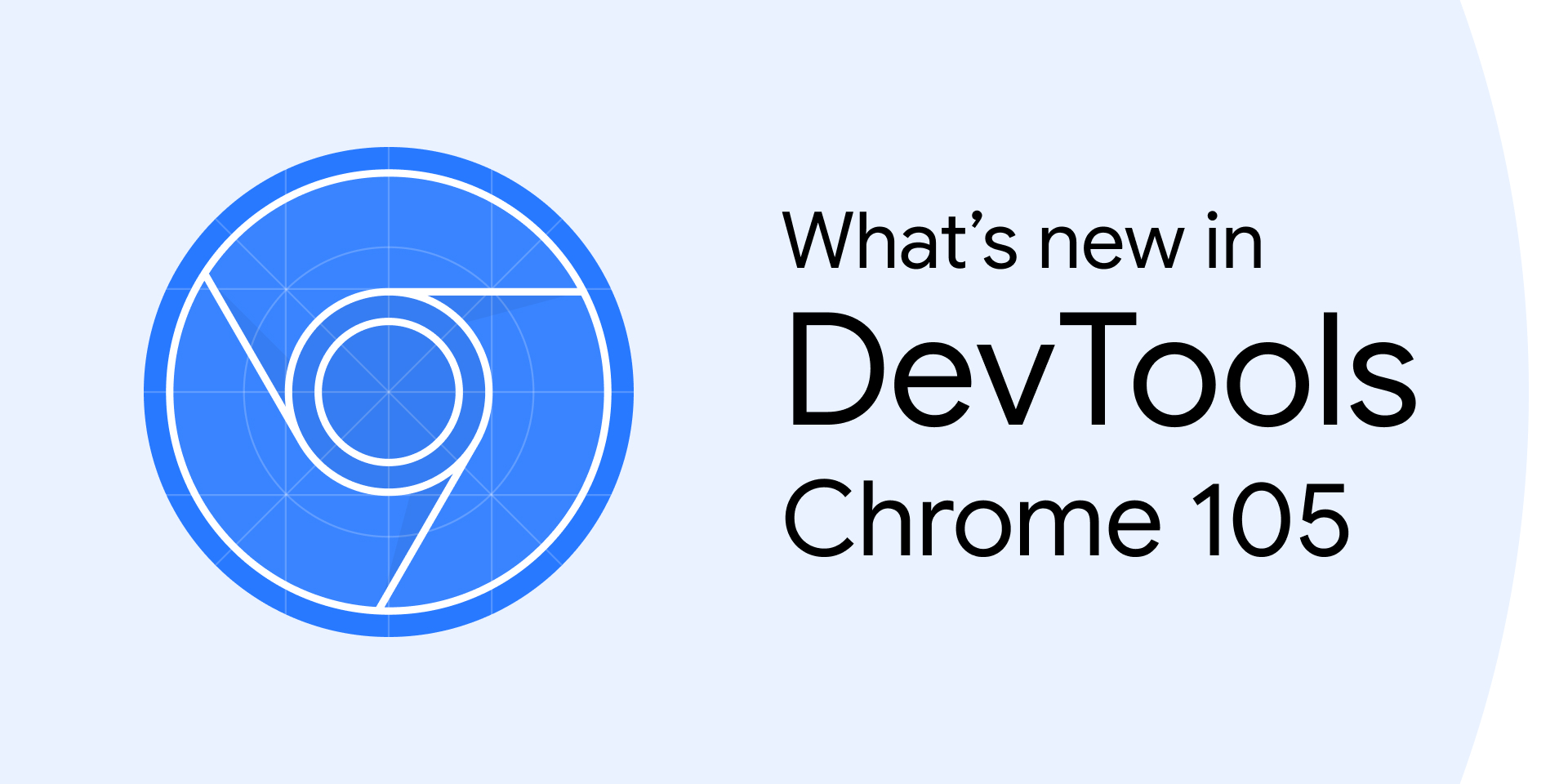 # Step-by-step replay in the Recorder

You can now set a breakpoint and replay a user flow step by step in the Recorder panel.

To set a breakpoint, click on the blue dot next to a step. Replay your user flow, the replay will pause before executing the step. From here, you can continue the replay, execute a step, or cancel the replay.

With this feature, you can fully visualize and debug your user flow with ease. 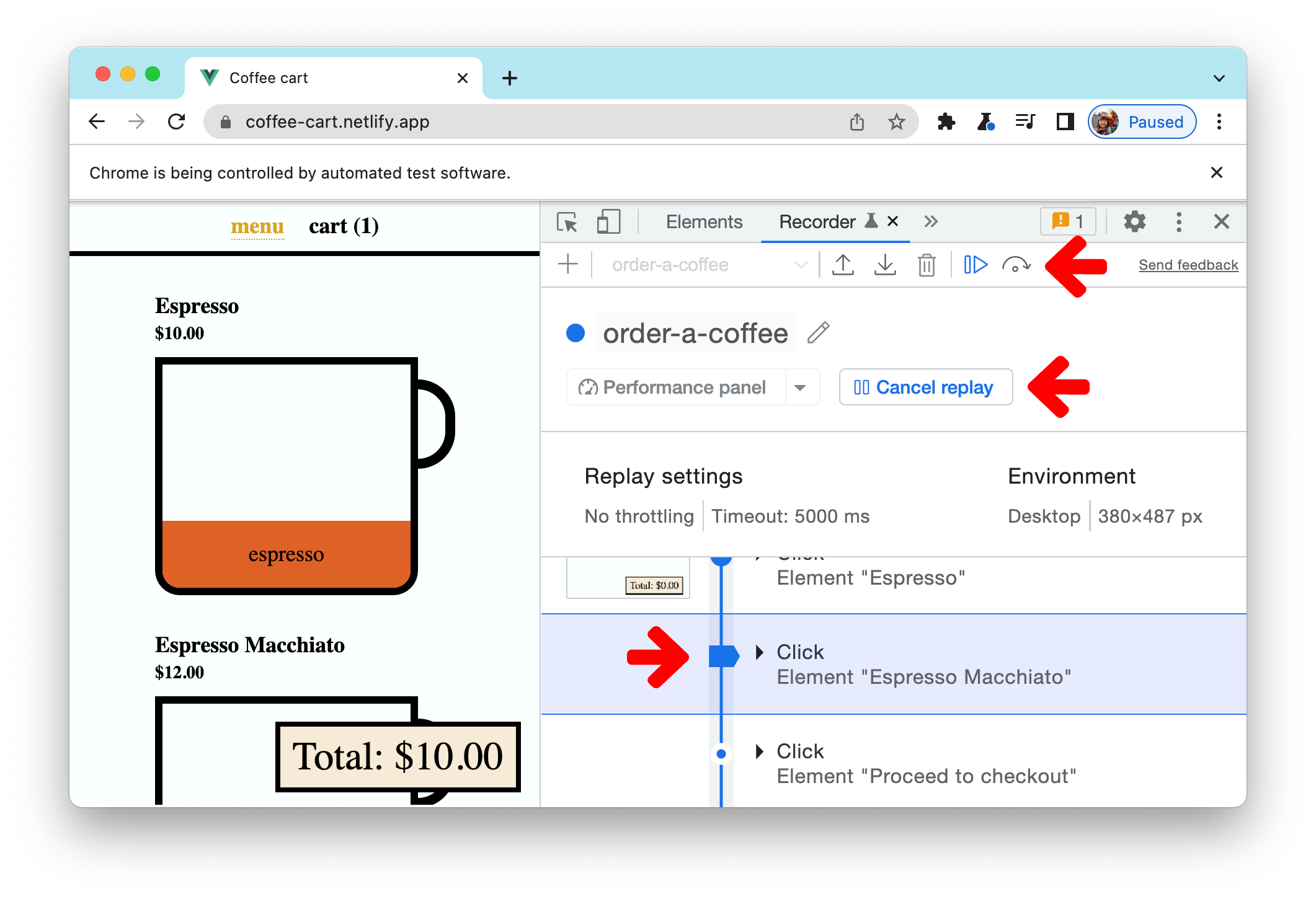 # Support mouse over event in the Recorder panel

The Recorder now supports adding a mouse over (hover) step manually in a recording.

This demo shows a pop up menu on hover. Try to record a user flow and click a menu item.

If you replay the user flow now, it will fail because the Recorder doesn’t capture mouse over events automatically during recording. To resolve this, add a step manually to hover over the selector before clicking the menu item. 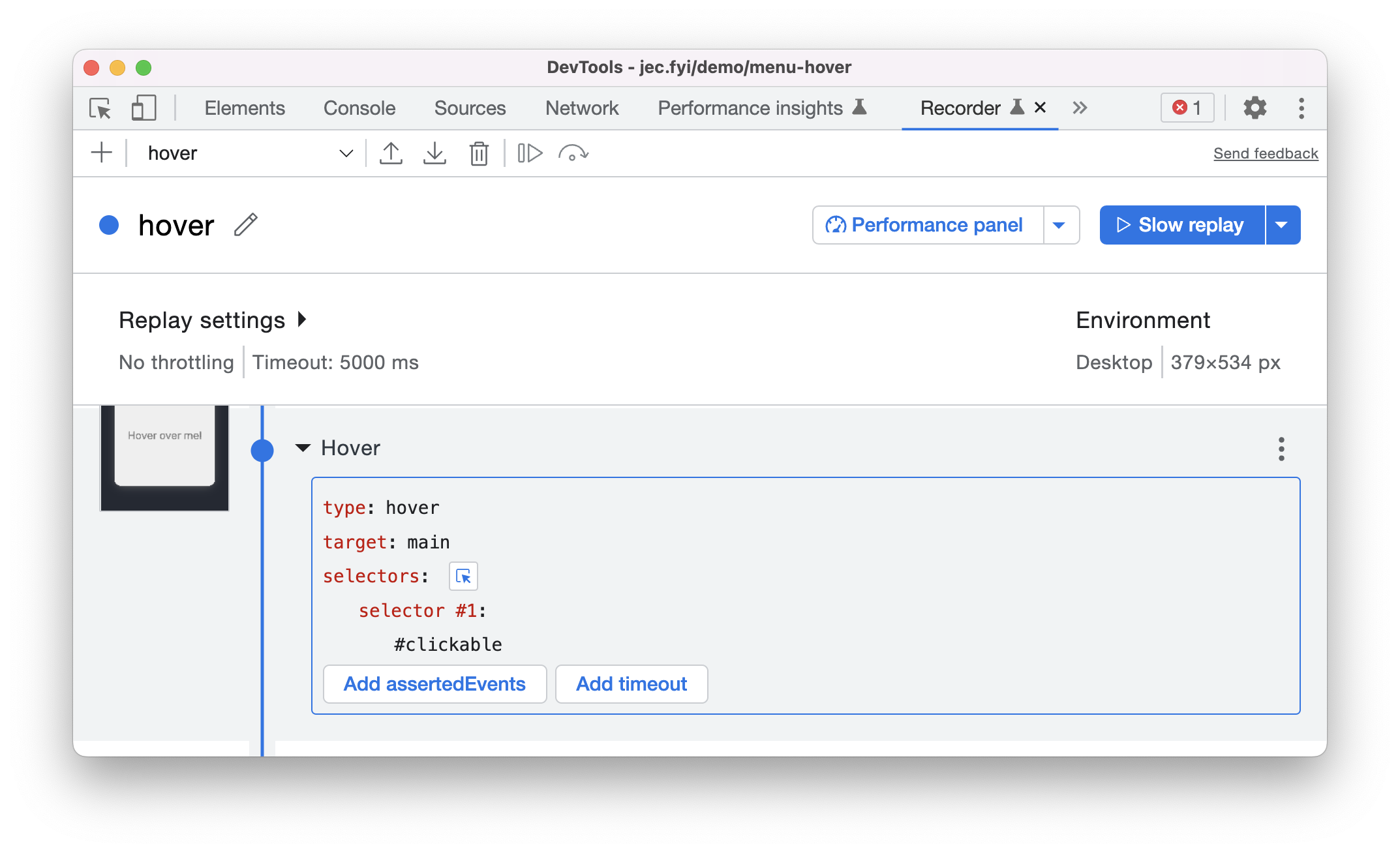 LCP is an important, user-centric metric for measuring perceived load speed. You can now find out the critical paths and root causes of a Largest Contentful Paint (LCP).

In a performance recording, click on the LCP badge in the Timeline. In the Details pane, you can view the LCP score, learn how to fix resources that slow down the LCP and see the critical path for the LCP resource.

See Performance Insights to learn how to get actionable insights and improve your website’s performance with the panel. 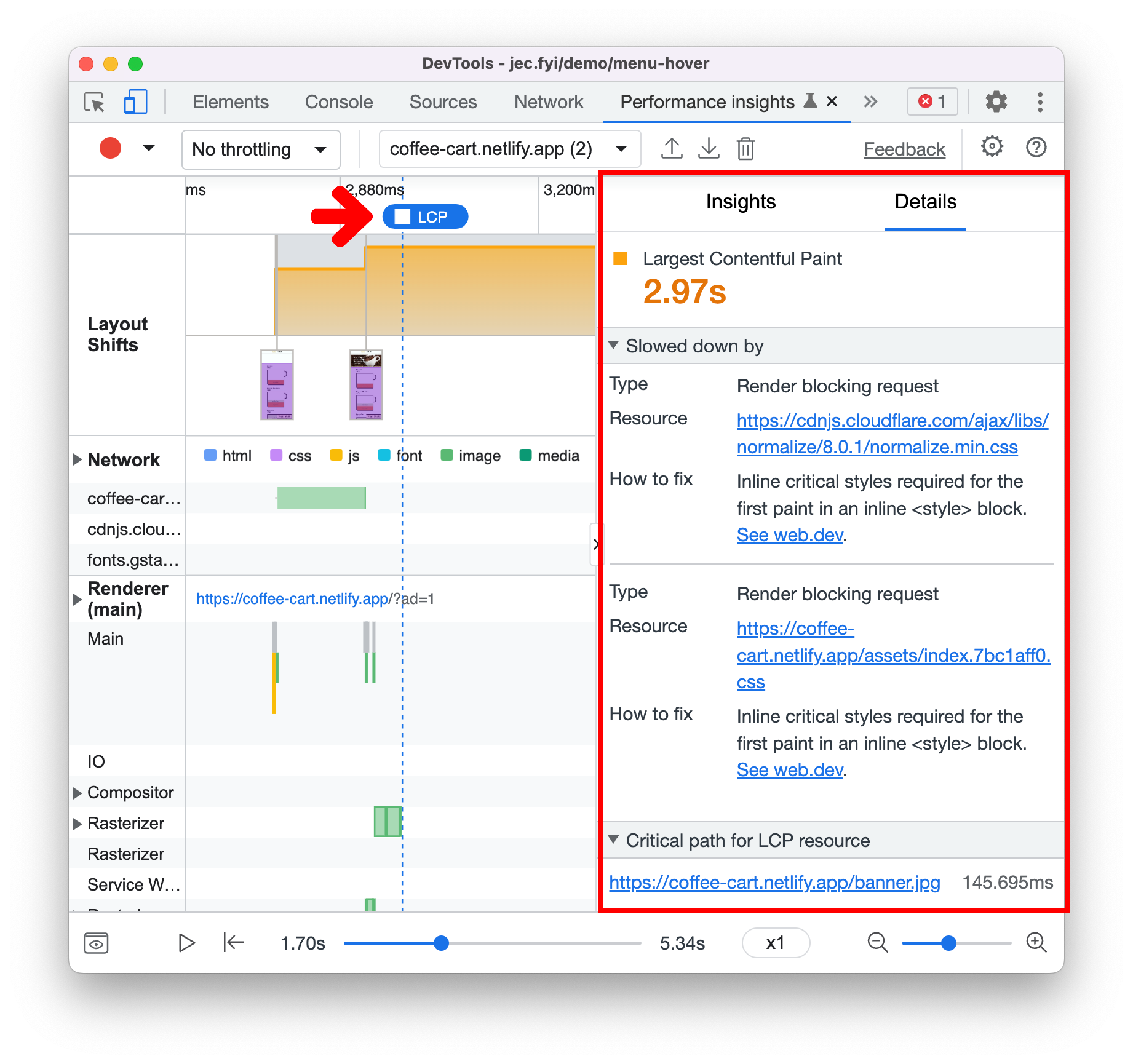 To view the potential root causes of a layout shift, click on a screenshot in the Layout shifts track. 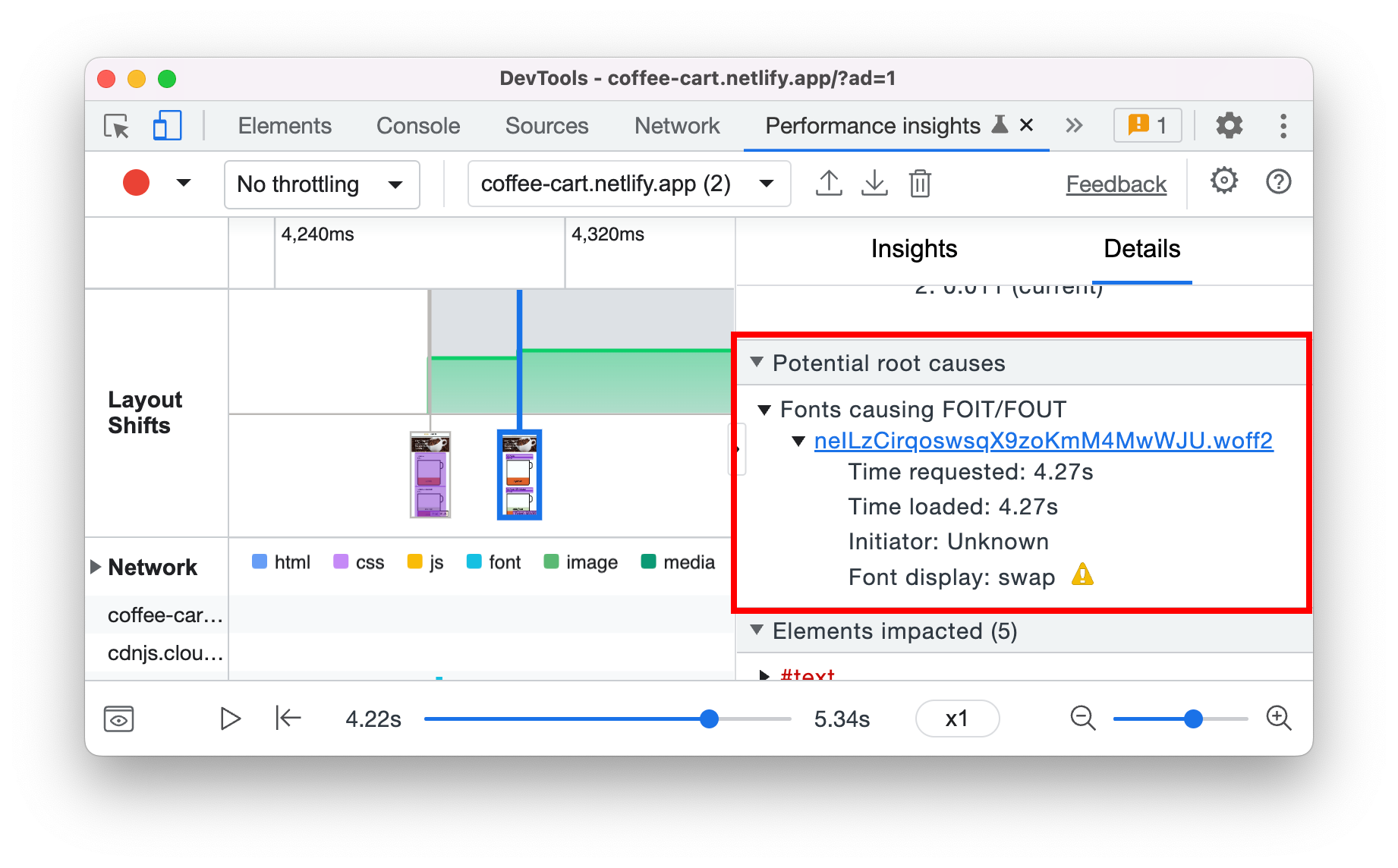 # Protocol handlers in the Manifest pane

You can now use DevTools to test the URL protocol handler registration for Progressive Web Apps (PWA).

Navigate to the Protocol Handlers section via the Application > Manifest pane. You can view and test all the available protocols here.

For example, install this demo PWA. In the Protocol Handlers section, type “americano” and click Test protocol to open the coffee page in the PWA. 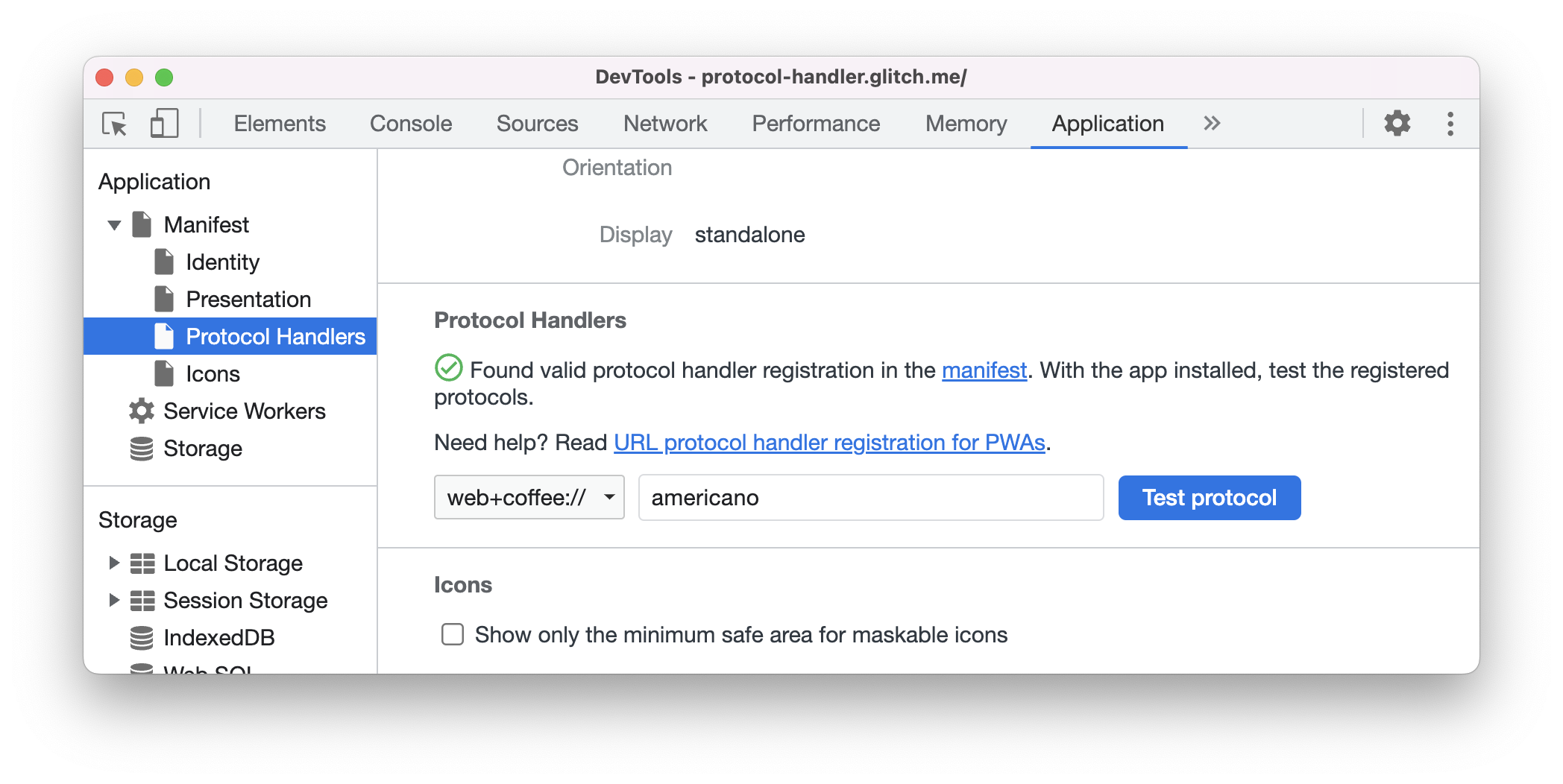 The <dialog> element has recently become stable across browsers. When you open a dialog, it is put into a top layer. Top level content renders on top of all the other content.

To help visualize the top layer elements, DevTools adds a top layer container (#top-layer) to the DOM tree. It resides after the closing </html> tag. 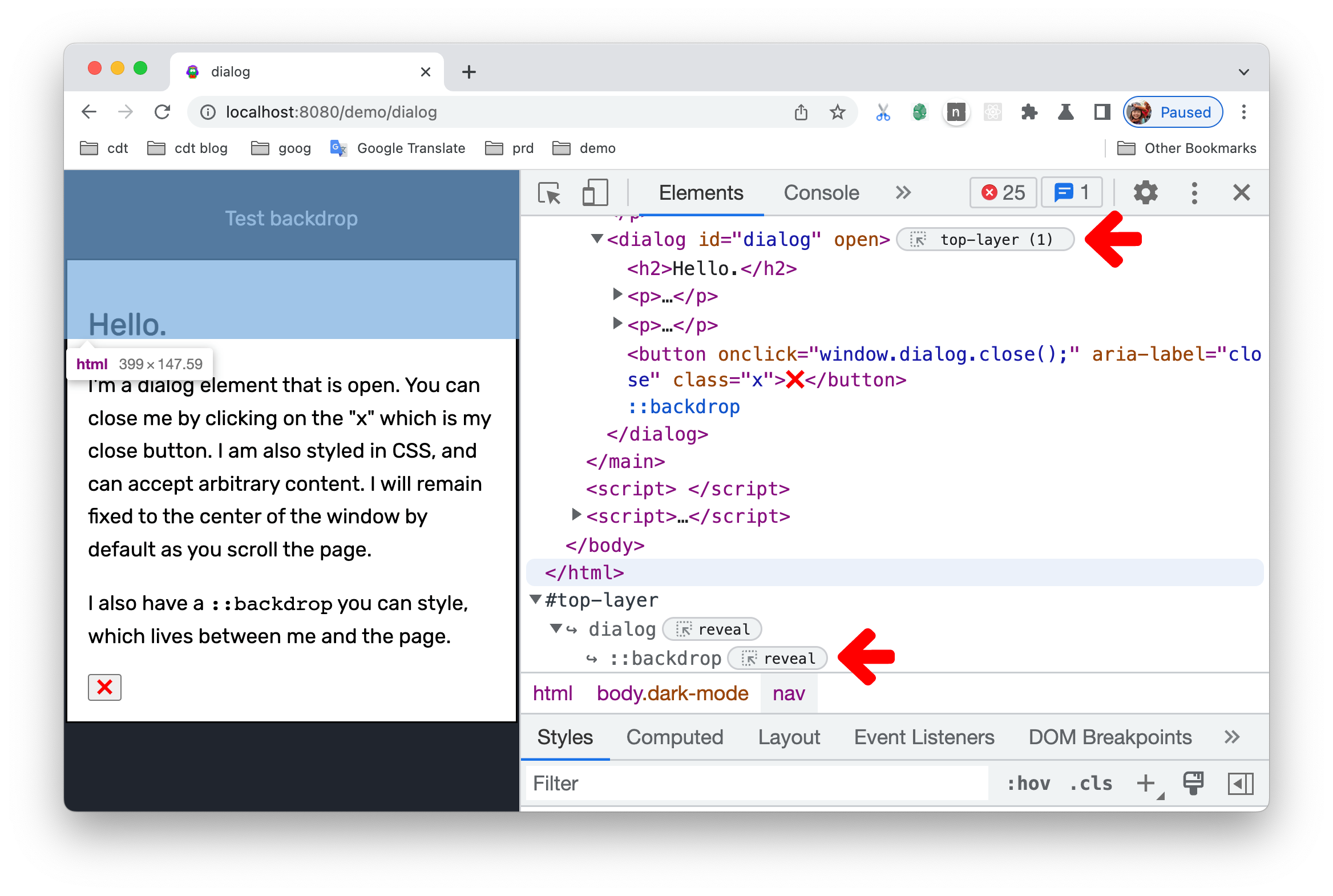 You can now attach DWARF debugging information for wasm during runtime. Previously, the Sources panel only supported attaching sourcemaps to JavaScript and Wasm files.

Open a Wasm file in the Sources panel. Right-click in the editor and select Add DWARF debugging info… to attach debugging information on demand. 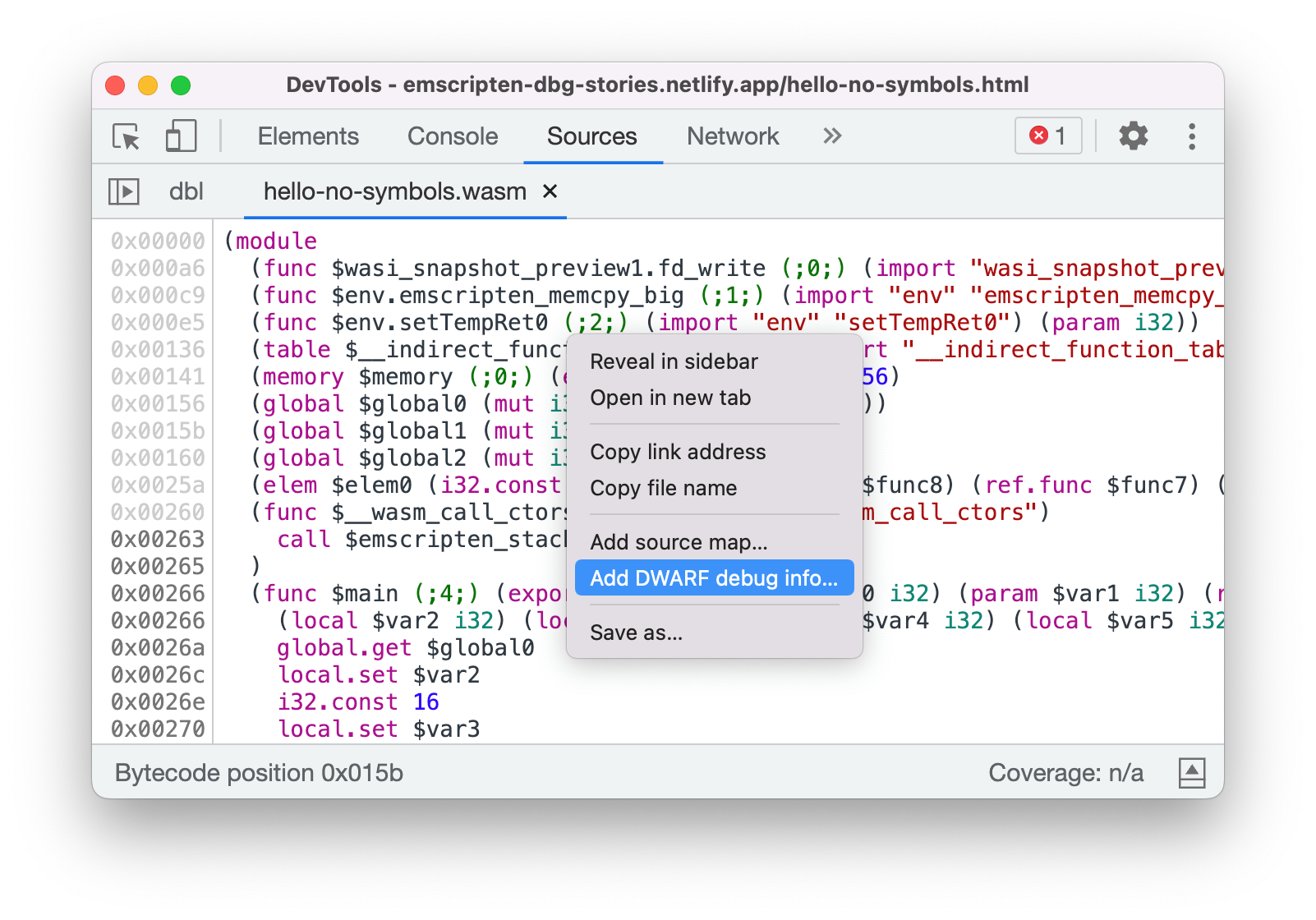 You can now edit the top-most function on the stack without restarting the debugger.

In Chrome 104, DevTools brings back the restart frame feature. However, you weren't able to edit the function you are currently paused in. It is common for developers to break in a function and then edit that function while paused.

With this update, the debugger automatically restarts the function with the following restrictions: 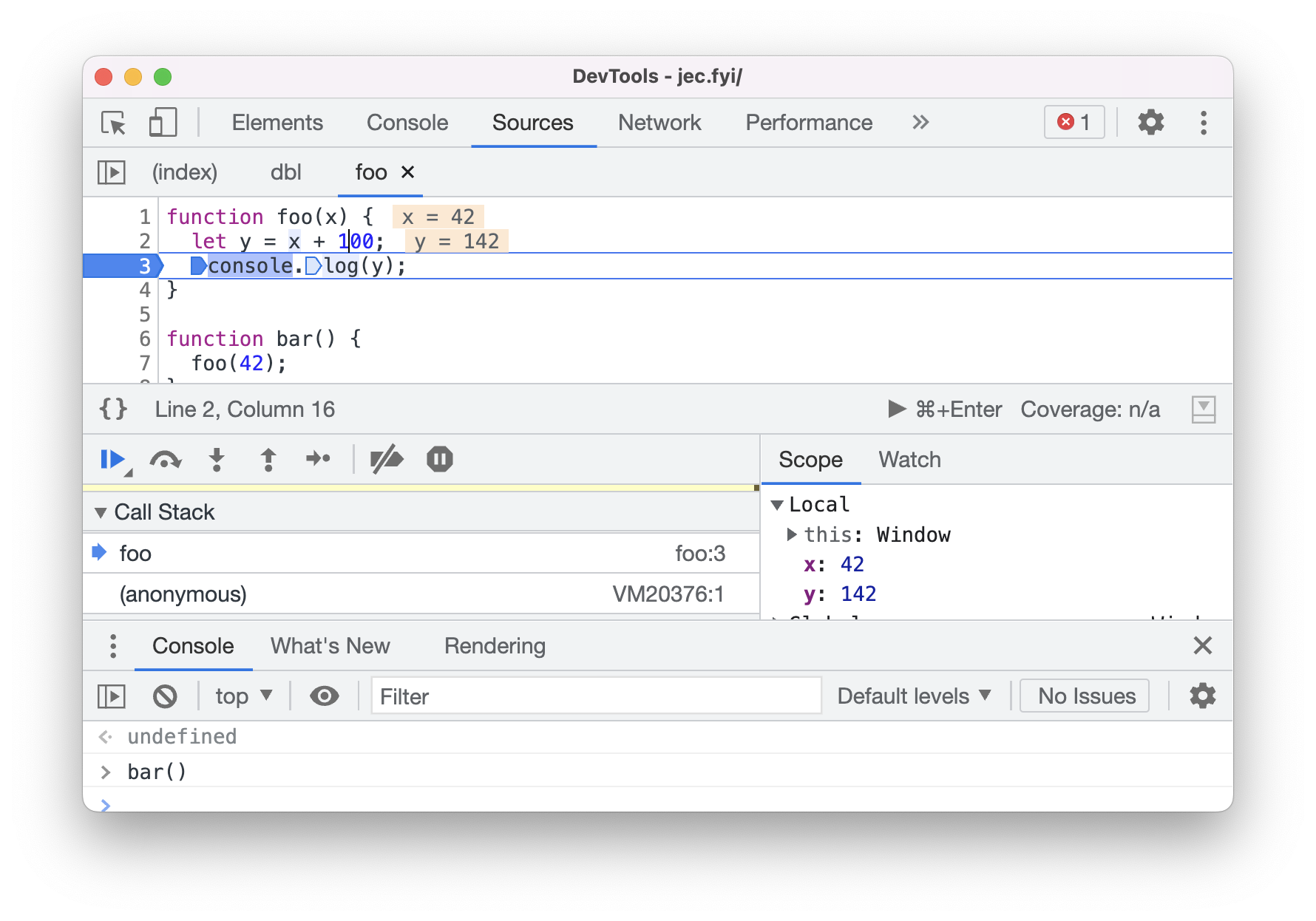 # View and edit @scope at rules in the Styles pane

You can now view and edit the CSS @scope at-rules in the Styles pane.

The @scope at rules is part of the CSS Cascading and Inheritance Level 6 specification. These rules allow developers to scope style rules in CSS.

Open this demo page and inspect the hyperlink within the <div class=”dark-theme”> element. In the Styles pane, view the @scope at-rules. Click the rule declaration to edit it.

The CSS @scope is currently under development. To test this feature, enable the Experimental Web Platform features flag via chrome://flags/#enable-experimental-web-platform-features. 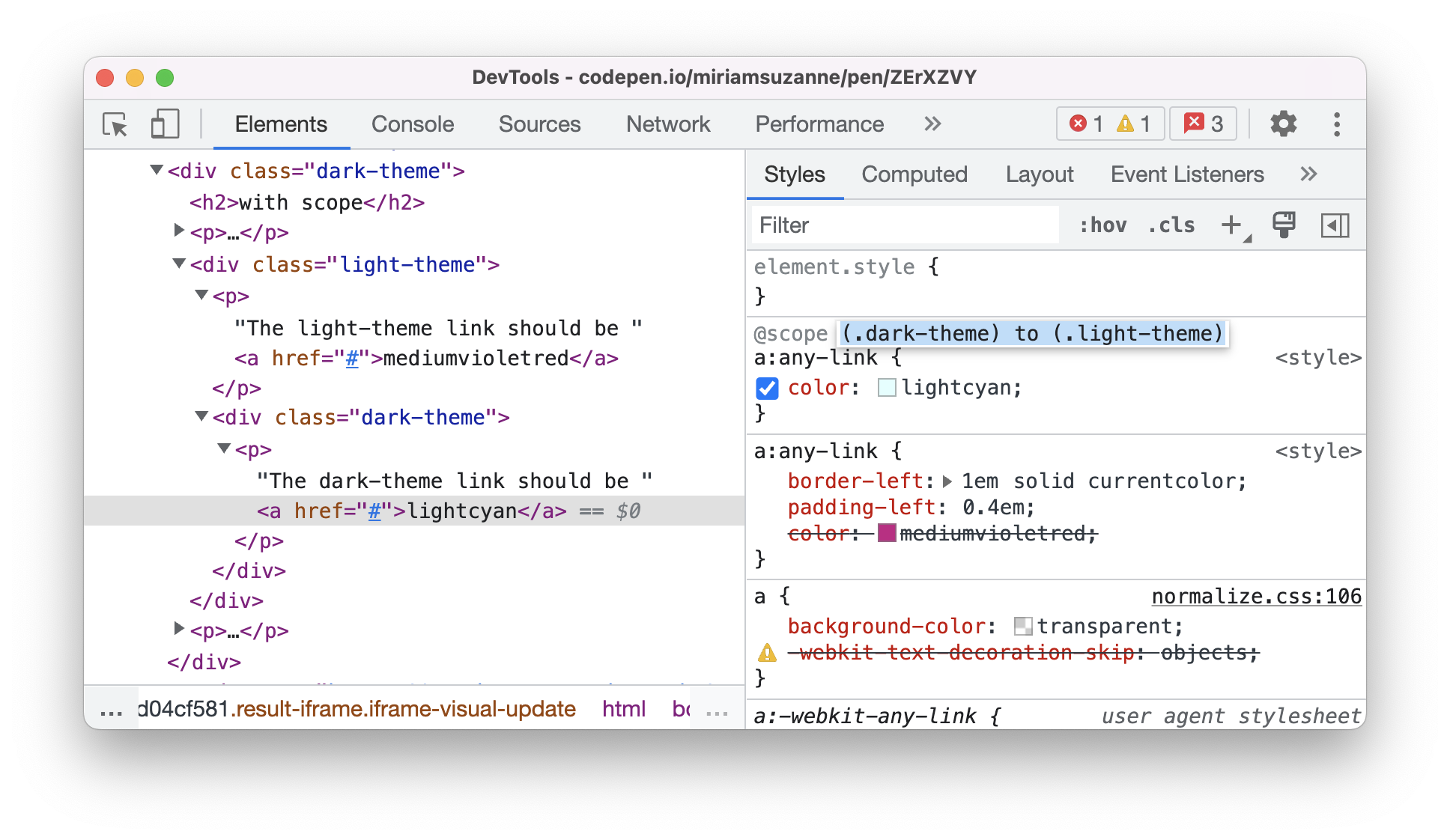 Here are a few fixes on sourcemaps to improve the overall debugging experience: