The code examples in this section describe a simple Native Client module that generates audio samples using a sine wave with a frequency of 440 Hz. The module starts playing the audio samples as soon as it is loaded into the browser. For a slightly more sophisticated example, see the audio example (source code in the SDK directory examples/api/audio), which lets users specify a frequency for the sine wave and click buttons to start and stop audio playback.

For reference information related to the Pepper audio API, see the following documentation:

About the Pepper audio API

The Pepper audio API lets Native Client modules play audio streams in a browser. To play an audio stream, a module generates audio samples and writes them into a buffer. The browser reads the audio samples from the buffer and plays them using an audio device on the client computer.

This mechanism is simple but low-level. If you want to play plain sound files in a web application, you may want to consider higher-level alternatives such as using the HTML <audio> tag, JavaScript, or the new Web Audio API.

The Pepper audio API is a good option for playing audio data if you want to do audio processing in your web application. You might use the audio API, for example, if you want to apply audio effects to sounds, synthesize your own sounds, or do any other type of CPU-intensive processing of audio samples. Another likely use case is gaming applications: you might use a gaming library to process audio data, and then simply use the audio API to output the processed data.

The Pepper audio API is straightforward to use:

This basic interaction is illustrated below, and described in detail in the sections that follow. 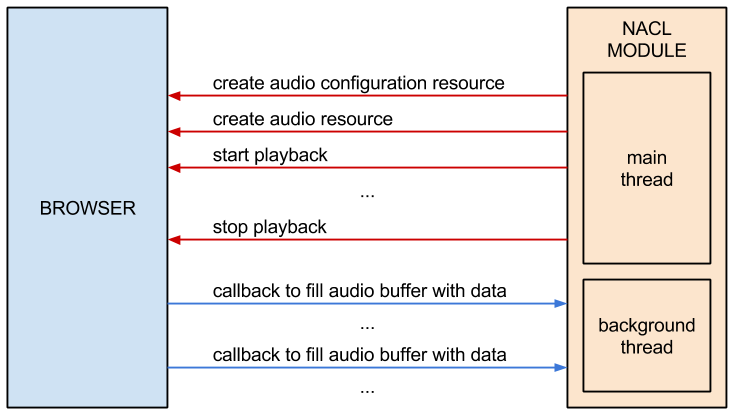 Before you use the Pepper audio API, it’s helpful to understand a few concepts that are fundamental to how digital audio is recorded and played back:

The higher the sample rate and bit depth used to record a sound wave, the more accurately the sound wave can be reproduced, since it will have been sampled more frequently and stored using a higher level of quantization. Common sampling rates include 44,100 Hz (44,100 samples/second, the sample rate used on CDs), and 48,000 Hz (the sample rate used on DVDs and Digital Audio Tapes). A common bit depth is 16 bits per sample, and a common number of channels is 2 (left and right channels for stereo sound).

Setting up the module

The code examples below describe a simple Native Client module that generates audio samples using a sine wave with a frequency of 440 Hz. The module starts playing the audio samples as soon as it is loaded into the browser.

The Native Client module is set up by implementing subclasses of the pp::Module and pp::Instance classes, as normal.

Before the module can play an audio stream, it must create two resources: an audio configuration resource and an audio resource. Resources are handles to objects that the browser provides to module instances. An audio resource is an object that represents the state of an audio stream, including whether the stream is paused or being played back, and which callback function to invoke when the samples in the stream’s buffer run out. An audio configuration resource is an object that stores configuration data for an audio resource, including the sampling frequency of the audio samples, and the number of samples that the callback function must provide when the browser invokes it.

Once the module has created an audio configuration resource, it can create an audio resource. To do so, it instantiates a pp::Audio object, passing in a pointer to the module instance, the audio configuration resource, a callback function, and a pointer to user data (data that is used in the callback function). See the example above.

The last parameter passed to the callback function is generic user data that the function can use in processing samples. In the example below, the user data is a pointer to the module instance, which includes member variables sample_frame_count_ (the sample frame count obtained from the browser) and theta_ (the last angle that was used to compute a sine value in the previous callback; this lets the function generate a smooth sine wave by starting at that angle plus a small delta).

One other issue to be aware of is that the StartPlayback function (discussed below) is an asynchronous RPC; i.e., it does not block. That means that the callback function may not be called immediately after the call to StartPlayback. If it’s important to synchronize the callback thread with another thread so that the audio stream starts playing simultaneously with another action in your application, you must handle such synchronization manually.

To start and stop audio playback, the module simply reacts to JavaScript messages.