This section describes how to use the FileIO API to read and write files using a local secure data store.

You might use the File IO API with the URL Loading APIs to create an overall data download and caching solution for your NaCl applications. For example:

The example discussed in this section is included in the SDK in the directory examples/api/file_io.

For reference information related to FileIO, see the following documentation:

Chrome provides an obfuscated, restricted area on disk to which a web app can safely read and write files. The Pepper FileIO, FileRef, and FileSystem APIs (collectively called the File IO APIs) allow you to access this sandboxed local disk so you can read and write files and manage caching yourself. The data is persistent between launches of Chrome, and is not removed unless your application deletes it or the user manually deletes it. There is no limit to the amount of local data you can use, other than the actual space available on the local drive.

The easiest way to enable the writing of persistent local data is to include the unlimitedStorage permission in your Chrome Web Store manifest file. With this permission you can use the Pepper FileIO API without the need to request disk space at run time. When the user installs the app Chrome displays a message announcing that the app writes to the local disk.

If you do not use the unlimitedStorage permission you must include JavaScript code that calls the HTML5 Quota Management API to explicitly request local disk space before using the FileIO API. In this case Chrome will prompt the user to accept a requestQuota call every time one is made.

The Native Client SDK includes an example, file_io, that demonstrates how to read and write a local disk file. Since you will probably run the example from a local server without a Chrome Web Store manifest file, the example’s index file uses JavaScript to perform the Quota Management setup as described above. The example has these primary files:

The remainder of this section covers the code in the file_io.cc file for reading and writing files.

Like many Pepper APIs, the File IO API includes a set of methods that execute asynchronously and that invoke callback functions in your Native Client module. Unlike most other examples, the file_io example also demonstrates how to make Pepper calls synchronously on a worker thread.

It is illegal to make blocking calls to Pepper on the module’s main thread. This restriction is lifted when running on a worker thread—this is called “calling Pepper off the main thread”. This often simplifies the logic of your code; multiple asynchronous Pepper functions can be called from one function on your worker thread, so you can use the stack and standard control flow structures normally.

The high-level flow for the file_io example is described below. Note that methods in the namespace pp are part of the Pepper C++ API.

Creating and writing a file

Following are the high-level steps involved in creating and writing to a file:

Opening and reading a file

Following are the high-level steps involved in opening and reading a file:

Deleting a file is straightforward: call pp::FileRef::Delete. The thread is blocked until Delete completes.

Making a directory is also straightforward: call pp::File::MakeDirectory. The thread is blocked until MakeDirectory completes.

Listing the contents of a directory

Following are the high-level steps involved in listing a directory: 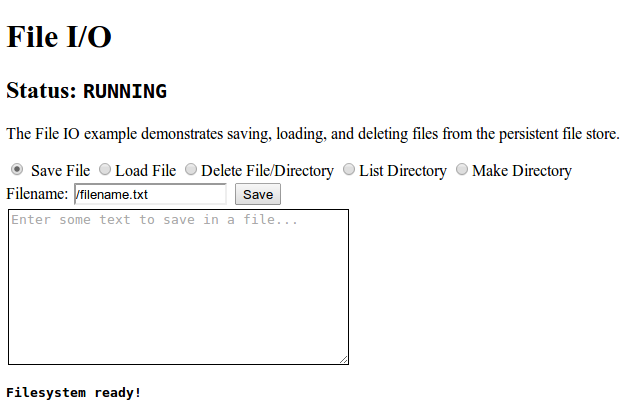 Each radio button is a file operation you can perform, with some reasonable default values for filenames. Try typing a message in the large input box and clicking Save, then switching to the Load File operation, and clicking Load.

Let’s take a look at what is going on under the hood.

Opening a file system and preparing for file I/O

pp::Instance::Init is called when an instance of a module is created. In this example, Init starts a new thread (via the pp::SimpleThread class), and tells it to open the filesystem:

Note that the call to pp::FileSystem::Open uses pp::BlockUntilComplete as its callback. This is only possible because we are running off the main thread; if you try to make a blocking call from the main thread, the function will return the error PP_ERROR_BLOCKS_MAIN_THREAD.

When you click the Save button, JavaScript posts a message to the NaCl module with the file operation to perform sent as a string (See Messaging System for more details on message passing). The string is parsed by HandleMessage, and new work is added to the file thread:

FileIoInstance::Save is called when the Save button is pressed. First, it checks to see that the FileSystem has been successfully opened:

Next, a pp::FileIO resource is created and opened. The call to pp::FileIO::Open passes PP_FILEOPEFLAG_WRITE to open the file for writing, PP_FILEOPENFLAG_CREATE to create a new file if it doesn’t already exist and PP_FILEOPENFLAG_TRUNCATE to clear the file of any previous content:

Now that the file is opened, it is written to in chunks. In an asynchronous model, this would require writing a separate function, storing the current state on the free store and a chain of callbacks. Because this function is called off the main thread, pp::FileIO::Write can be called synchronously and a conventional do/while loop can be used:

Finally, the file is flushed to push all changes to disk:

FileIoInstance::Load is called when the Load button is pressed. Like the Save function, Load first checks to see if the FileSystem has been successfully opened, and creates a new FileRef:

Next, Load creates and opens a new FileIO resource, passing PP_FILEOPENFLAG_READ to open the file for reading. The result is compared to PP_ERROR_FILENOTFOUND to give a better error message when the file doesn’t exist:

Then Load calls pp::FileIO::Query to get metadata about the file, such as its size. This is used to allocate a std::vector buffer that holds the data from the file in memory:

Similar to Save, a conventional while loop is used to read the file into the newly allocated buffer:

Finally, the contents of the file are sent back to JavaScript, to be displayed on the page. This example uses “DISP|” as a prefix command for display information:

FileIoInstance::Delete is called when the Delete button is pressed. First, it checks whether the FileSystem has been opened, and creates a new FileRef:

Unlike Save and Load, Delete is called on the FileRef resource, not a FileIO resource. Note that the result is checked for PP_ERROR_FILENOTFOUND to give a better error message when trying to delete a non-existent file:

Listing files in a directory

FileIoInstance::List is called when the List Directory button is pressed. Like all other operations, it checks whether the FileSystem has been opened and creates a new FileRef:

Unlike the other operations, it does not make a blocking call to pp::FileRef::ReadDirectoryEntries. Since ReadDirectoryEntries returns the resulting directory entries in its callback, a new callback object is created pointing to FileIoInstance::ListCallback.

The pp::CompletionCallbackFactory template class is used to instantiate a new callback. Notice that the FileRef resource is passed as a parameter; this will add a reference count to the callback object, to keep the FileRef resource from being destroyed when the function finishes.

FileIoInstance::ListCallback then gets the results passed as a std::vector of pp::DirectoryEntry objects, and sends them to JavaScript:

FileIoInstance::MakeDir is called when the Make Directory button is pressed. Like all other operations, it checks whether the FileSystem has been opened and creates a new FileRef:

Then the pp::FileRef::MakeDirectory function is called.