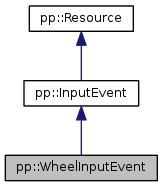 If the given event is itself is_null() or is not a wheel input event, the wheel object will be is_null().

Constructs a wheel input even from the given parameters.

GetDelta() returns the amount vertically and horizontally the user has requested to scroll by with their mouse wheel.

This amount is system dependent and will take into account the user's preferred scroll sensitivity and potentially also nonlinear acceleration based on the speed of the scrolling.

Devices will be of varying resolution. Some mice with large detents will only generate integer scroll amounts. But fractional values are also possible, for example, on some trackpads and newer mice that don't have "clicks".

GetScrollByPage() indicates if the scroll delta x/y indicates pages or lines to scroll by.

Returns:
true if the event is a wheel event and the user is scrolling by pages, false if not or if the resource is not a wheel event.

GetTicks() returns the number of "clicks" of the scroll wheel that have produced the event.

The value may have system-specific acceleration applied to it, depending on the device. The positive and negative meanings are the same as for GetDelta().

If you are scrolling, you probably want to use the delta values. These tick events can be useful if you aren't doing actual scrolling and don't want or pixel values. An example may be cycling between different items in a game.

Returns:
The number of "clicks" of the scroll wheel. You may receive fractional values for the wheel ticks if the mouse wheel is high resolution or doesn't have "clicks". If your program wants discrete events (as in the "picking items" example) you should accumulate fractional click values from multiple messages until the total value reaches positive or negative one. This should represent a similar amount of scrolling as for a mouse that has a discrete mouse wheel.

The documentation for this class was generated from the following file: