How you can help develop and test new privacy-preserving technologies

This update on the Privacy Sandbox was announced at the Chrome Developers Summit 2021 keynote.

We also see regulators around the world stepping up privacy requirements at a rapid pace. 65% of the world's population is expected to be covered under modern privacy regulations by 2023, up from 10% in 2020, according to Gartner, Inc.

However, many common web functions rely on third-party cookies and other cross-site tracking mechanisms that weren't designed with privacy in mind. We need new technologies for a modern, privacy-focused web. That's what the Privacy Sandbox is about.

We're working with the web community and industry stakeholders to develop new privacy-preserving technologies that can support a healthy, sustainable ecosystem. This includes purpose-built APIs to support advertising, a critical part of the ecosystem which funds much of the web's content, as well as other capabilities such as fraud detection, identity, or delivering content that's customized to a user's device. 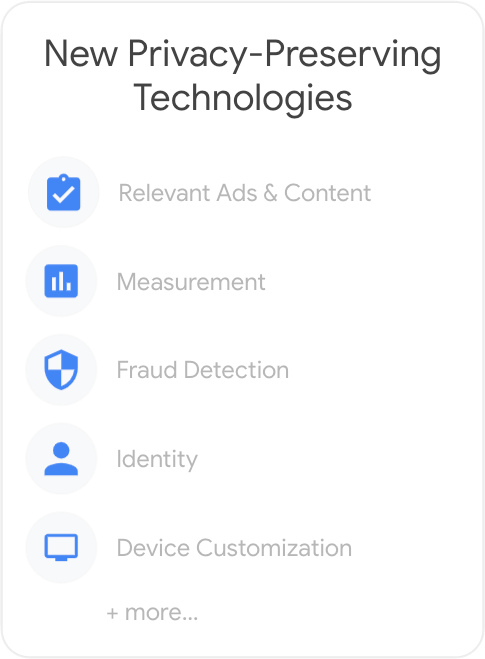 Many of the common web functions described above weren't built into the web platform, but instead have been layered over it with general-purpose technologies such as third-party cookies.

When we design APIs for each specific use case, we can ensure appropriate privacy protections, give people more useful controls, and ideally improve each API over time.

Once these new APIs are in place, we'll make sure developers have time to adopt them so that we can safely phase out support for third-party cookies in Chrome, while continuing our work to mitigate other types of tracking. This approach helps ensure cross-site tracking doesn't simply shift from third-party cookies to more covert methods.

There is a large amount of ecosystem input shaping this work, at every stage of development. This process may be familiar to web developers, but may be new to other industry stakeholders who will use these purpose-built APIs – and whose expertise is critical to this initiative.

There have been dozens of privacy-preserving proposals offered by Chrome and others over the last couple of years. You can read these proposals, ask questions, offer ideas to improve them and see what others are saying.

To find conversations where the proposed solutions are being discussed and debated together, there are a number of W3C groups you can join or monitor, depending on the use cases you're interested in:

The discussion stage can be highly involved.

For example, FLEDGE is a proposal to support interest-based advertising without cross-site tracking. With input from privacy advocates and many industry stakeholders, FLEDGE has evolved from two previous proposals (PIGIN and TURTLEDOVE). More than one hundred organizations have joined W3C meetings to help refine the current version, plus over 200 online discussion threads.

There have also been more than half a dozen other proposals offered by other companies, in the same solution space. Through continued collaboration, we hope to define a path forward.

At the same time, we're starting developer testing for the initial version of FLEDGE behind a flag in Chrome so developers can get their hands on it.

Not every proposal will go through such an intense incubation period as FLEDGE – some will move much more quickly – but there is a lot of innovation happening. These are new ideas and it can take a lot of work to get them right.

Testing is critical because it surfaces issues or gaps that may require more work. There will be many iterative cycles of discussion and testing. There are a handful of proposals ready for developer testing today and more will be available for review as we head into 2022.

Testing in Chrome usually starts with a feature behind a flag for developers to test locally. This means developers need to turn it on in the browser to try it out. This code is often very fresh, so you can expect to find issues.

We also run origin trials, each of which run for a limited time with a limited population of Chrome users. Origin trials are public and open to all developers – you just need to register to opt in your site or service. This is when we get actionable feedback from developers on what works, what doesn't, and where those gaps are.

Success at this stage depends both on developers doing hands-on testing and being willing to share what they learn.

For example, Yahoo! JAPAN published a detailed analysis of their test of the Attribution Reporting API. They highlighted areas for improvement like the need for a better way to deliver conversion reports, which has now been added to the API.

We also hope to see companies talking about their approach to testing and how they expect to use an API.

In the origin trial for the first version of FLoC – a proposal to support interest-based advertising and content – we saw companies like CafeMedia publishing their analysis and insights so that others could review what they'd learned.

Chrome tests aren't the only way to explore how new technologies might work. Some companies are also building simulations based on Privacy Sandbox concepts.

Advertising platform Criteo recently ran a competition with more than 150 teams testing different machine learning models to evaluate how differential privacy concepts such as noise insertion and aggregation might impact advertising performance. It's helpful to examine these concepts since they underlie several of the Privacy Sandbox APIs.

We're truly appreciative of the companies investing their time to test these new technologies, and being willing to share their perspectives and lessons publicly.

Once an API is tested and ready for general use in Chrome, we'll announce the launch and make sure public documentation is ready for scaled ecosystem adoption.

User-Agent Client Hints (UA-CH) launched in Chrome earlier this year and is now ready to scale. It's part of the Privacy Sandbox work stream to reduce covert tracking such as browser fingerprinting.

Like cookies, the User-Agent (UA) string is an early web feature. By default, it provides a lot of information about the user's browser and device, making it a readily available surface for fingerprinting. It also has a format that can be a headache to parse! 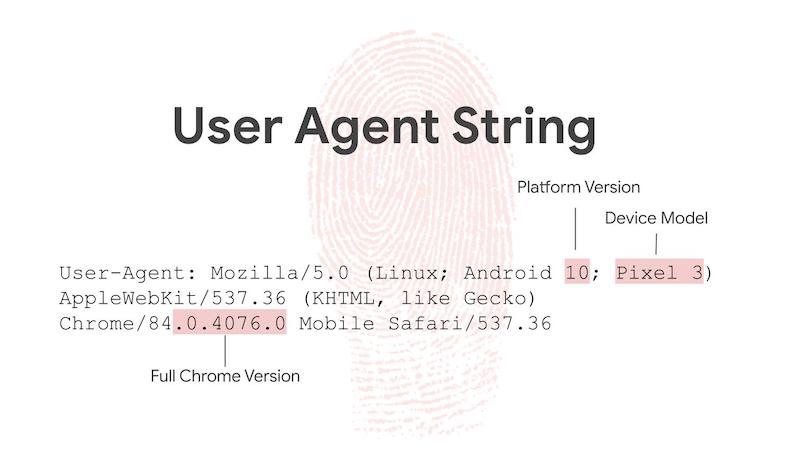 To get this information in the future, you'll need to transition to UA-CH. The User-Agent string will give you some information by default, which may cover most of your use cases, but more detailed information is available only on request in a straightforward format.

We were happy to make this ergonomic improvement for developers while moving the majority of UA information from an "available by default" model to an "on request" model. This way, you can request only the information you need. This is a good privacy practice today, and the pattern we want to set for the future.

In April 2022, gradual UA string reduction will begin in Chrome. UA-CH launched and was ready for scaled adoption starting in March of 2021—you can begin testing and migrating to it now. Participate in an origin trial to opt-in to the reduced UA string so you can see what the future state looks like.

If it turns out you need extra time to address your site needs, you'll be able to opt-in to keep using the User Agent string as-is through March 2023.

# Wrap up and feedback

We'll continue to explain what's happening, provide as much forward visibility as we can, encourage your involvement, and hear your input. Let us know on @ChromiumDev Twitter if there's anything that we could improve.

We've added a Privacy Sandbox FAQ, which we will continue to expand based on the issues you submit to the developer support repo. If you have any questions around testing or implementation on any of the proposals, come talk to us there.

We appreciate all contributions to this complex and vitally important project. As we seek to create durable web features with broad utility and robust privacy protections for users, it's worth this effort to get the foundations right.