Getting started with Chrome's origin trials

Origin trials are a way to test a new or experimental web platform feature, and give feedback to the web standards community on the feature's usability, practicality, and effectiveness, before the feature is made available to all users.

Origin trials give you access to a new or experimental feature, to build functionality your users can try out for a limited time before the feature is made available to everyone.

When Chrome offers an origin trial for a feature, you can register for the trial to enable the feature for all users on your origin, without requiring them to toggle any flags or switch to an alternative build of Chrome (though they may need to upgrade). Origin trials enable developers to build demos and prototypes using new features. The trials also help Chrome engineers understand how new features are used, and how they may interact with other web technologies.

Origin trials are public and open to all developers. They are limited in duration and usage. Participation is a self-managed process with limited documentation and support. Participants should be willing and able to work relatively independently using the documentation available, which, at this stage, will likely be limited to API specifications and explainers, though we try to provide guidance whenever possible.

If you register for a trial, the Chrome team will periodically ask you for specific feedback on your use of the trial feature. Some features may undergo multiple origin trials, as feedback is incorporated and adjustments are made.

Origin trials are usually only available on a first-party basis: they only work for a single registered origin. Third-party origin trials make it possible for providers of embedded content to try a new feature across multiple sites without requiring a token for every origin.

Find out more: What are third-party origin trials?

Not all origin trials are for testing new APIs. Some trials enable a deprecated feature to be temporarily re-enabled. These are known as deprecation trials, and in some contexts have been referred to as "reverse" origin trials.

For example, from Chrome 85 AppCache is no longer available in Chrome by default. Sites needing extra time to migrate off AppCache could register for the deprecation trial to continue using AppCache until Chrome 93.

# Take part in an origin trial

The origin trials framework looks for the first valid token and then ignores all other tokens. You can validate this with Chrome DevTools.

Instead of providing a token as an HTTP header or as a meta tag in the HTML of your page, as described earlier, you can inject a token with JavaScript:

Use this method if you're participating in a third-party trial.

Usually if an API lands unchanged after a successful origin trial, there is a short period between the end of the origin trial and the date the implementation ships in the browser when the API is unavailable. This is by design. If Chrome were to avoid the mandatory total-breakage period, that would bias toward avoiding breakages in the API surface. Such breakages are often needed to improve the API. The final shipping API might be worse for it.

In some circumstances, if there was clear evidence that developers engaged with the origin trial and that their concerns were taken into account in the final API design and implementation, this breakage period may be skipped upon request.

View information about the origin trials available to a page from the Application panel in Chrome DevTools. 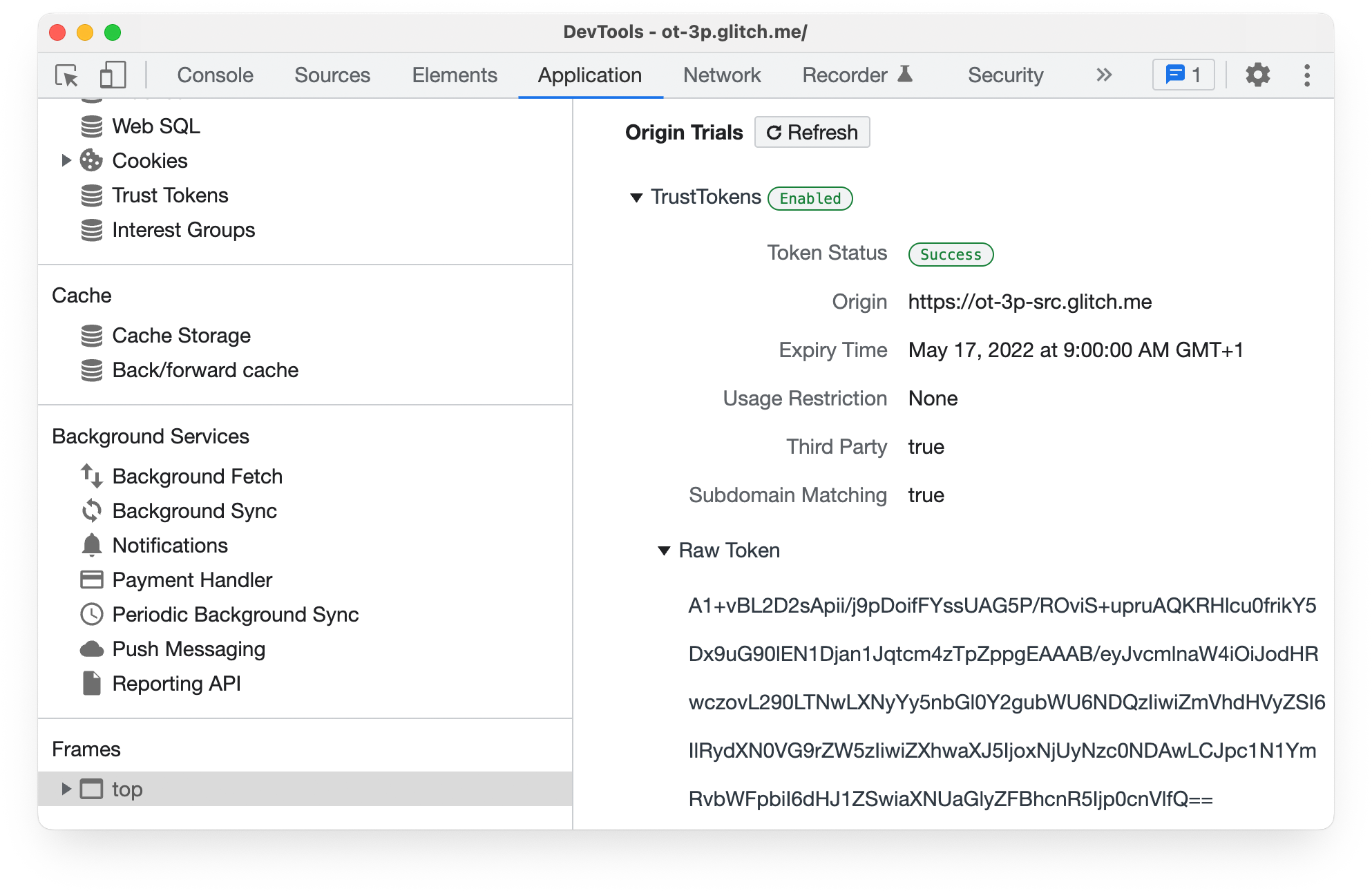