While the service worker lifecycle ensures a predictable installation and update process, it can make the local development cycle a little more nuanced.

In the typical local development cycle, developers save changes to files in a text editor, then switch to the browser to verify changes, and the process repeats. When a service worker is in the mix, this cycle is largely the same, but there may be differences between what the developer expects and what the browser does.

However, it's not unusual for developers to specify local hostnames aside from localhost in a hosts file. This is required in local development environments when multiple projects require separate hostnames. In these cases, provisioning a self-signed certificate will do.

A more convenient workaround is to instruct the browser to make exceptions for service worker testing. For Chrome, navigate to chrome://flags/#unsafely-treat-insecure-origin-as-secure and specify insecure origins to treat as secure origins. Firefox offers a way to test service workers on insecure origins through the devtools.serviceWorkers.testing.enabled setting in about:config.

While treating insecure local hostnames as secure shouldn't be risky for local development, never instruct users to use this tool. It's meant for developers only!

Local development with a service worker in the mix can lead to seemingly unexpected behaviors. For example, let's say a cache-only strategy is in place for unversioned static assets, or a precached "you're offline" page that's expected to update on reload after making changes. Because a stale version of those assets are always being served from a Cache instance, they seemingly never update! Frustrating as this is, the service worker is only doing what it was built to do, but there are some ways to make testing easier.

With this process, you're faithfully mimicking the service worker lifecycle.

Other testing tools available in the Chrome DevTools Application panel can help—though they can modify the service worker lifecycle in some ways.

It may be tempting to rely on the "Update for reload" checkbox during local development. In fact, it's quite useful. Unfortunately, it's easy to leave on, and fundamentally changes how the service worker lifecycle works as long as it's checked and Chrome's DevTools are open. Our recommendation is to avoid making this feature a central part of testing service workers.

These are helpful toggles, particularly Bypass for network, which is great when you're developing a project with an active service worker, but also want to ensure that the experience works as expected without a service worker.

Firefox has a similar application panel in its developer tools, but the functionality is restricted to showing what service workers are installed, as well as the ability to manually unregister any active service workers for the current page. It's just as helpful, but it does require more manual effort in the local development cycle.

When developing locally with an active service worker without the need for the functionality that update on refresh or bypass for network provides, it's also useful to hold Shift and press the refresh button.

Tip: A keyboard-only variation of this involves pressing Shift, Cmd, and R on macOS machines, and Shift, Ctrl, and R on Windows or other machines.

This functionality is great if there is uncertainty around whether a particular caching strategy is working as intended, and it's useful to grab everything from the network to compare behaviors with and without a service worker. Better yet, it's a specified behavior, so all browsers that support service workers will observe it.

It's hard to tell if a caching strategy is working as intended if the cache can't be inspected. Sure, the cache could be inspected in code, but that's a process involving debuggers and/or console statements when a visual tool would be better suited for the task. The Application panel in Chrome DevTools offers a subpanel to inspect the contents of Cache instances. 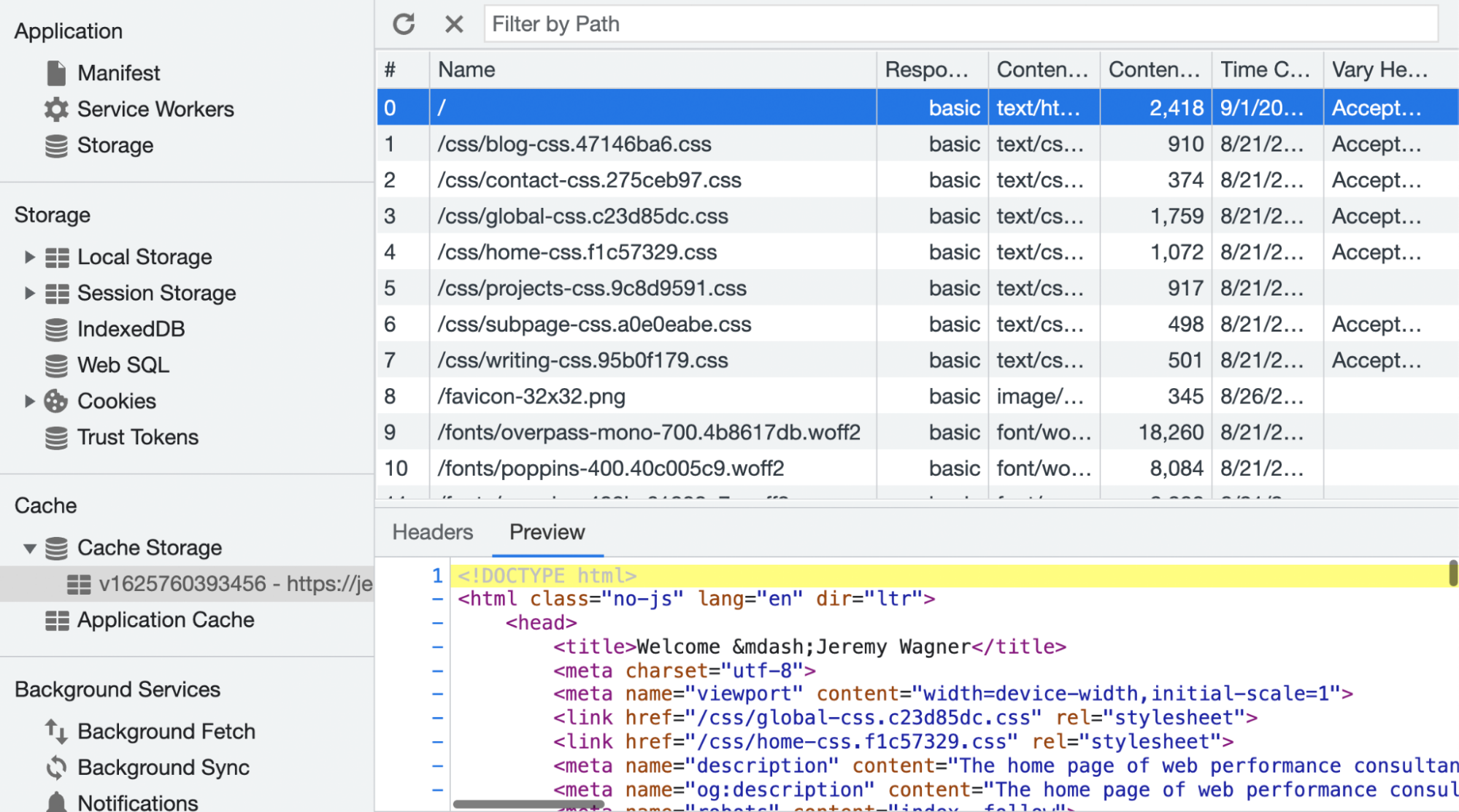 This subpanel makes service worker development easier by offering functionality such as:

This graphical user interface makes it easier to inspect service worker caches to see if items were added, updated, or removed altogether from a service worker cache. Firefox offers its own cache viewer with similar functionality, although it lives in a separate Storage panel.

In websites with lots of large static assets (such as high-resolution images), it's possible to hit storage quotas. When this happens, the browser will evict items from the cache that it deems stale, or otherwise worthy to sacrifice to make room for new assets.

Dealing with storage quotas should be a part of service worker development, and Workbox makes that process simpler than managing it yourself. With or without Workbox, though, simulating a custom storage quota to test cache management logic might be a good idea.

The Application panel in Chrome's DevTools has a Storage subpanel that offers information on how much of the current storage quota is being used by the page. It also allows for a custom quota to be specified in megabytes. When in effect, Chrome will enforce the custom storage quota so it can be tested.

Incidentally, this subpanel also contains a Clear site data button and a whole array of associated checkboxes for what should be cleared when the button is clicked. Among these items are any open Cache instances, and the ability to unregister any active service workers controlling the page.

When developers are unencumbered, they can work more confidently and be more productive. Local development with a service worker can be nuanced, but it doesn't have to be painful. With these tips and tricks, developing with an active service worker should be much more transparent and predictable, leading to a better developer experience.