Securely embed content onto a page without sharing cross-site data.

This document outlines a proposal for a new HTML element: <fencedframe>.

# Why do we need fenced frames?

Similarly, any first-party data in the embedding context cannot be shared with the fenced frame.

While browsing the web, you've probably looked at products on one site, and then you've seen them appear again in an ad on a completely different site.

Today, this advertising technique is achieved primarily through tracking technology that uses third-party cookies to share information across sites. This is technology which Chrome has committed to phase out and replace with more privacy-preserving variants. 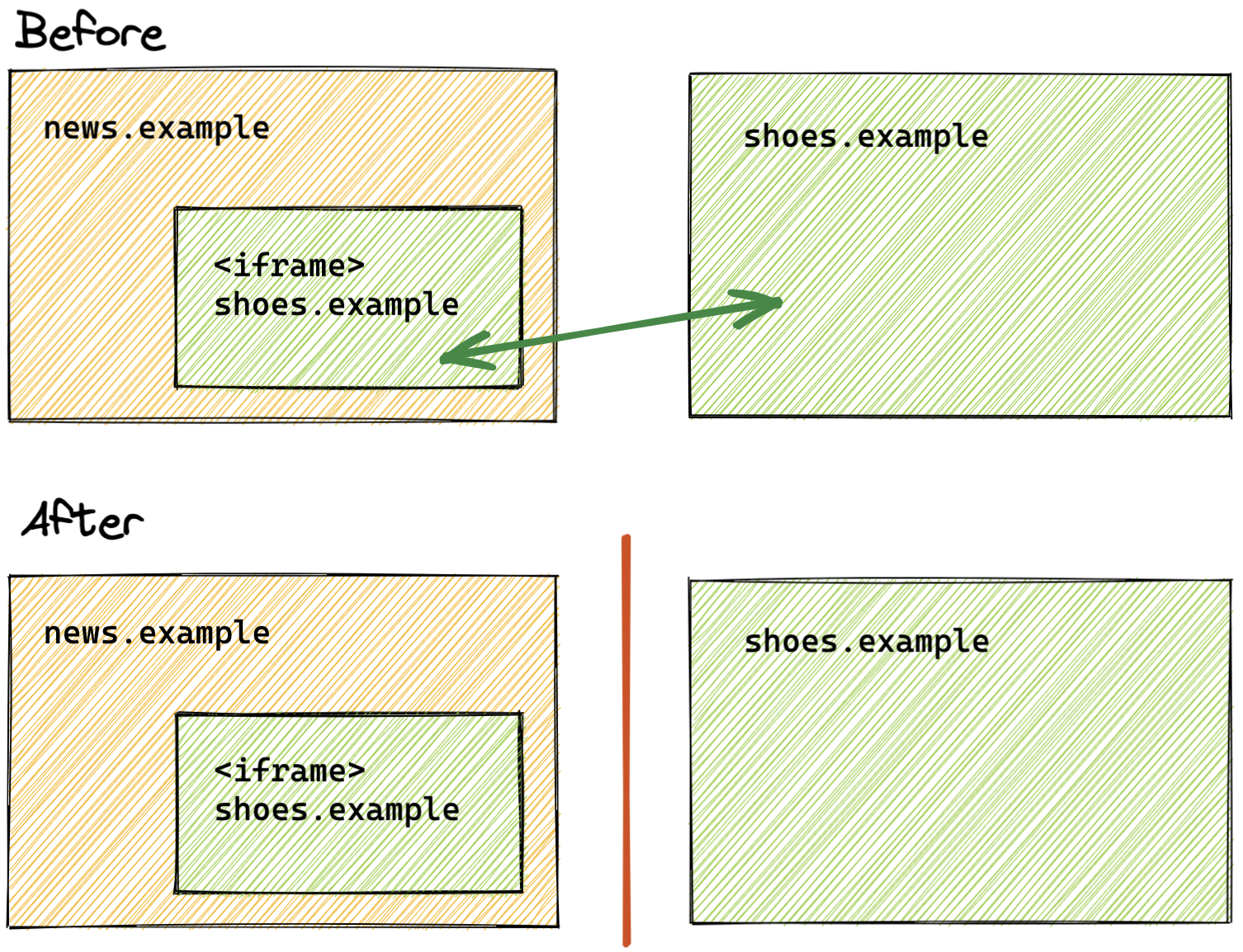 Storage partitioning will be applied to standard storage APIs including LocalStorage, IndexedDB, and cookies. In a partitioned world, information leakage across first-party storage will be significantly reduced.

Let's consider how fenced frames could work with the FLEDGE proposal. With FLEDGE, a user's interests are registered on an advertiser's site in interest groups, along with ads that may be of interest to the user. Then, on a separate site (known as a "publisher"), the ads registered in relevant interest groups are auctioned and the winning ad is displayed in a fenced frame.

If the publisher displays the winning ad in an iframe and the script can read the iframe's src attribute, the publisher can infer information about the visitor's interests from that ad's URL. This is not privacy-preserving.

With a fenced frame, the publisher could display an ad which matches visitor interests, but the src and interest group will be known only to the advertiser in the frame. The publisher could not access this information.

# How do fenced frames work?

A fenced frame will be created from the winner of the FLEDGE API ad auction. The information retrieved from FLEDGE API isn't the URL of the ads itself, but will be an opaque source.

Opaque sources allow your site to display ads on a site without revealing the ad source URL to the site owner.

It's not enough to just be able to display ads. If the ad can postMessage to the publisher's site, like in an iframe, it may leak the content of the displayed ad. So unlike iframes, fenced frames don't allow usage of the postMessage to communicate with the top-level site.

Fenced frames behave like a top-level browsing context (such as a browser tab). Although a fenced frame in certain modes (such as opaque-ads) can contain cross-site data (such as a FLEDGE interest group), the frame cannot access unpartitioned storage or cookies. An opaque-ads fenced frame can access a unique, nonce-based cookie and storage partition.

The characteristics of fenced frames are further detailed in the explainer.

# How do fenced frames compare to iframes?

Now that you know what fenced frames will and won't do, it's useful to compare to existing iframe features.

Ultimately, fenced frames won't replace iframes and you won't have to use them. Fenced frames are proposed for a more private frame for usage when data from different top-level partitions needs to be displayed on the same page.

Fenced frames will work in combination with other Privacy Sandbox proposals to display documents from different storage partitions within a single page. Potential APIs are currently in discussion.

Current candidates for this combination include:

For more details, refer to the Fenced Frames explainer.

Embedded content inside the <fencedframe> will be described by the src attribute.

Browsers will set Sec-Fetch-Dest: fencedframe for requests made from fenced frames and iframes that are embedded within a fenced frame.

The server must set the Supports-Loading-Mode: fenced-frame response header for a document to be loaded in a fenced frame. The header must be present for any iframes inside of a fenced frame, as well.

Use Chrome flags to enable the Fenced Frame API at chrome://flags/#enable-fenced-frames.

There are multiple choices in the dialog. We strongly recommend you select Enable, which allows Chrome to automatically update to new architecture as it becomes available.

To determine if fenced frames are defined:

The <fencedframe> element is still in experimental mode, so it is currently supported from Chrome 97 onwards. At this time, it's not supported by other browsers.

The Fenced Frame proposal is under active discussion and subject to change in the future. If you try this API and have feedback, we'd love to hear it.