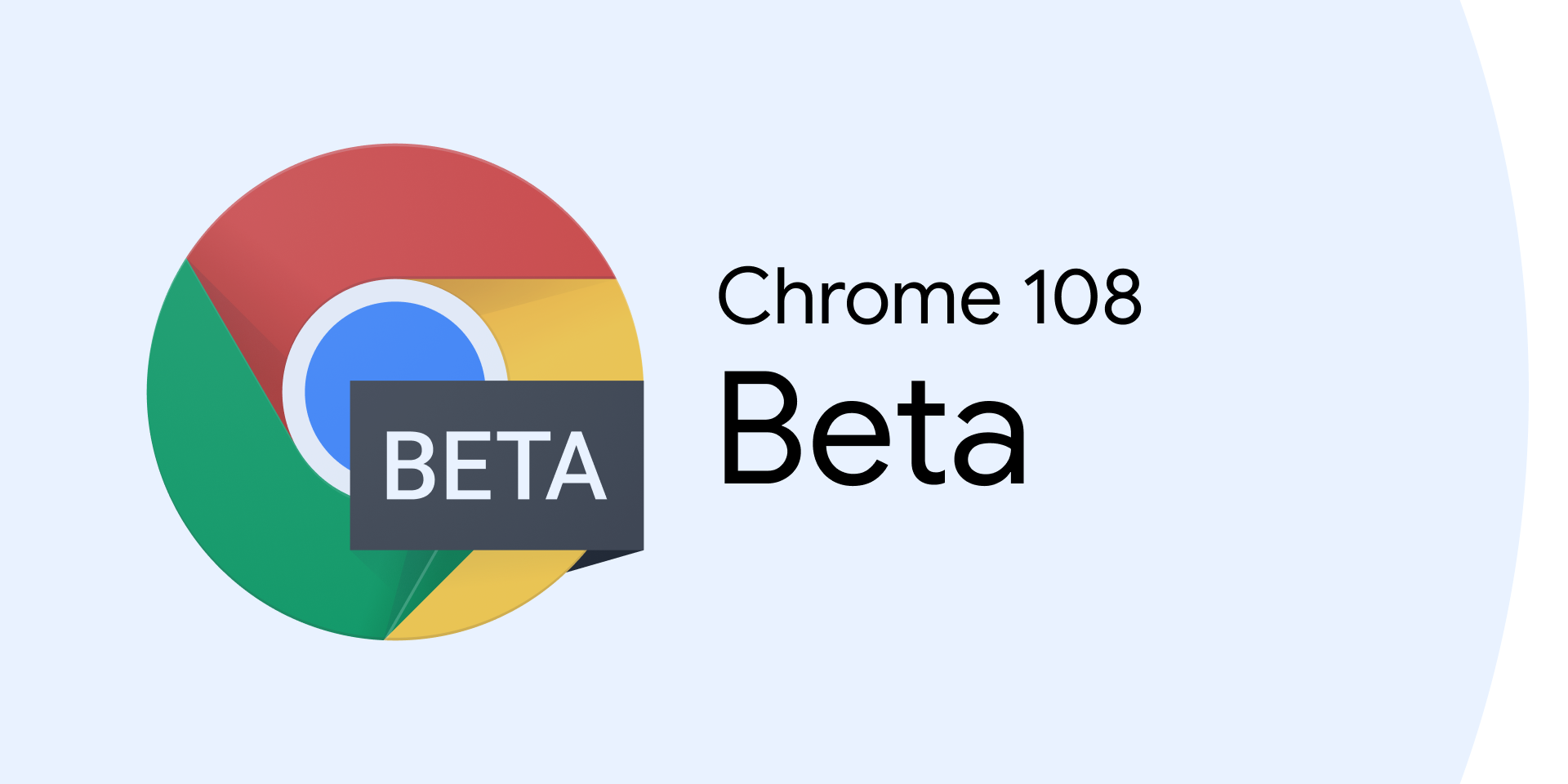 Unless otherwise noted, changes described below apply to the newest Chrome beta channel release for Android, ChromeOS, Linux, macOS, and Windows. Learn more about the features listed here through the provided links or from the list on ChromeStatus.com. Chrome 108 is beta as of October 27, 2022. You can download the latest on Google.com for desktop or on Google Play Store on Android.

Chrome will start to roll out a change that allows developers to use the existing overflow property with replaced elements that paint outside the content-box. Paired with object-view-box this can be used to create an image with a custom glow or shadow applied, with proper ink-overflow behavior like a CSS shadow would have.

This is a potential breaking change, find out more in A change to overflow on replaced elements.

Support for the avoid value of the CSS fragmentation properties break-before, break-after, and break-inside when printing. This value tells the browser to avoid breaking before, after or inside the element it is applied to. For example, the following CSS avoids a figure being broken at a page break.

This feature has been added due to Chrome 108 adding support for LayoutNG printing.

This feature allows developers to align items within either flex or grid layout by their last baseline, instead of their first. This is done via the following properties:

An event that fires on an element with content-visibility: auto when the rendering state of the element changes due to any of the attributes that make the element relevant to the user.

The Federated Credential Management API allows users to bring their federated identity to login to websites in a manner compatible with improvements to browser privacy.

Enables Media Source Extensions (MSE) API usage from DedicatedWorker contexts to enable improved performance of buffering media for playback by an HTMLMediaElement on the main Window context. By creating a MediaSource object on a DedicatedWorker context, an application may then obtain a MediaSourceHandle from it and transfer that handle to the main thread for use in attaching to an HTMLMediaElement. The context that created the MediaSource object may then use it to buffer media.

The Permissions Policy specification defines a mechanism that allows developers to selectively enable and disable use of various browser features and APIs. One capability of this mechanism allows features to be enabled only on explicitly enumerated origins (for example, https://foo.com/). This mechanism is not flexible enough for the design of some CDNs, which deliver content via an origin that might be hosted on one of several hundred possible subdomains.

Therefore, this feature adds support for wildcards in permissions policy structured like SCHEME://*.HOST:PORT (for example, https://*.foo.com/) where a valid Origin could be constructed from SCHEME://HOST:PORT (for example, https://foo.com/). This requires that HOST is a registrable domain. This means that https://*.bar.foo.com/ works but https://*.com/ won’t (if you want to allow all domains to use the feature, you should just delegate to *).

Updates the asynchronous methods flush(), getSize(), and truncate() in FileSystemSyncAccessHandle in the File System Access API to synchronous methods. FileSystemSyncAccessHandle currently has a mix of sync and async methods, hindering the performance and the usability, especially for applications porting C/C++ to Wasm. This update will bring consistency in the API usage and improve the performance for Wasm-based libraries.

Conditional UI for WebAuthn is supported on Windows 22H2 or later, macOS, and Android P or later. The WebAuthn UI on desktop platforms has also been refreshed.

COLRv1 color vector fonts have been supported since Chrome 98, but this initial release supported only static functionality of the COLRv1 table. The COLRv1 specification defines integration with OpenType Variations which allows modifying font properties of gradients and transforms by means of changing variable axis parameters. This second step brings support for such variations to COLRv1.

Using font-tech() and font-format() together with CSS @supports allows detection of font technology and format support, and progressive enhancement of content. The following example tests for support of COLRv1 fonts.

CSS Fonts Level 4 provides additional means of selecting or filtering font resources. The tech() function was introduced, which allows passing in a list of font technologies that this respective font blob requires to function. Based on that, the User Agent will select the first suitable resource.

The Android On-Screen Keyboard resizes the visual viewport by default rather than the initial containing block. Authors can opt out of this using the new interactive-widget meta-viewport key.

This release of Chrome has two new origin trials.

The canmakepayment service worker event lets the merchant know whether the user has a card on file in an installed payment app. It silently passes the merchant's origin and arbitrary data to a service worker from payment app origin. This cross-origin communication happens on PaymentRequest construction in JavaScript, does not require a user gesture, and does not show any user interface. The developer trial for removing the identity fields from "canmakepayment" event can be enabled via: chrome://flags/#clear-identity-in-can-make-payment. Enabling this flag will empty-out the identity fields in the "canmakepayment" event (and the Android IS_READY_TO_PAY Intent).

Find out more in Update to the CanMakePayment event behavior of the Payment Handler API.

The NotRestoredReason API will report the list of reasons why a page is not served from BFcache in a frame tree structure, via the PerformanceNavigationTiming API.

Pages can be blocked from BFcache for different reasons, such as reasons required by the specification, and reasons specific to the browser implementation. Developers can gather the hit-rate of BFCache on their site by using the pageshow handler persisted parameter and PerformanceNavigationTiming.type(back-forward). This API makes it possible for sites to collect information on why BFCache is not used on a history navigation, so that they can take actions on each reason and make their page BFCache compatible.

This release of Chrome deprecates one feature.

These are non-standard APIs that aren't implemented by all browsers and have no effect on browser behavior. This cleans them up, and removes a potential fingerprinting signal.

They were originally used to modify/control the "status bar" text at the bottom of browser windows. However, they have never had any actual effect on Chrome's status bar, and they are not standardized attributes. Gecko has not supported these attributes since version 23; WebKit still supports these attributes. The related window.status attribute is standardized, but also must never have an impact on the window status bar.

The feature has no observable effects in primary use cases, but may constrain implementations in suboptimal ways. See this issue for a more detailed description. Per consensus of WebCodecs spec editors and lack of usage (0.000000339% - 0.00000687% of page loads per use counter in M106).

restoreScroll() is being replaced by navigateEvent.scroll(). scroll() works identically except that it allows the developer to control scroll timing for non-traverse navigations (scroll() works when the scroll is not a restore, hence the name change along with the behavior change).

transitionWhile() is being replaced by navigateEvent.intercept() due to design flaws reported by developers. intercept() behaves nearly identically to transitionWhile(), but instead of taking a mandatory Promise parameter, it takes an optional handler function that returns a Promise. This allows the browser to control when the handler executes, which is later and more intuitive than for transitionWhile().

"googIPv6: false" can be used to disable IPv6 support in WebRTC, as in the following example.

IPv6 has been enabled by default for many years and we should not be able to disable it. This is a legacy API that does not exist in the spec.