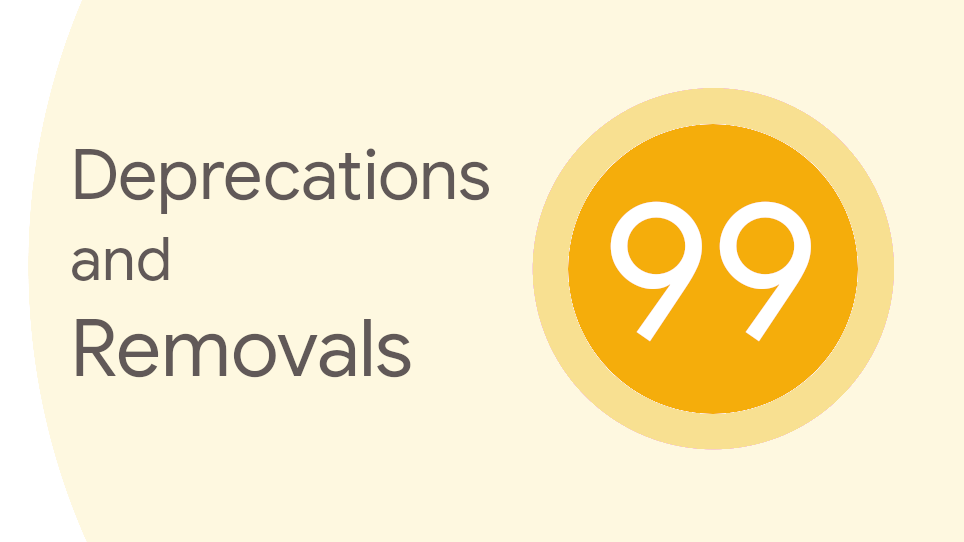 Deprecations and removals in Chrome 99

Chrome 99 beta was released on February 3, 2022 and is expected to become the stable version in early March, 2022.

Battery Status API is no longer supported on insecure origins, such as HTTP pages or HTTPS iframes embedded in HTTP pages. The Battery Status API allows web developers to access, among other things, a system's battery charging level and whether it is being charged. It is a powerful feature that has been around for over a decade and, as such, was originally designed with different security constraints.

This version of Chrome removes support for the font-family value "-webkit-standard". This value is merely an alias for the proprietary keyword "-webkit-body" and is only exposed because it's inherited from WebKit. Removing this improves alignment with the CSS specifications and with Firefox.

The navigator.getGamepads() method now returns an array of Gamepad objects instead of a GamepadList. GamepadList is no longer supported in Chrome. This brings Chrome in line with specification and with Gecko and Webkit. For information on Gamepads generally, see Play the Chrome dino game with your gamepad.

# Update WebCodecs to match the specification

Chrome has removed two items because of recent changes in the WebCodecs specification.

The specification requires that the VideoFrame() constructor include a timestamp argument (VideoFrameInit.timestamp) for CanvasImageSource types that don't implicitly have a timestamp (for example, HTMLCanvasElement). Failing to include the timestamp should result in a TypeError, but Chrome previously defaulted the timestamp to zero. This seems helpful, but is problematic if you then send the VideoFrame to a VideoEncoder, where timestamps are used to guide bitrate control.