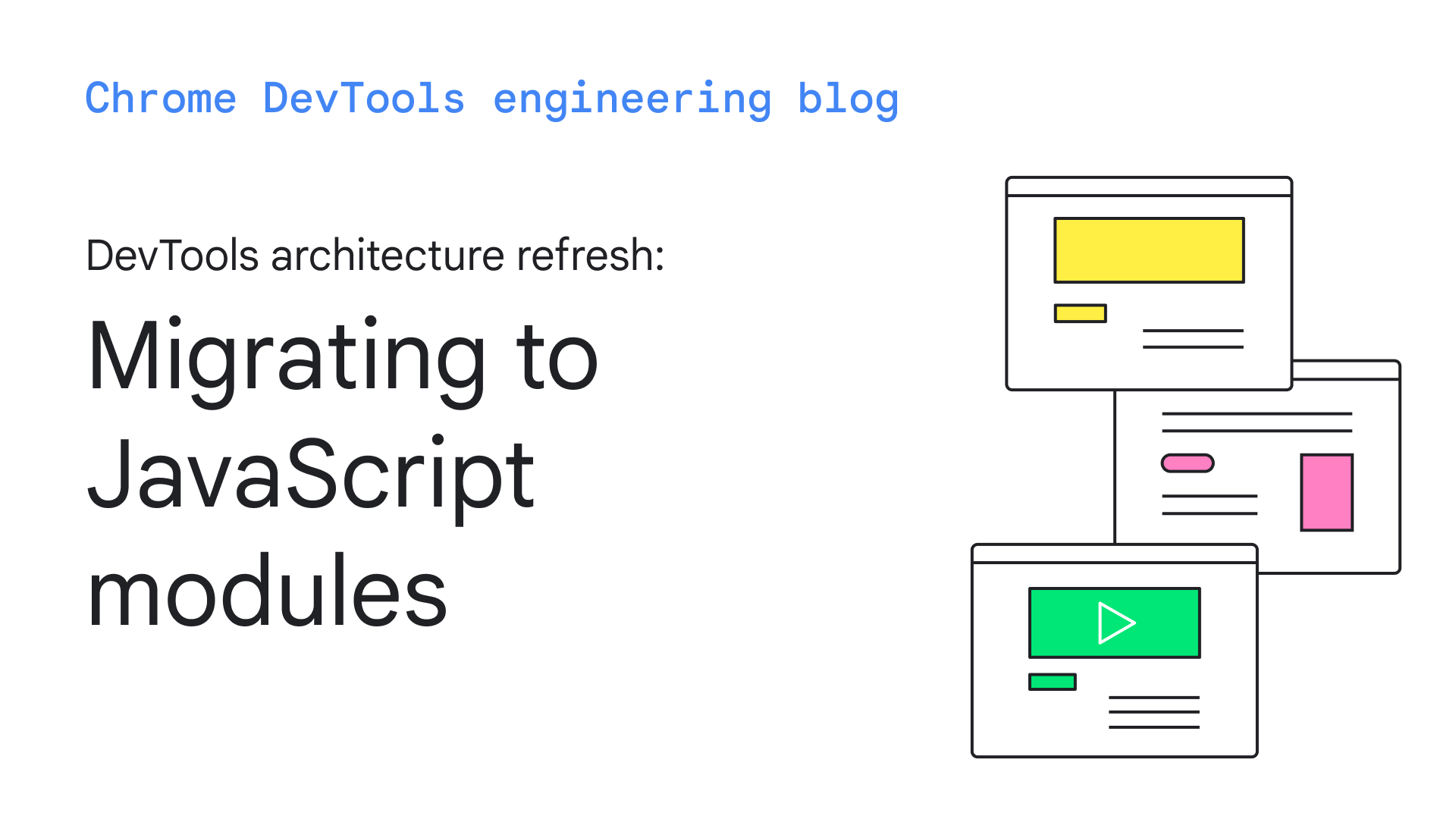 This post is part of a series of blog posts describing the changes we are making to DevTools' architecture and how it is built. We will explain how DevTools has historically worked, what the benefits and limitations were and what we have done to alleviate these limitations. Therefore, let's dive deep into module systems, how to load code and how we ended up using JavaScript modules.

# In the beginning, there was nothing

While the current frontend landscape has a variety of module systems with tools built around them, as well as the now-standardized JavaScript modules format, none of these existed when DevTools was first built. DevTools is built on top of code that initially shipped in WebKit more than 12 years ago.

The first mention of a module system in DevTools stems from 2012: the introduction of a list of modules with an associated list of sources. This was part of the Python infrastructure used back then to compile and build DevTools. A follow-up change extracted all modules into a separate frontend_modules.json file (commit) in 2013 and then into separate module.json files (commit) in 2014.

Since 2014, the module.json pattern has been used in DevTools to specify its modules and source files. Meanwhile, the web ecosystem rapidly evolved and multiple module formats were created, including UMD, CommonJS and the eventually standardized JavaScript modules. However, DevTools stuck with the module.json format.

While DevTools remained working, there were a couple of downsides of using a non-standardized and unique module system:

All in all, when evaluating the current state of the module system in DevTools and the other (more widely used) module formats, we concluded that the module.json pattern was creating more problems than it solved and it was time to plan our move away from it.

# The benefits of standards

The primary benefit of JavaScript modules is that it is the standardized module format for JavaScript. When we listed the downsides of the module.json (see above), we realized that almost all of them were related to using a non-standardized and unique module format.

Choosing a module format that is non-standardized means that we have to invest time ourselves into building integrations with the build tools and tools our maintainers used.

These integrations often were brittle and lacked support for features, requiring additional maintenance time, sometimes leading to subtle bugs that would eventually ship to users.

Since JavaScript modules were the standard, it meant that IDEs like VS Code, type checkers like Closure Compiler/TypeScript and build tools like Rollup/minifiers would be able to understand the source code we wrote. Moreover, when a new maintainer would join the DevTools team, they would not have to spend time learning a proprietary module.json format, whereas they would (likely) already be familiar with JavaScript modules.

Of course, when DevTools was initially built, none of the above benefits existed. It took years of work in standards groups, runtime implementations and developers using JavaScript modules providing feedback to get to the point where they are now. But when JavaScript modules became available we had a choice to make: either keep maintaining our own format, or invest in migrating to the new one.

# The cost of the shiny new

Even though JavaScript modules had plenty of benefits that we would like to use, we remained in the non-standard module.json world. Reaping the benefits of JavaScript modules meant that we had to significantly invest in cleaning up technical debt, performing a migration that could potentially break features and introduce regression bugs.

That last point turned out to be very important. Even though we could in theory get to JavaScript modules, during a migration we would end up with code that would have to take into account both module.json and JavaScript modules. Not only was this technically difficult to achieve, it also meant that all engineers working on DevTools would need to know how to work in this environment. They would have to continuously ask themselves "For this part of the codebase, is it module.json or JavaScript modules and how do I make changes?".

Sneak peek: The hidden cost of guiding our fellow maintainers through a migration was bigger than we anticipated.

After the cost analysis, we concluded that it was still worthwhile to migrate to JavaScript modules. Therefore, our main goals were the following:

While the goal was clear, the limitations imposed by the module.json format proved to be difficult to workaround. It took several iterations, prototypes and architectural changes before we developed a solution we were comfortable with. We wrote a design doc with the migration strategy we ended up. The design doc also listed our initial time estimation: 2-4 weeks.

Spoiler alert: the most intensive part of the migration took 4 months and from start to finish took 7 months!

Additionally, we would perform the migration in 2 phases (we eventually split up the last phase into 2 sub-phases, see below): the export- and import-phases. The status of which module would be in which phase was tracked in a large spreadsheet:

A snippet of the progress sheet is publicly available here.

The first phase would be to add export-statements for all symbols that were supposed to be shared between modules/files. The transformation would be automated, by running a script per folder. Given the following symbol would exist in the module.json world:

This would be transformed to the following:

Initially, our plan was to rewrite same-file imports during this phase as well. For example, in the above example we would rewrite Module.File1.localFunctionInFile to localFunctionInFile. However, we realized that it would be easier to automate and safer to apply if we separated these two transformations. Therefore, the "migrate all symbols in the same file" would become the second sub-phase of the import-phase.

Since adding the export keyword in a file transforms the file from a "script" to a "module", a lot of the DevTools infrastructure had to be updated accordingly. This included the runtime (with dynamic import), but also tools like ESLint to run in module mode.

One discovery we made while working through these issues is that our tests were running in "sloppy" mode. Since JavaScript modules imply that files run in "use strict" mode, this would also affect our tests. As it turned out, a non-trivial amount of tests were relying on this sloppiness, including a test that used a with-statement 😱.

In the end, updating the very first folder to include export-statements took about a week and multiple attempts with relands.

After all symbols are both exported using export-statements and remained on the global scope (legacy), we had to update all references to cross-file symbols to use ES imports. The end goal would be to remove all "legacy export objects", cleaning up the global scope. The transformation would be automated, by running a script per folder.

For example, for the following symbols that exist in the module.json world:

They would be transformed to:

However, there were some caveats with this approach:

In February 2020, 6 months after the start in September 2019, the last cleanups were performed in the ui/ folder. This marked the unofficial end to the migration. After letting the dust settle down, we officially marked the migration as finished on March 5th 2020. 🎉

Now, all modules in DevTools use JavaScript modules to share code. We still put some symbols on the global scope (in the module-legacy.js files) for our legacy tests or to integrate with other parts of the DevTools architecture. These will be removed over time, but we don't consider them a blocker for future development. We also have a style guide for our usage of JavaScript modules.

Conservative estimates for the number of CLs (abbreviation for changelist - the term used in Gerrit that represents a change - similar to a GitHub pull request) involved in this migration are around 250 CLs, largely performed by 2 engineers. We don't have definitive statistics on the size of changes made, but a conservative estimate of lines changed (calculated as the sum of absolute difference between insertions and deletions for each CL) is roughly 30,000 (~20% of all of DevTools frontend code).

We are aware of one regression that shipped to Chrome stable and that was introduced as part of this migration. The auto-completion of snippets in the command menu broke due to an extraneous default export. We have had several other regressions, but our automated test suites and Chrome Canary users reported these and we fixed them before they were able to reach Chrome stable users.

You can see the full journey (not all CLs are attached to this bug, but most of them are) logged on crbug.com/1006759.