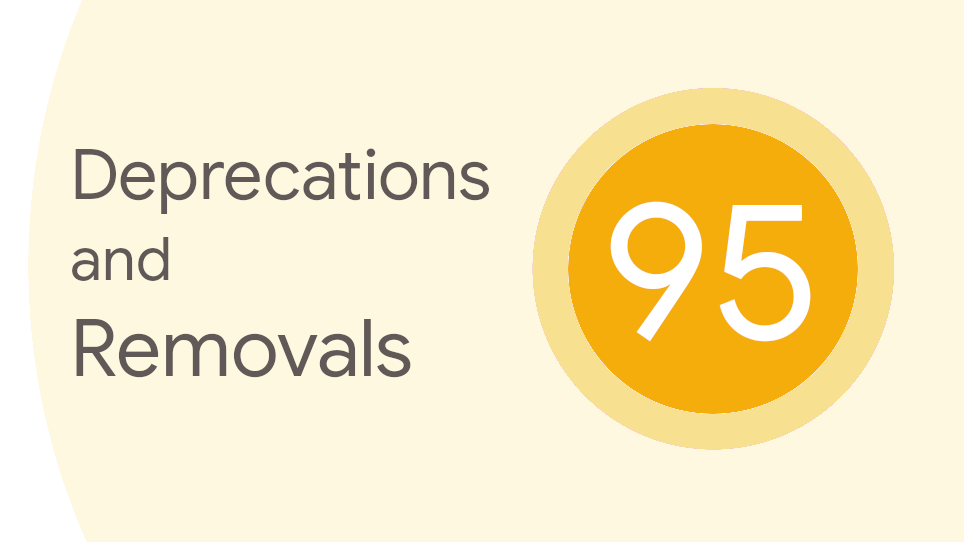 Deprecations and removals in Chrome 95

Chrome 95 beta was released on September 23, 2021 and is expected to become the stable version in late October, 2021.

Chrome is removing support for FTP URLs. Use of FTP in the browser is sufficiently low that it is no longer viable to invest in improving the existing FTP client. In addition, more capable FTP clients are available on all affected platforms.

Google Chrome 72 and later removed support for fetching document subresources over FTP and rendering of top level FTP resources. Currently navigating to FTP URLs results in showing a directory listing or a download depending on the type of resource. A bug in Google Chrome 74 and later resulted in dropping support for accessing FTP URLs over HTTP proxies. Proxy support for FTP was removed entirely in Google Chrome 76. In Chrome 86 FTP support was turned off for pre-release channels (Canary and Beta) and experimentally turned off for one percent of stable users, though it could be reenabled via the command line. In Chrome 87 it was turned off for fifty percent of users but could also be enabled through the command line. Since Chrome 88, it was only available through a deprecation trial and is now disabled.

# Support for URLs with non-IPv4 hostnames ending in numbers

Chrome's legacy U2F API for interacting with security keys is deprecated. It will be disabled by default in Chrome 98.

U2F is Chrome's original security key API. It allows sites to register public key credentials on USB security keys and challenge them for building phishing-resistant two-factor authentication systems. U2F never became an open web standard and was subsumed by the Web Authentication API (launched in Chrome 67). Chrome never directly supported the FIDO U2F JavaScript API, but rather shipped a component extension called cryptotoken, which exposes an equivalent chrome.runtime.sendMessage() method. U2F and Cryptotoken are firmly in maintenance mode and we have encouraged sites to migrate to the Web Authentication API for the last two years.

The following timeline is currently planned for deprecation and removal:

Beta as of September 23, 2021. The following changes were implemented:

Beta expected in late October 2021, stable in November. The following changes were implemented:

The permission prompt can be suppressed by enrolling in the U2FSecurityKeyAPI deprecation trial or enabling the U2fSecurityKeyApiEnabled enterprise policy.

Beta expected in early January 2022, stable in February. The U2F API will be disabled by default. Only sites enrolled in the deprecation trial or enterprises that turned on the U2fSecurityKeyApiEnabled policy will be able to use U2F at this point.

Beta expected in late June 2022, stable in early August. The U2F API will be fully removed.