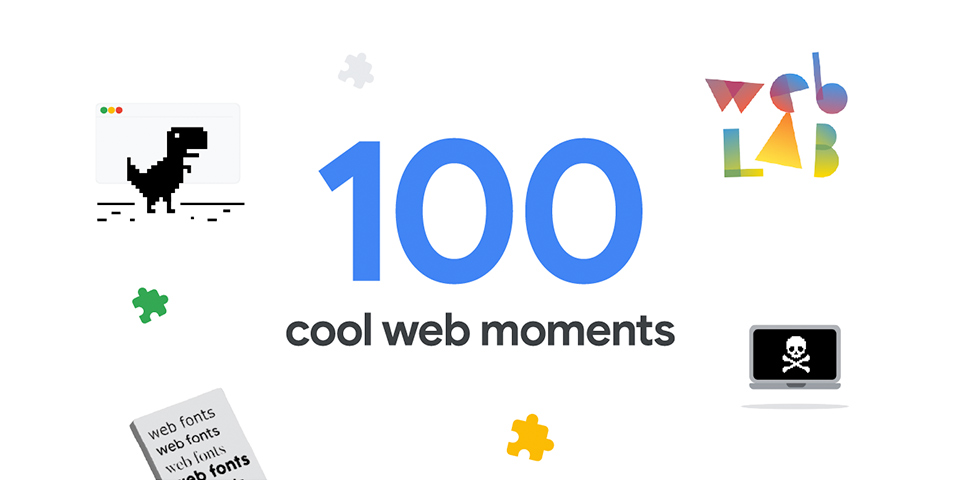 Google Chrome launched in 2008, and in March 2022 we are celebrating the launch of Chrome version 100 with a scroll down memory lane. #100CoolWebMoments remembers some cool, fun, interesting, and important things that have happened in the past 14 years.

A lot has happened on the web since 2008. If you read Ethan Marcotte’s 2010 A List Apart article on responsive web design on the day of publication you might have done so with Chrome 4. By the time Media Queries became a W3C Recommendation in 2012, Chrome 19 was available.

Chrome was at version 43 when Alex Russell and Frances Berriman introduced Progressive Web Apps in 2015, with Microsoft announcing Edge as the new browser to replace Internet Explorer in the same year.

In March 2017, version 57 brought us CSS Grid, the layout method was shipped in Chrome, Firefox, and Safari within days of each other. This shared release of a major feature happened again more recently, with Cascade Layers landing in Chrome 99, along with Firefox 97, and Safari 15.4.

Tell us which moments you loved the most. If we've missed anything (and we're sure we have), tweet us @ChromiumDev with #100CoolWebMoments.