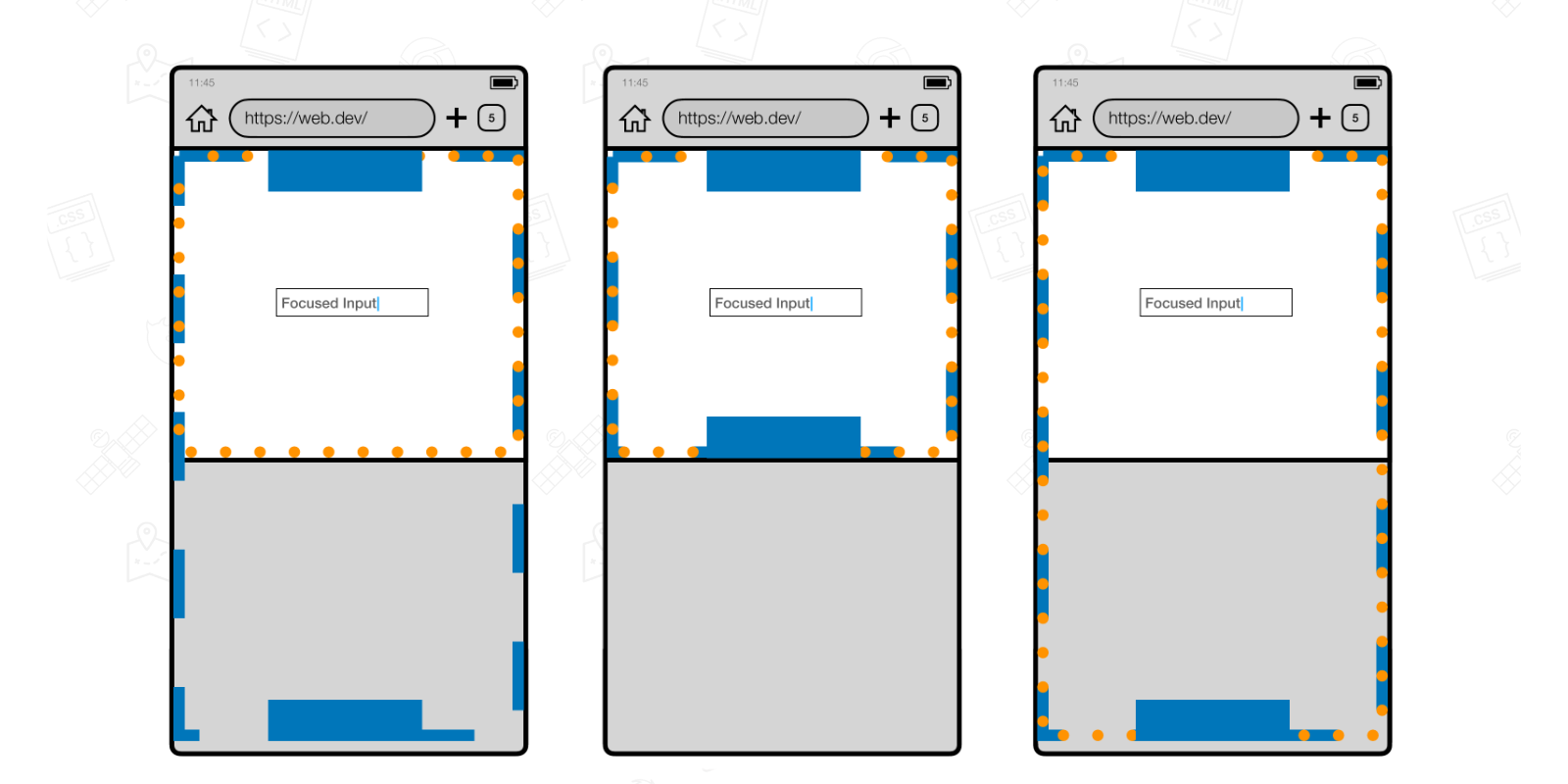 Here's some background on what's happening, why Chrome is making this change, and what you can do to prepare.

# The Layout Viewport and the Visual Viewport

When pinch-zooming in, you shrink the size of the Visual Viewport in relation to the Layout Viewport.

In this episode of HTTP 203, Bramus tells you all about the various viewports and related terminologies.

When focussing an input or any other editable area, devices–mostly touchscreen devices–can show an on-screen keyboard. This keyboard, often referred to as a virtual keyboard,allows users to enter content into the editable area.

When doing so, browsers respond in one of the following ways in relation to the various viewports:

These three behaviors are visualized as follows:

Depending on which browser and OS combination a visitor uses, one of the behaviors is used, beyond your control.

In the Viewport Investigation Effort-part of Interop 2022-various viewport-related aspects were investigated, for every major browser and OS combination.

One of the tested aspects is the resize behavior when the OSK is shown. This led to the following classification:

Browsers that resize both the Visual Viewport and Layout Viewport.

Browsers that resize none of the viewports:

# Side-effects of each behavior

This difference in how the various viewports get resized when the OSK is shown leads to a non-interoperable layout and sizing behavior of websites.

In the browsers from group 1, with the OSK shown:

In the browsers from group 2, with the OSK shown:

Unless you resort to User-Agent sniffing or rely on extensive scripting, you cannot know which behavior is used. You also cannot change the behavior, as it is determined by the browser and OS combination the user is visiting from.

# Changing the default behavior in Chrome 108

As of Chrome 108, Chrome on Android will adjust its viewport resize behavior to no longer resize the Layout Viewport when the on-screen keyboard is shown.

Thanks to this change, authors can know which behavior will be used, no matter which OS Chrome is running on. Furthermore it allows for stable viewport-relative units: showing or hiding the OSK does not affect these units.

These changes do not affect WebView

# Opting in to a different behavior

If you want your website to use the pre-108 resize behavior, fear not. Also shipping in Chrome 108 is an extension to the viewport meta tag.

Through the interactive-widget key, you can tell Chrome which resize behavior you want.

Accepted values for interactive-widget are:

To opt back in to the “old” Chrome on Android behavior, set the viewport meta tag to this:

If you don’t include interactive-widget in the viewport meta tag, Chrome will use the default behavior, which is resizes-visual.

Visualized, the settings have this effect on the various viewports:

You can try out the effect of each value in your browser on this demo website.

Note that this meta tag extension is only supported by Chrome 108 and up at the time of writing. Support excludes Chrome on iOS and iPadOS, as these versions are powered by Apple’s WebKit instead of Chrome’s Blink rendering engine.

However, we do encourage website authors to actively test their websites in Chrome 108, which is in beta from October 27th 2022. Specifically look out for elements that use position: fixed and/or rely on Viewport-relative units.

Feedback can be reported over at crbug.com. Be sure to include “on-screen keyboard” in the report’s title.