Use the Idle Detection API to find out when the user isn't actively using their device.

# What is the Idle Detection API?

The Idle Detection API notifies developers when a user is idle, indicating such things as lack of interaction with the keyboard, mouse, screen, activation of a screensaver, locking of the screen, or moving to a different screen. A developer-defined threshold triggers the notification.

# Suggested use cases for the Idle Detection API

Examples of sites that may use this API include:

# How to use the Idle Detection API

To check if the Idle Detection API is supported, use:

The Idle Detection API assumes that there is some level of engagement between the user, the user agent (that is, the browser), and the operating system of the device in use. This is represented in two dimensions:

Distinguishing active from idle requires heuristics that may differ across user, user agent, and operating system. It should also be a reasonably coarse threshold (see Security and Permissions).

The model intentionally does not formally distinguish between interaction with particular content (that is, the webpage in a tab using the API), the user agent as a whole, or the operating system; this definition is left to the user agent.

The first step when using the Idle Detection API is to ensure the 'idle-detection' permission is granted. If the permission is not granted, you need to request it via IdleDetector.requestPermission(). Note that calling this method requires a user gesture.

The second step is then to instantiate the IdleDetector. The minimum threshold is 60,000 milliseconds (1 minute). You can finally start the idle detection by calling the IdleDetector's start() method. It takes an object with the desired idle threshold in milliseconds and an optional signal with an AbortSignal to abort idle detection as parameters.

You can abort the idle detection by calling the AbortController's abort() method.

Starting in Chromium 94, you can emulate idle events in DevTools without actually being idle. In DevTools, open the Sensors tab and look for Emulate Idle Detector state. You can see the various options in the video below.

As of Puppeteer version 5.3.1, you can emulate the various idle states to programmatically test how your web app's behavior changes.

You can see the Idle Detection API in action with the Ephemeral Canvas demo that erases its contents after 60 seconds of inactivity. You could imagine this being deployed in a department store for kids to doodle on. 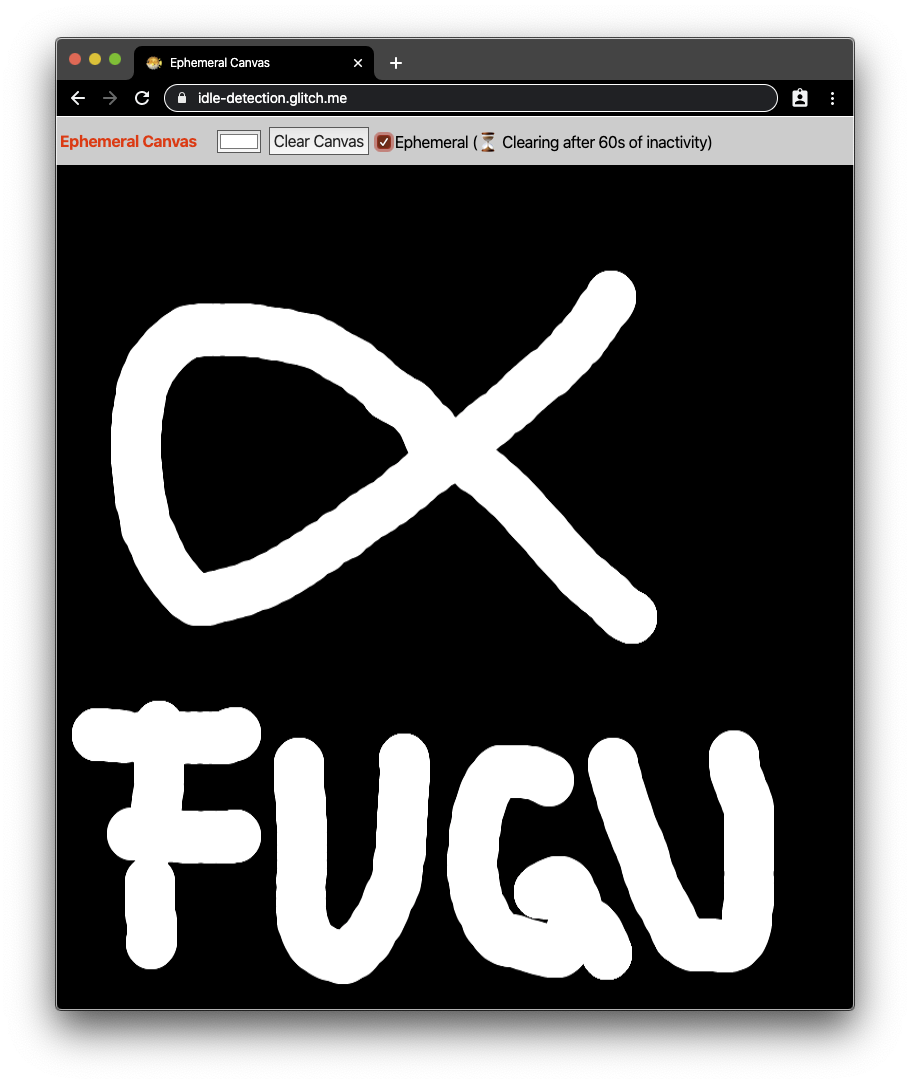 Some aspects of the Idle Detection API are polyfillable and idle detection libraries like idle.ts exist, but these approaches are constrained to a web app's own content area: The library running in the context of the web app needs to expensively poll for input events or listen to visibility changes. More restrictively, though, libraries cannot tell today when a user goes idle outside of its content area (e.g., when a user is on a different tab or logged out of their computer altogether).

The Chrome team has designed and implemented the Idle Detection API using the core principles defined in Controlling Access to Powerful Web Platform Features, including user control, transparency, and ergonomics. The ability to use this API is controlled by the 'idle-detection' permission. In order to use the API, an app also must be running in a top-level secure context.

We always want to prevent malicious actors from misusing new APIs. Seemingly independent websites, but that in fact are controlled by the same entity, might obtain user idle information and correlate the data to identify unique users across origins. To mitigate these sort of attacks, the Idle Detection API limits the granularity of the reported idle events.

The Chrome team wants to hear about your experiences with the Idle Detection API.

Is there something about the API that doesn't work like you expected? Or are there missing methods or properties that you need to implement your idea? Have a question or comment on the security model? File a spec issue on the corresponding GitHub repo, or add your thoughts to an existing issue.

Did you find a bug with Chrome's implementation? Or is the implementation different from the spec? File a bug at new.crbug.com. Be sure to include as much detail as you can, simple instructions for reproducing, and enter Blink>Input in the Components box. Glitch works great for sharing quick and easy repros.

Are you planning to use the Idle Detection API? Your public support helps the Chrome team to prioritize features and shows other browser vendors how critical it is to support them.

The Idle Detection API was implemented by Sam Goto. DevTools support was added by Maksim Sadym. Thanks to Joe Medley, Kayce Basques, and Reilly Grant for their reviews of this article. The hero image is by Fernando Hernandez on Unsplash.