# What is insertable streams for MediaStreamTrack?

The core idea behind insertable streams for MediaStreamTrack is to expose the content of a MediaStreamTrack as a collection of streams (as defined by the WHATWG Streams API). These streams can be manipulated to introduce new components.

Granting developers access to the video (or audio) stream directly allows them to apply modifications directly to the stream. In contrast, realizing the same video manipulation task with traditional methods requires developers to use intermediaries such as <canvas> elements. (For details of this type of process, see, for example, video + canvas = magic.)

Insertable streams for MediaStreamTrack is supported from Chrome 94.

Use cases for insertable streams for MediaStreamTrack include, but are not limited to:

# How to use insertable streams for MediaStreamTrack

You can feature-detect insertable streams for MediaStreamTrack support as follows.

A MediaStreamTrackGenerator object likewise exposes one property, writable, which is a WritableStream that allows writing media frames to the MediaStreamTrackGenerator, which is itself a MediaStreamTrack. If the kind attribute is "audio", the stream accepts AudioFrame objects and fails with any other type. If kind is "video", the stream accepts VideoFrame objects and fails with any other type. When a frame is written to writable, the frame's close() method is automatically invoked, so that its media resources are no longer accessible from JavaScript.

A MediaStreamTrackGenerator is a track for which a custom source can be implemented by writing media frames to its writable field.

# Bringing it all together

The core idea is to create a processing chain as follows:

The example below illustrates this chain for a barcode scanner application which highlights detected barcode in a live video stream.

This article barely scratches the surface of what is possible and going into the details is way beyond the scope of this publication. For more examples, see the extended video processing demo and the audio processing demo respectively. You can find the source code for both demos on GitHub.

You can see the QR code scanner demo from the section above in action on a desktop or mobile browser. Hold a QR code in front of the camera and the app will detect it and highlight it. You can see the application's source code on Glitch. 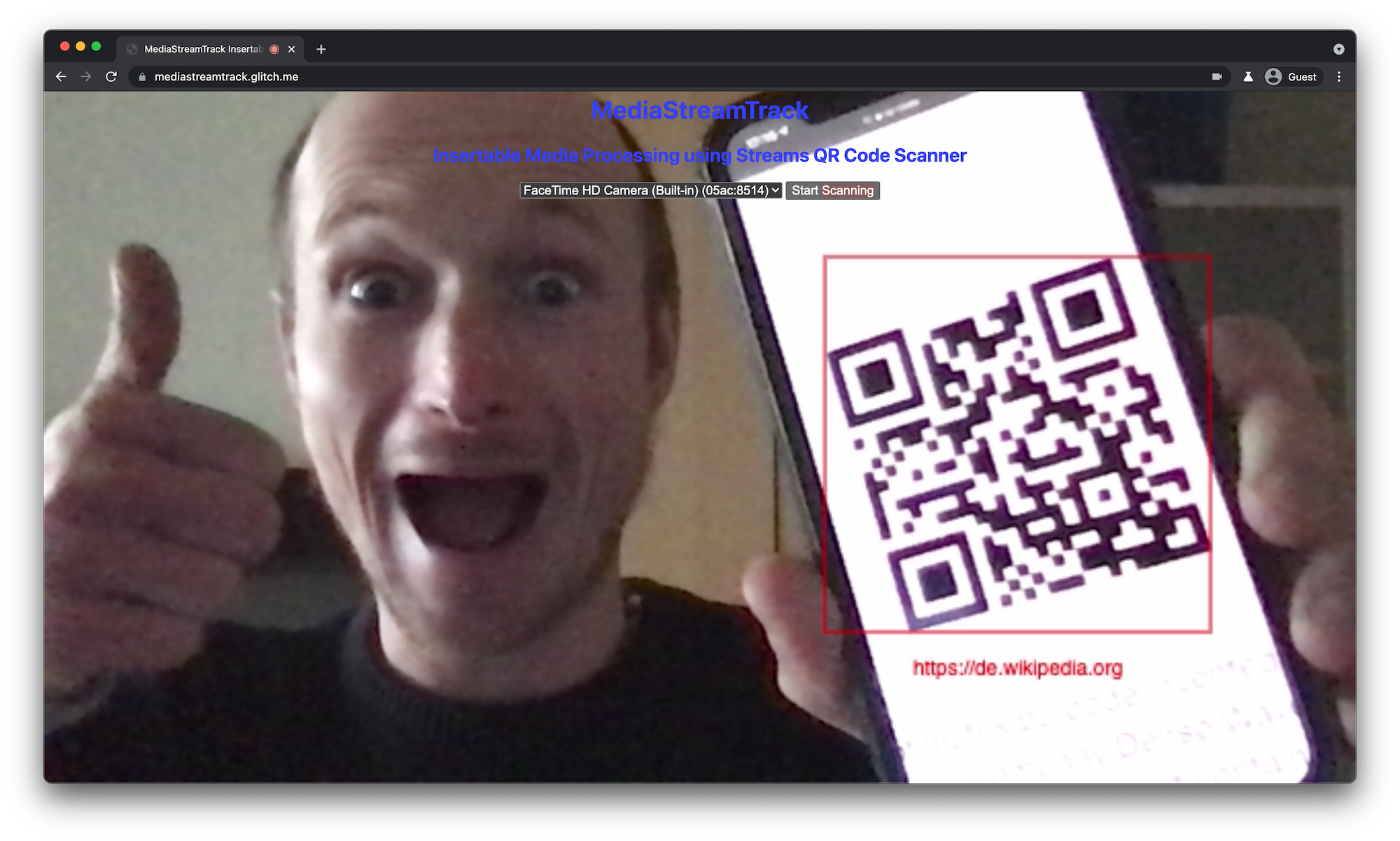 The security of this API relies on existing mechanisms in the web platform. As data is exposed using the VideoFrame and AudioFrame interfaces, the rules of those interfaces to deal with origin-tainted data apply. For example, data from cross-origin resources cannot be accessed due to existing restrictions on accessing such resources (e.g., it is not possible to access the pixels of a cross-origin image or video element). In addition, access to media data from cameras, microphones, or screens is subject to user authorization. The media data this API exposes is already available through other APIs.

The Chromium team wants to hear about your experiences with insertable streams for MediaStreamTrack.

Is there something about the API that does not work like you expected? Or are there missing methods or properties that you need to implement your idea? Do you have a question or comment on the security model? File a spec issue on the corresponding GitHub repo, or add your thoughts to an existing issue.

Did you find a bug with Chromium's implementation? Or is the implementation different from the spec? File a bug at new.crbug.com. Be sure to include as much detail as you can, simple instructions for reproducing, and enter Blink>MediaStream in the Components box. Glitch works great for sharing quick and easy repros.

Are you planning to use insertable streams for MediaStreamTrack? Your public support helps the Chromium team prioritize features and shows other browser vendors how critical it is to support them.

Send a tweet to @ChromiumDev using the hashtag #InsertableStreams and let us know where and how you are using it.