Overview of the RenderingNG architecture

This post is a part of a series on the Chromium rendering engine. Check out the rest of the series to learn more about RenderingNG, key data structures, VideoNG, and LayoutNG.

In a previous post, I gave an overview of the RenderingNG architecture goals and key properties. This post will explain how its component pieces are set up, and how the rendering pipeline flows through them.

Starting at the highest level and drilling down from there, the tasks of rendering are:

The contents to render are a tree of frames for each browser tab, plus the browser UI. And, a stream of raw input events from touch screens, mice, keyboards, and other hardware devices.

A frame is an HTML document, plus its URL. A web page loaded in a browser tab has a top-level frame, child frames for each iframe included in the top-level document, and their recursive iframe descendants.

A visual effect is a graphical operation applied to a bitmap, such as scroll, transform, clip, filter, opacity, or blend.

In RenderingNG, these tasks are split logically across several stages and code components. The components end up in various CPU processes, threads, and sub-components within those threads. Each plays an important role in achieving reliability, scalable performance and extensibility for all web content. 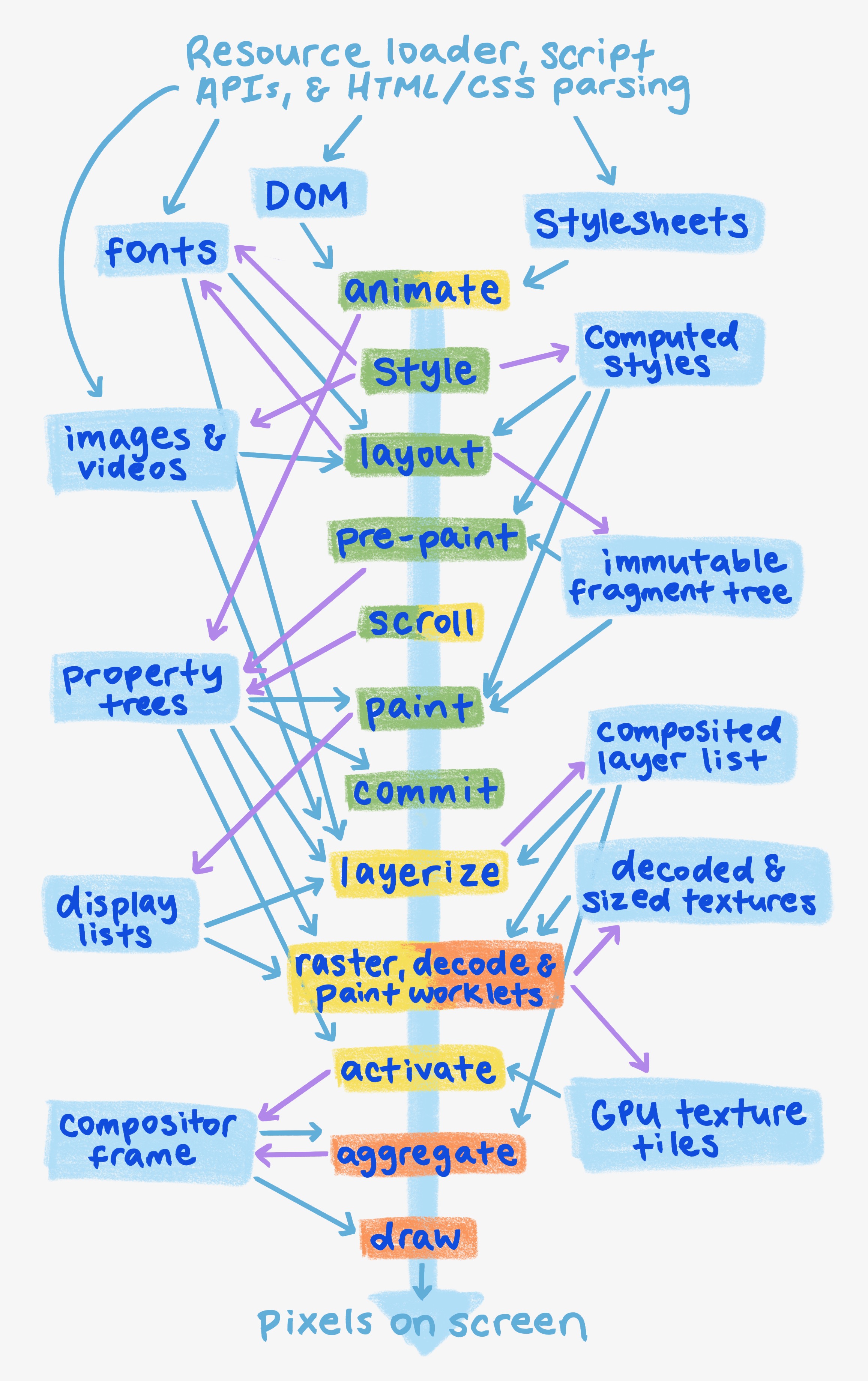 Rendering proceeds in a pipeline with a number of stages and artifacts created along the way. Each stage represents code that does one well-defined task within rendering. The artifacts are data structures that are inputs or outputs of the stages; in the diagram inputs or outputs are indicated with arrows.

This blog post won't go into much detail about the artifacts; that will be discussed in the next post: Key Data Structures and their roles in RenderingNG.

In the preceeding diagram, stages are notated with colors indicating in which thread or process they execute:

In some cases they can execute in multiple places, depending on the circumstance, which is why some have two colors.

Stages of the rendering pipeline can be skipped if they aren't needed. For example, animations of visual effects, and scroll, can skip layout, pre-paint and paint. This is why animation and scroll are marked with yellow and green dots in the diagram. If layout, pre-paint, and paint can be skipped for visual effects, they can be run entirely on the compositor thread and skip the main thread.

Browser UI rendering is not depicted directly here, but can be thought of as a simplified version of this same pipeline (and in fact its implementation shares much of the code). Video (also not directly depicted) generally renders via independent code that decodes frames into GPU texture tiles that are then plugged into compositor frames and the draw step.

There are more CPU processes and threads in the Chromium architecture than pictured here. These diagrams focus only on those critical to rendering. 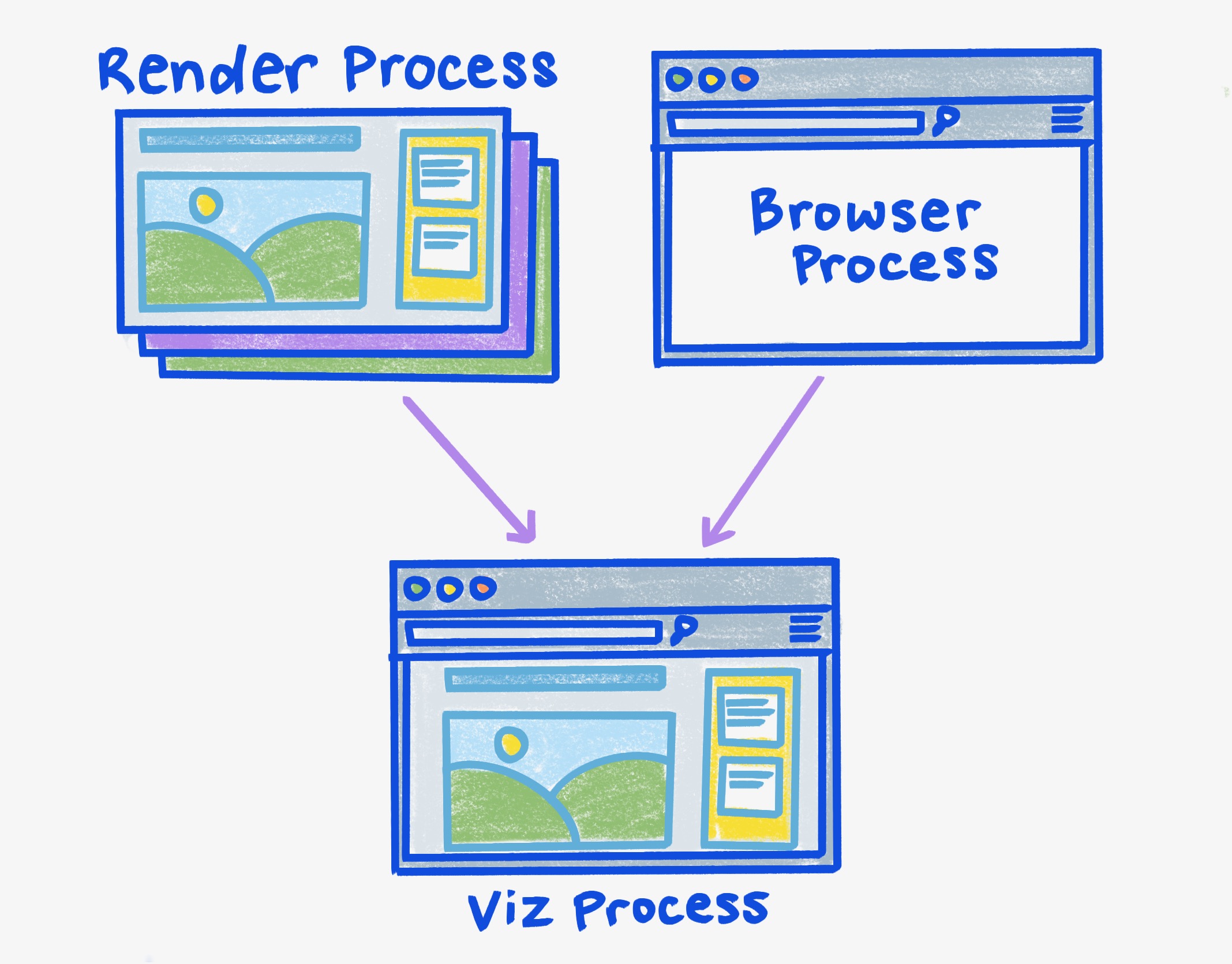 Different sites always end up in different render processes. (In reality, always on desktop; when possible on mobile. I'll write "always" below, but this caveat applies throughout.)

Multiple browser tabs or windows of the same site usually go in different render processes, unless the tabs are related (one opening the other). Under strong memory pressure on desktop Chromium may put multiple tabs from the same site into the same render process even if not related.

There is exactly one Viz process for all of Chromium. After all, there is usually only one GPU and screen to draw to. Separating Viz into its own process is good for stability in the face of bugs in GPU drivers or hardware. It's also good for security isolation, which is important for GPU APIs like Vulkan. It's also important for security in general.

Since the browser can have many tabs and windows, and all of them have browser UI pixels to draw, you might wonder: why there is exactly one browser process? The reason is that only one of them is focused at a time; in fact, non-visible browser tabs are mostly deactivated and drop all of their GPU memory. However, complex browser UI rendering features are increasingly being implemented in render processes as well (known as WebUI). This is not for performance isolation reasons, but in order to take advantage of the ease of use of Chromium's web rendering engine.

On older Android devices, the render and browser process are shared when used in a WebView (this does not apply to Chromium on Android generally, just WebView). On WebView, the browser process is also shared with the embedding app, and WebView has only one render process.

There is also sometimes a utility process for decoding protected video content. This process is not depicted above. 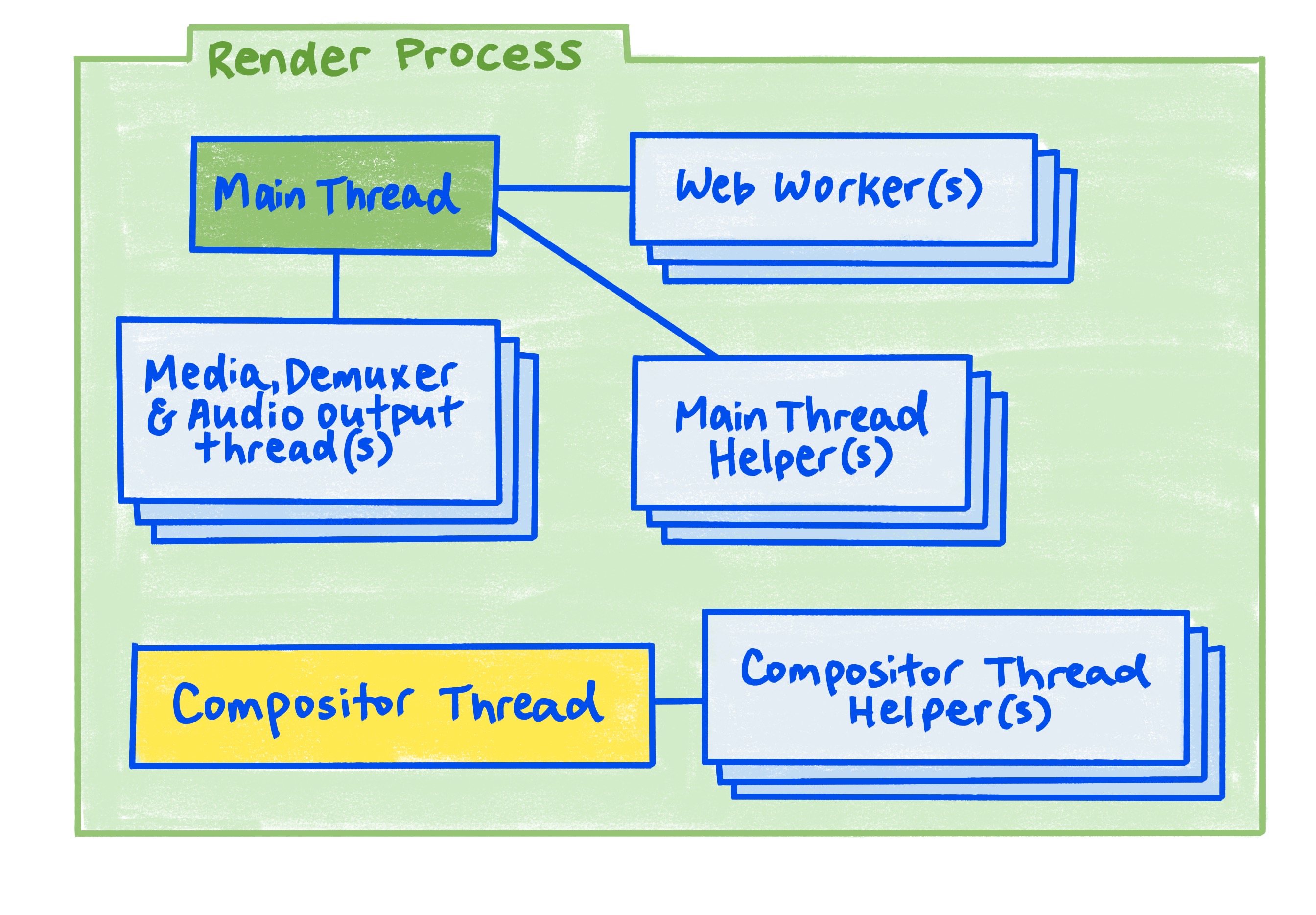 Separating the main and compositor threads is critically important for performance isolation of animation and scrolling from main thread work.

There is only one main thread per render process, even though multiple tabs or frames from the same site may end up in the same process. However, there is performance isolation from work performed in various browser APIs. For example, generation of image bitmaps and blobs in the Canvas API run in a main thread helper thread.

Likewise, there is only one compositor thread per render process. It is generally not a problem that there is only one, because all of the really expensive operations on the compositor thread are delegated to either compositor worker threads or the Viz process, and this work can be done in parallel with input routing, scrolling or animation. Compositor worker threads coordinate tasks run in the Viz process, but GPU acceleration everywhere can fail for reasons outside of Chromium's control, such as driver bugs. In these situations the worker thread will do the work in a fallback mode on the CPU.

The number of compositor worker threads depends on the capabilities of the device. For example, desktops will generally use more threads, as they have more CPU cores and are less battery-constrained than mobile devices. This is an example of scaling up and scaling down.

It's also interesting to note that the render process threading architecture is an application of three different optimization patterns: 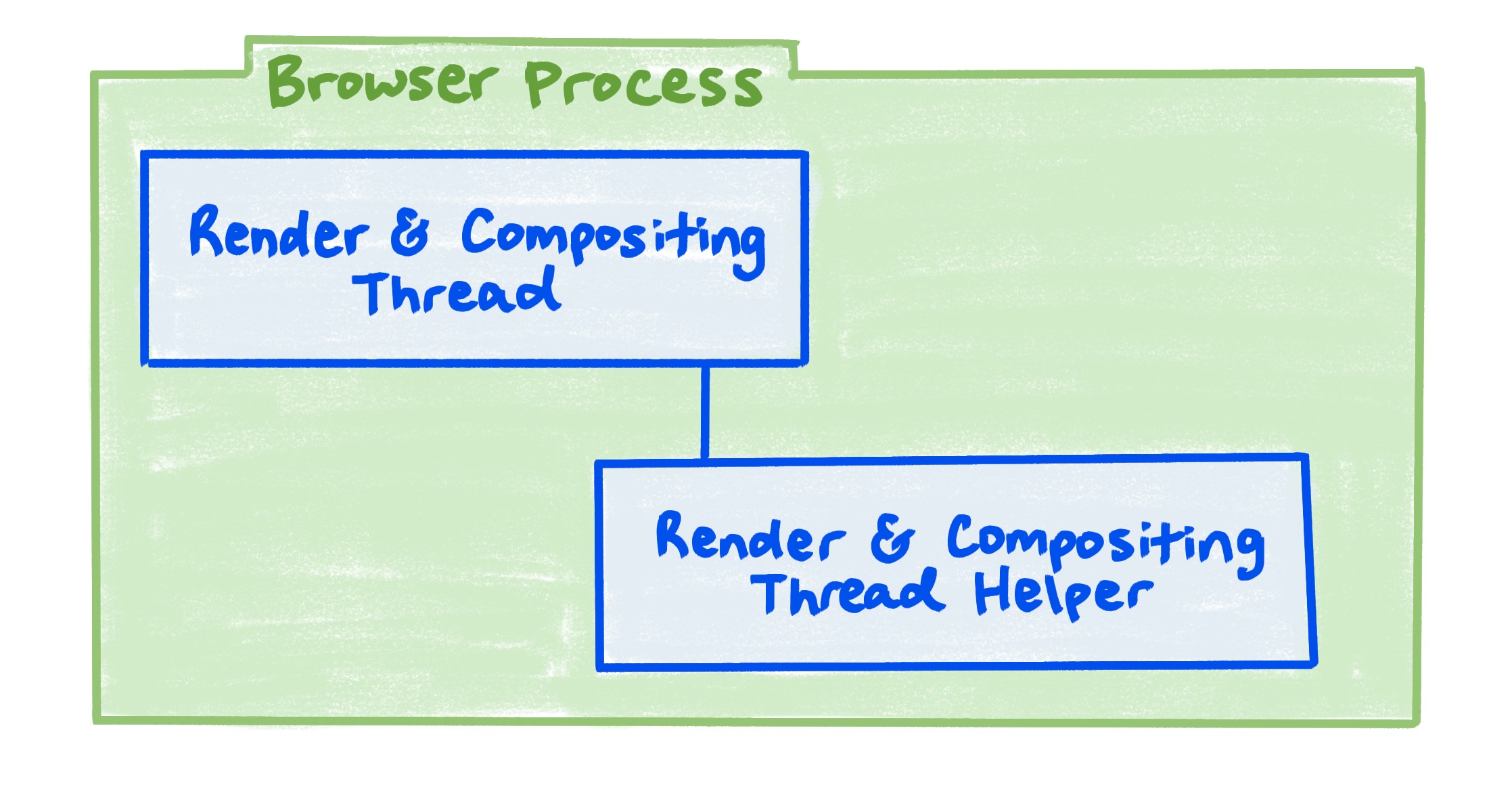 The browser process render and compositing thread are similar to the code and functionality of a render process, except that the main thread and compositor thread are combined into one. There is only one thread needed in this case because there is no need for performance isolation from long main thread tasks, since there are none by design. 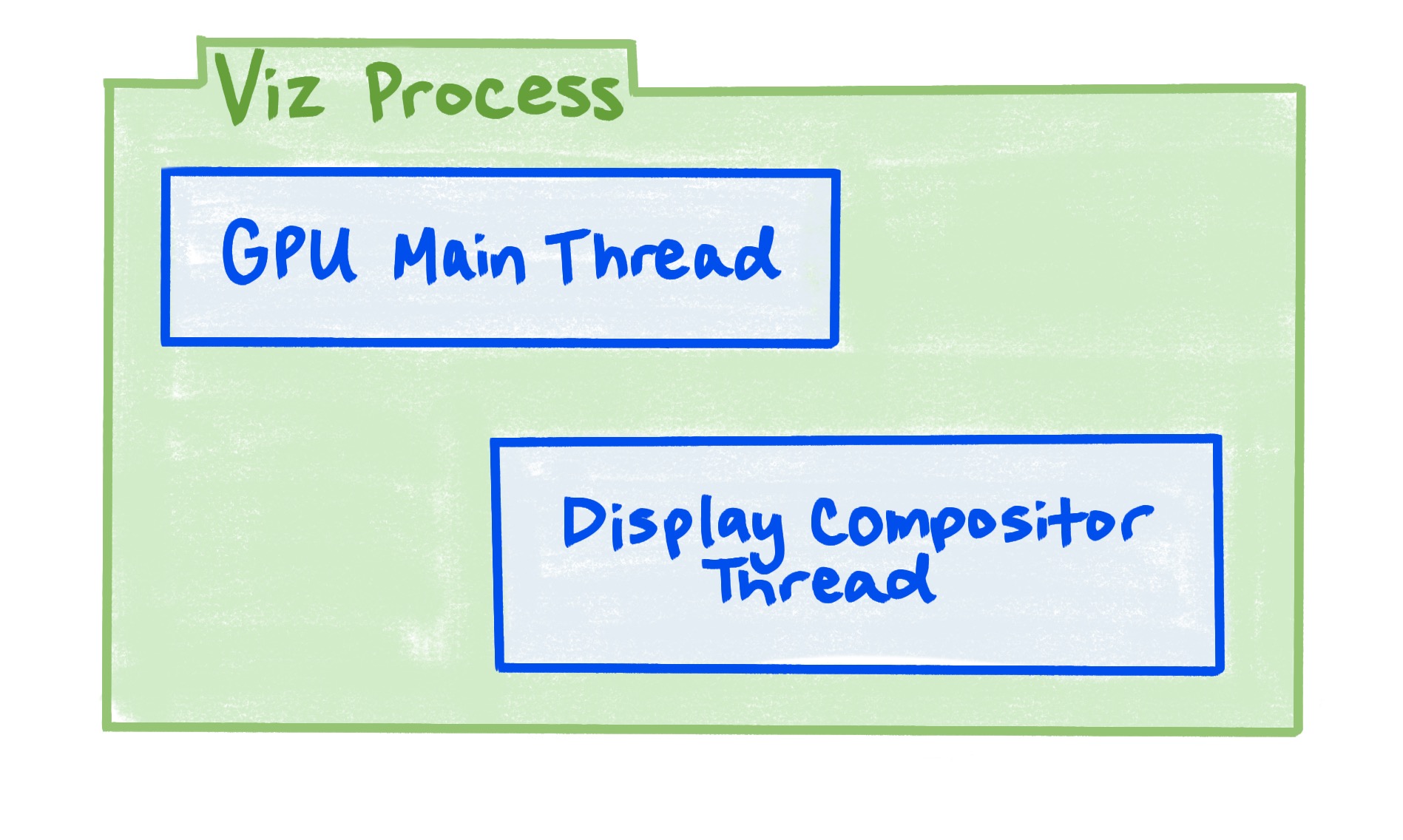 Raster and draw generally happen on the same thread, because both of them rely on GPU resources, and it's hard to reliably make multi-threaded use of the GPU (easier multi-threaded access to the GPU is one motivation for developing the new Vulkan standard). On Android WebView, there is a separate OS-level render thread for drawing because of how WebViews are embedded into a native app. Other platforms will likely have such a thread in the future.

Within each render process main or compositor thread, there are logical software components that interact with each other in structured ways. 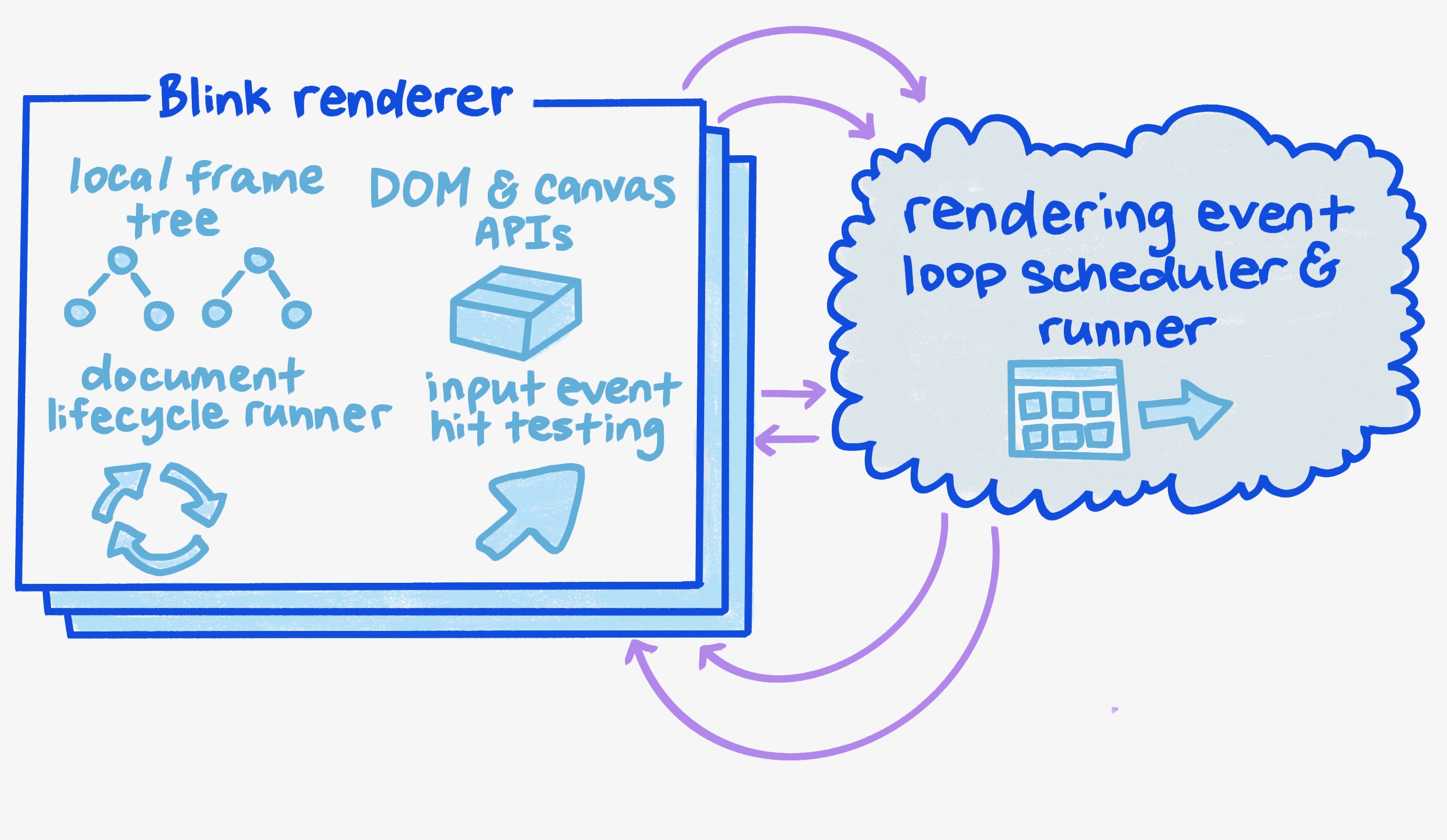 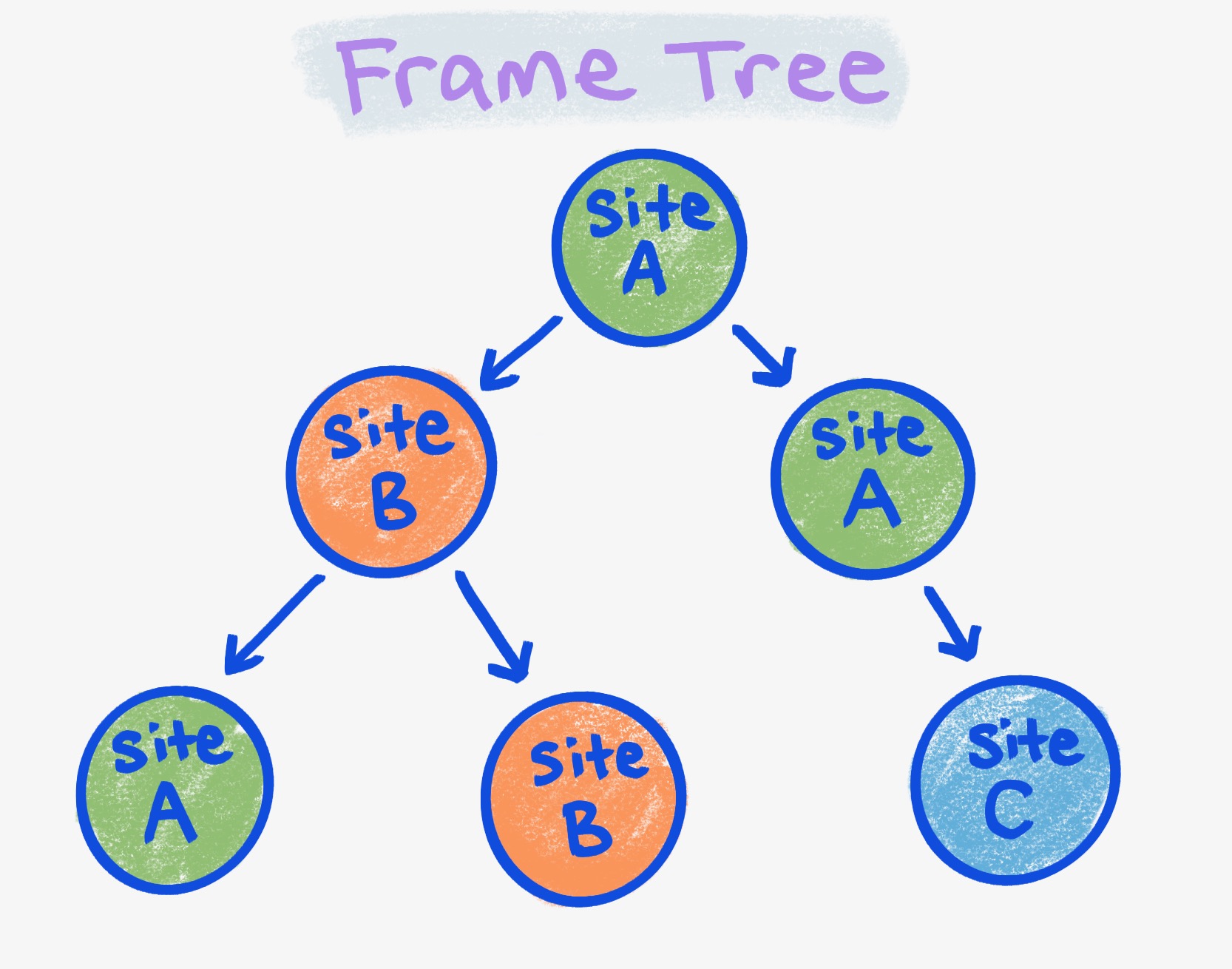 Local frame tree fragments are a bit complicated to think about. Recall that a frame tree is the main page and its child iframes, recursively. A frame is local to a render process if it is rendered in that process, and otherwise it is remote.

You can imagine coloring frames according to their render process. In the preceding image, the green circles are all frames in one render process; the red ones are in a second, and the blue one is in a third. 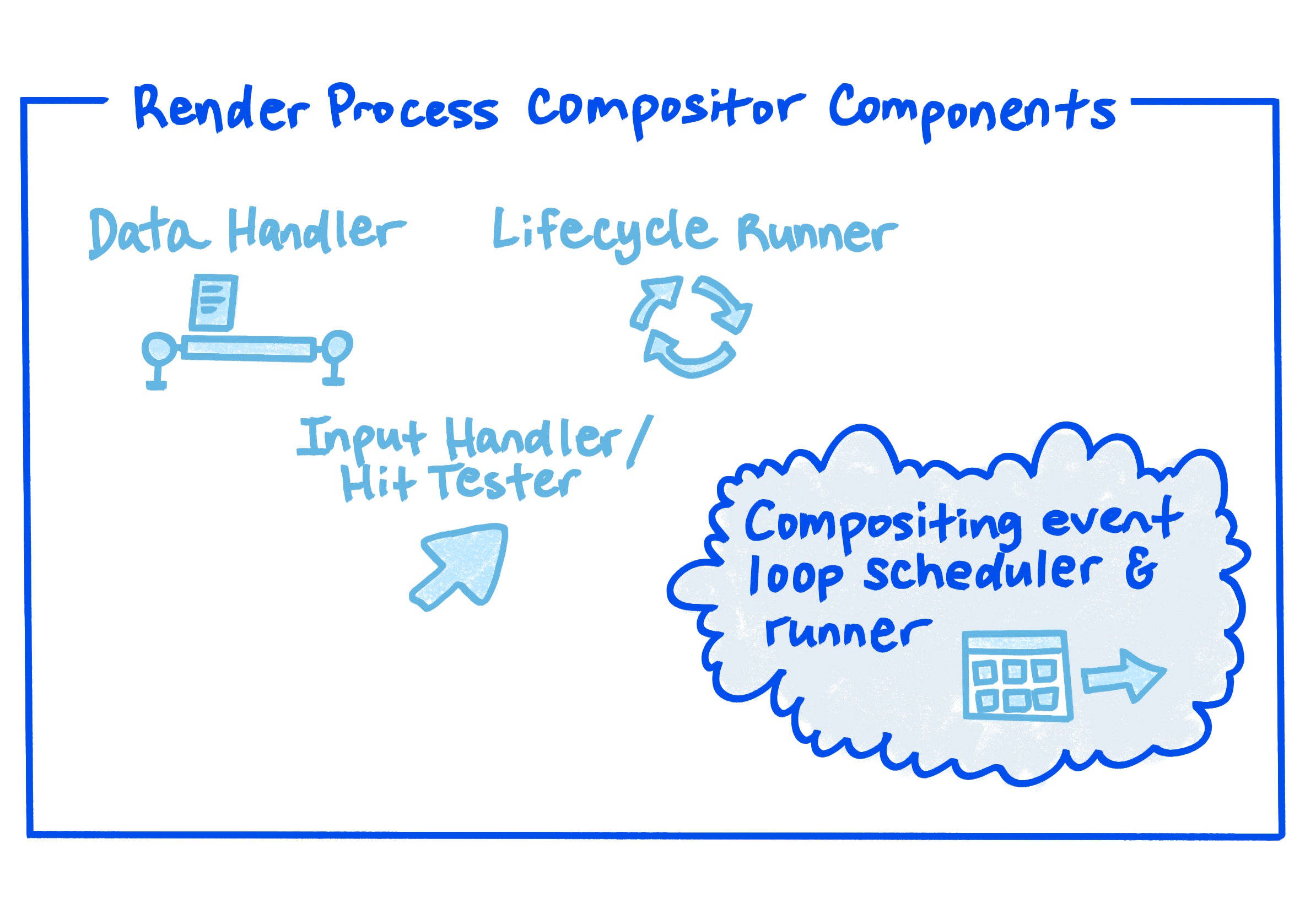 The render process compositor components include:

# An example in practice

Let's now make the architecture concrete with an example. In this example there are three tabs:

The process, thread and component structure for these tabs will look like this: 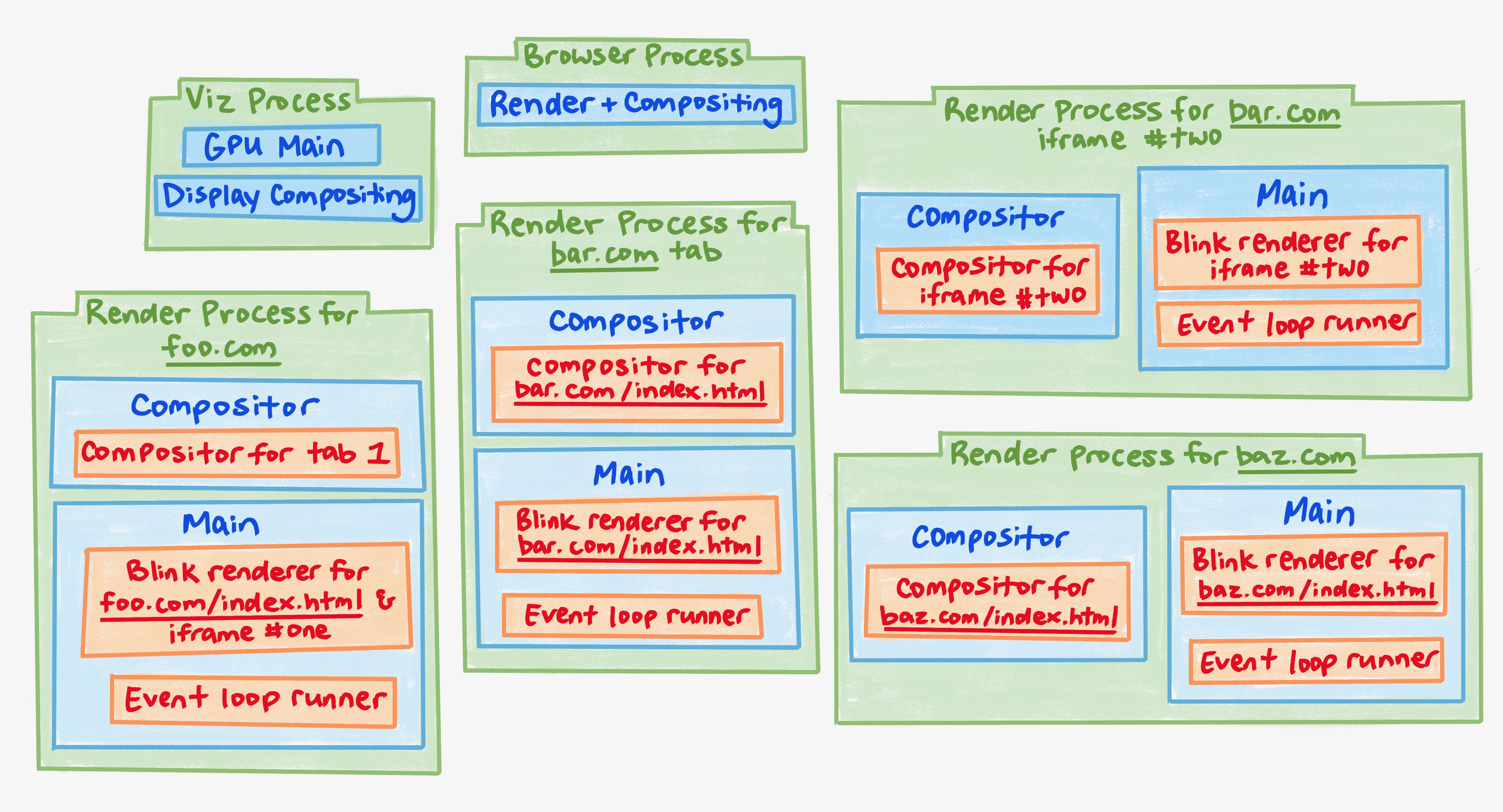 Now let's walk through one example each of the four main tasks of rendering, which as you may recall are:

To render the changed DOM for tab one: 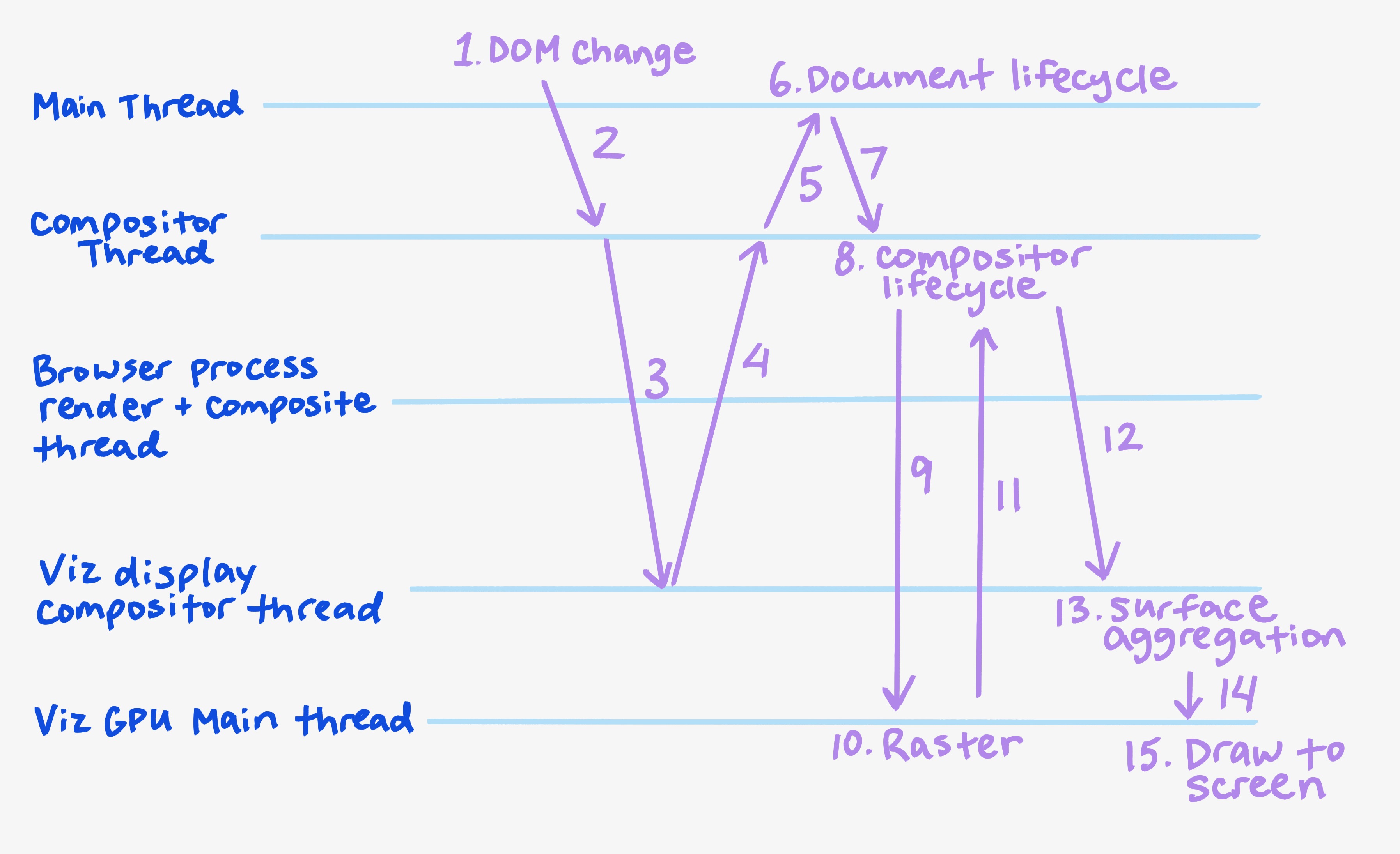 To animate a CSS transform transition on tab two: 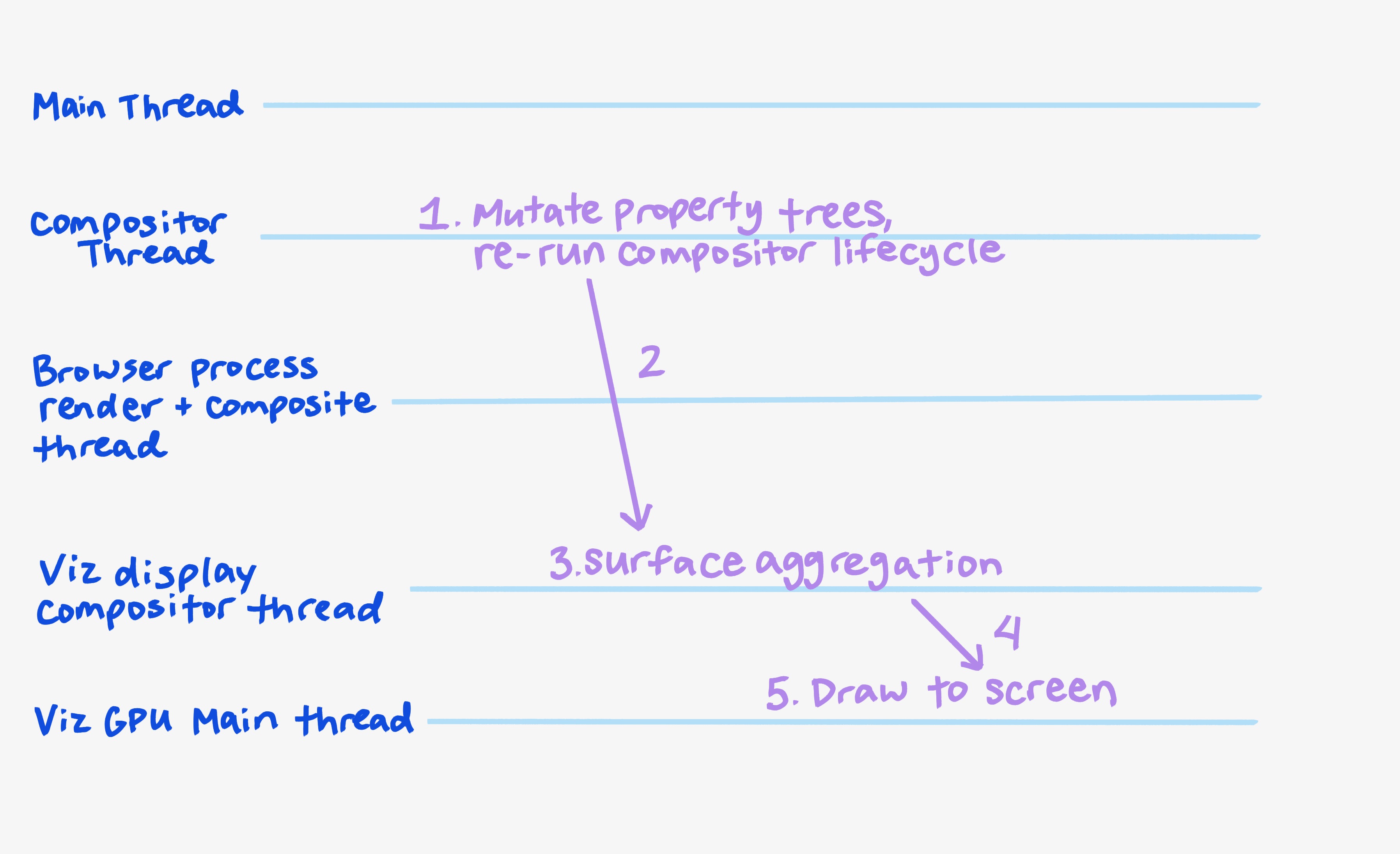 To scroll the web page on tab three: 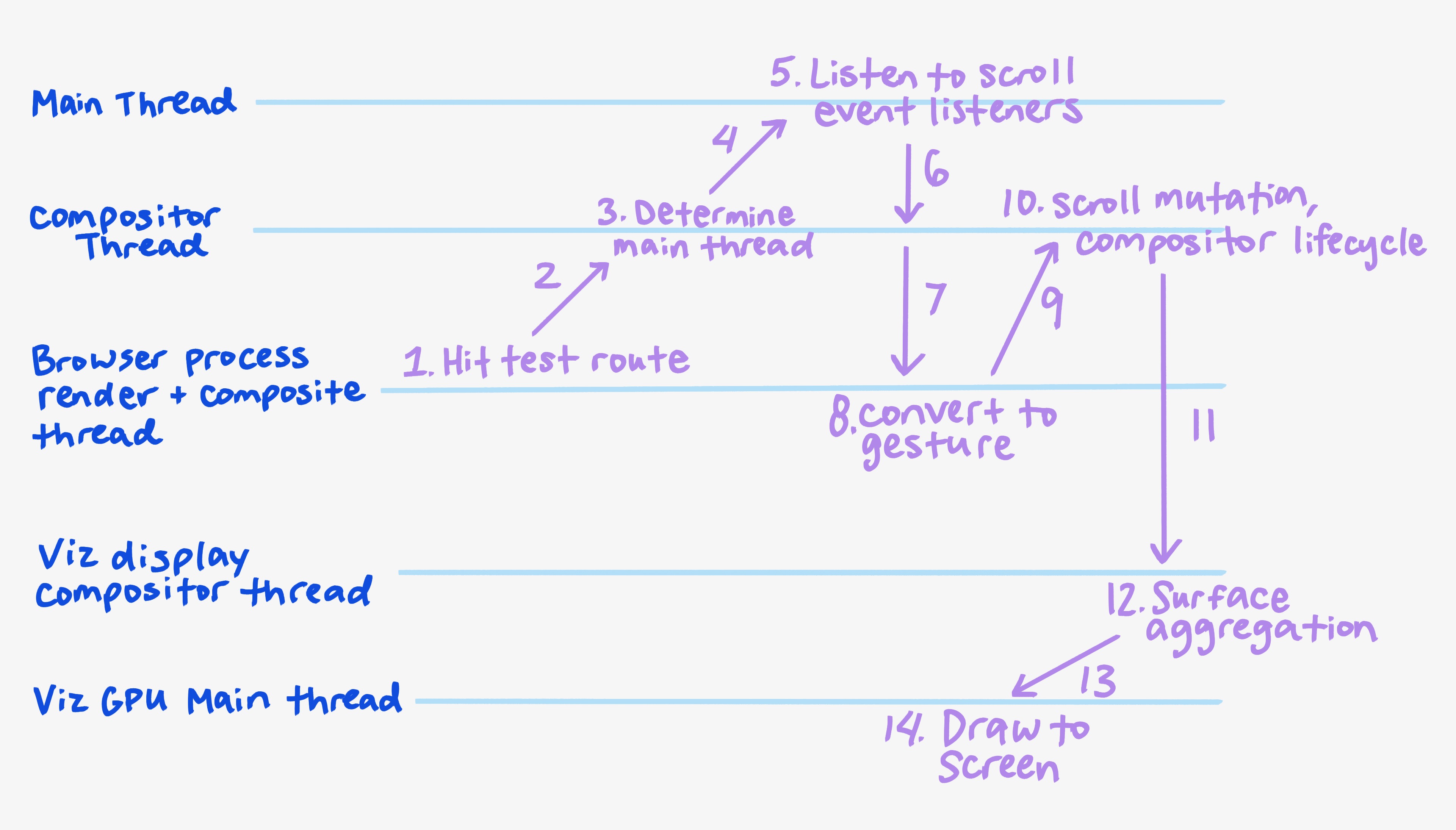 Note that each input event after the first can skip steps three and four, because the scroll has already begun and at that point scripts can observe it via the scroll event, but no longer interrupt.

To route a click event on a hyperlink in iframe #two on tab one: 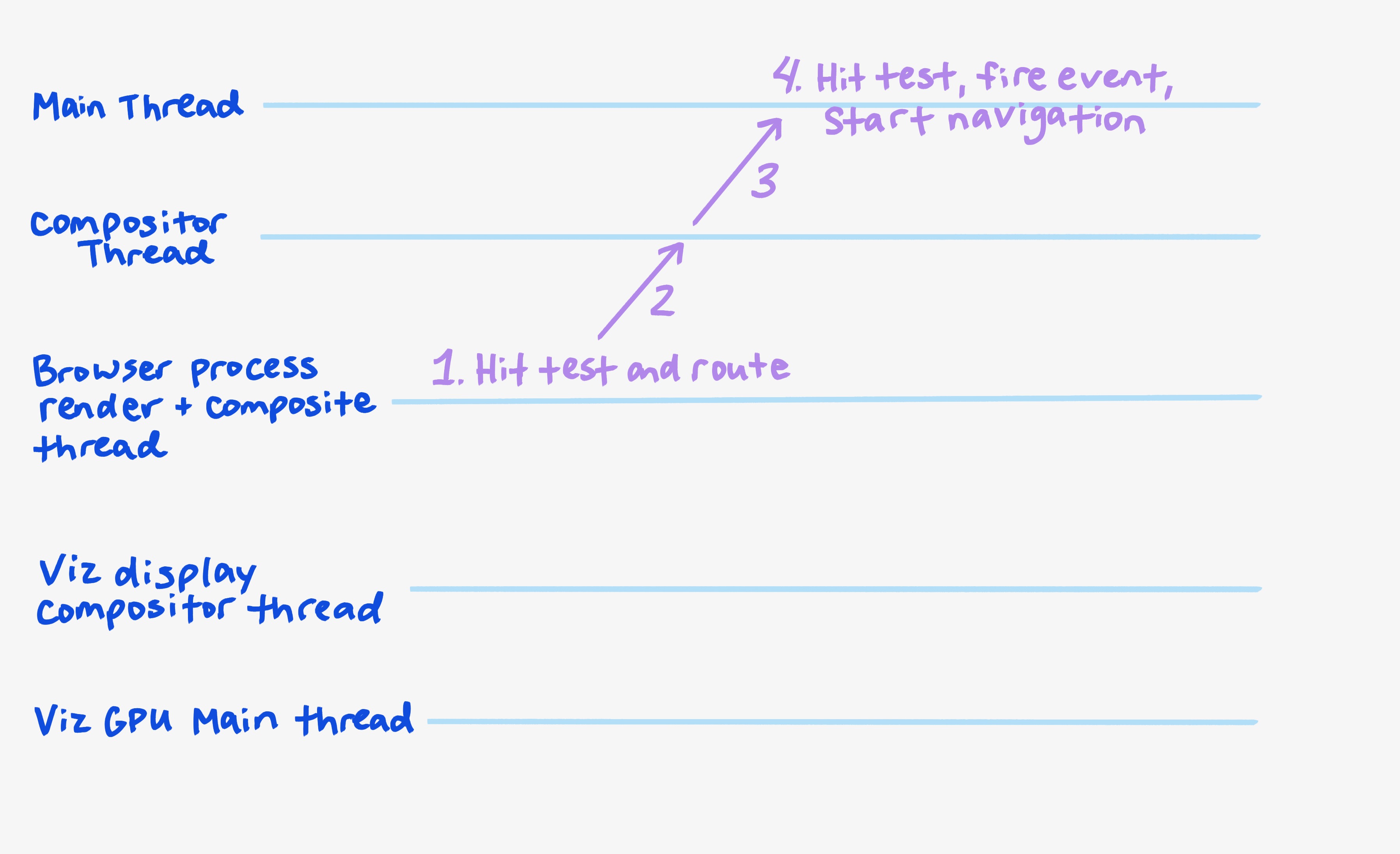 Phew, that was a lot of detail. As you can see, rendering in Chromium is quite complicated! It can take a lot of time to remember and internalize all the pieces, so don't be worried if it seems overwhelming.

The most important takeaway is that there is a conceptually simple rendering pipeline, which through careful modularization and attention to detail, has been split into a number of self-contained components. These components have then been split across parallel processes and threads to maximize scalable performance and extensibility opportunities.

Each of those components plays a critical role in enabling all of the performance and features modern web apps need. Soon we'll publish deep-dives into each of them, and the important roles they play.

But before that, I'll also explain how the key data structures mentioned in this post (the ones indicated in blue at the sides of the rendering pipeline diagram) are just as important to RenderingNG as code components.

Thanks for reading, and stay tuned!