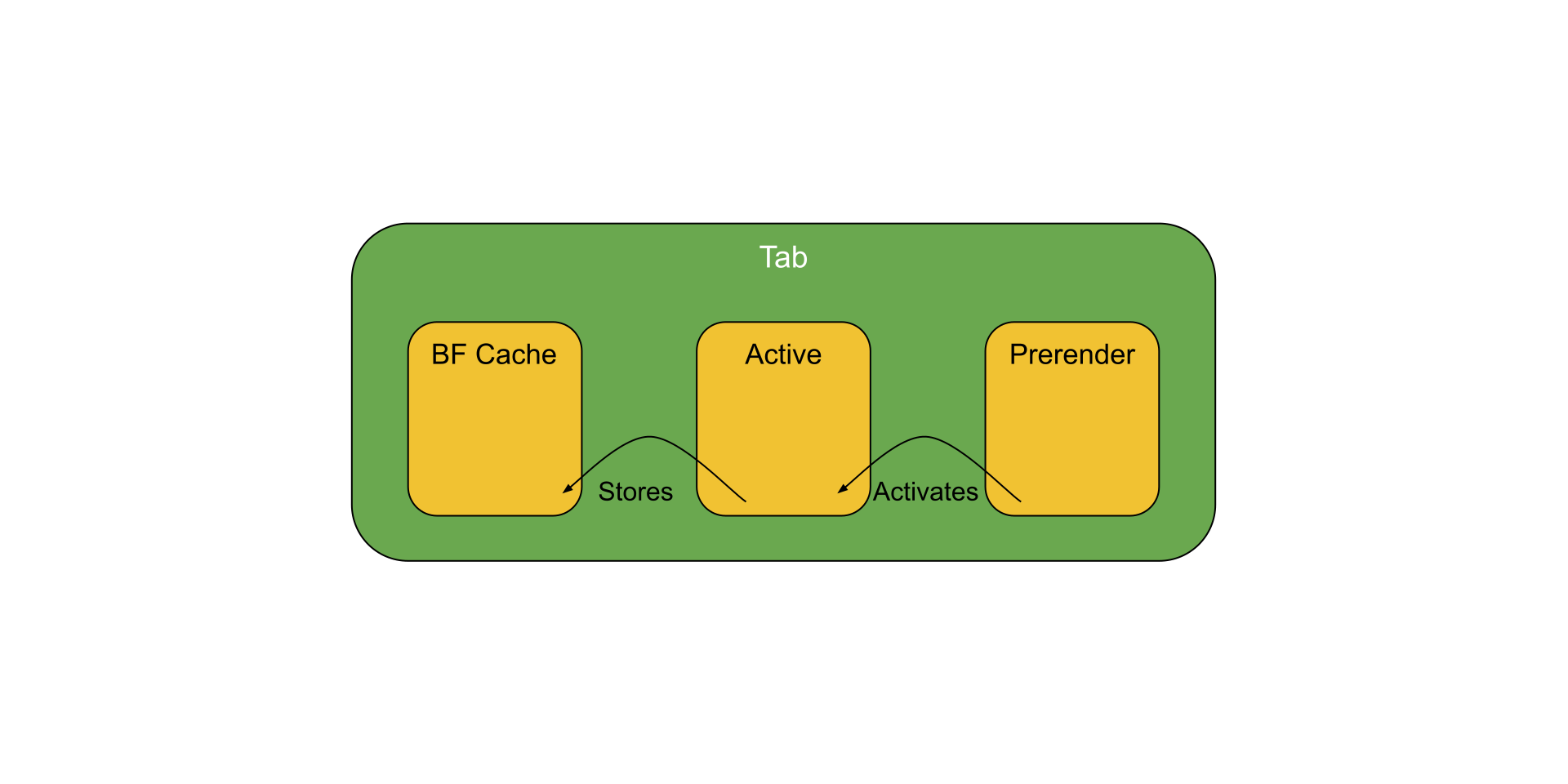 Dave is a contributor to Chrome Developers

TL;DR: The Extensions API has been updated to support back/forward cache, preloading navigations. See below for details.

Chrome has been working hard at making navigation fast. Instant Navigation technologies such as Back/Forward Cache (shipped on desktop in Chrome 96) and Speculation Rules (shipped in Chrome 103) improve both the going back and going forward experience. In this post we will explore the updates we’ve made to browser extensions APIs to accommodate these new workflows.

# Understanding the types of pages

Prior to the introduction of Back/Forward Cache and prerendering, an individual tab only had one active page. This was always the one that was visible. If a user returns to the previous page, the active page would be destroyed (Page B) and the previous page in history would be completely reconstructed (Page A). Extensions did not need to worry about what part of the life cycle pages were in because there was only one for a tab, the active/visible state.

With Back/Forward Cache and prerendering, there is no longer a one to one relationship between tabs and pages. Now, each tab actually stores multiple pages and pages transition between states rather than being destroyed and reconstructed.

For example, a page could begin its life as a prerendered (not visible) page, transition into an active (visible) page when the user clicks a link, and then be stored in the Back/Forward Cache (not visible) when the user navigates to another page, all without the page ever being destroyed. Later in this article we will look at the new properties exposed to help extensions understand what state pages are in.

Note that a tab can have a series of prerendered pages (not just one), a single active (visible) page, and a series of Back/Forward cached pages.

In Chromium, we refer to the topmost/main frame as the outermost frame.

# Life cycle of frames versus documents

Another concept that is problematic with extensions is the life cycle of the frame. A frame hosts a document (which is associated with a committed URL). The document can change (say by navigating) but the frameId won’t, and so it is difficult to associate that something happened in a specific document with just frameIds. We are introducing a concept of a documentId which is a unique identifier for each document. If a frame is navigated and opens a new document the identifier will change. This field is useful for determining when pages change their life cycle state (between prerender/active/cached) because it remains the same.

Events in the [chrome.webNavigation namespace] can fire multiple times on the same page depending on the life cycle it is in. See “How do I tell what life cycle the page is in?” and “How do I determine when a page transitions?” sections.

# How do I tell what life cycle the page is in?

The DocumentLifecycle type has been added to a number of extensions APIs where the frameId was previously available. If the DocumentLifecycle type is present on an event (such as onCommitted), its value is the state in which the event was generated. You can always query information from the WebNavigation getFrame() and getAllFrames() methods, but using the value from the event is always preferred. If you do use either method be aware the state of the frame may change between when the event was generated and when the promises return by both methods is resolved.

The DocumentLifecycle has the following values:

# How do I determine if a frame is the outermost frame?

To help with this, we introduced a new type called FrameType so determining if the frame is indeed the outermost frame is now easy.

[FrameType] has the following values:

We can combine DocumentLifecycle with FrameType and determine if a frame is the active outermost frame. For example:

# How do I solve time of use problems with frames?

As we said above a frame hosts a document and the frame may navigate to a new document, but the frameId will not change. This creates problems when you receive an event with just a frameId. If you look up the URL of the frame it might be different than when the event occured, this is called a time of use issue.

To address this, we introduced documentId (and parentDocumentId). The webNavigation.getFrame() method now makes the frameId optional if a documentId is provided. The documentId will change whenever a frame is navigated.

# How do I determine when a page transitions?

There are explicit signals to determine when a page transitions between states.

Let’s look at the WebNavigation events.

For a very first navigation of any page you will see four events in the order listed below. Note that these four events could occur with the DocumentLifecycle state being either "prerender" or "active".

This is illustrated in the diagram below which shows the documentId changing to "xyz" when the prerendered page becomes the active page.

When a page transitions from either Back/Forward Cache or prerender to the active state there will be three more events (but with DocumentLifecyle being "active").

The documentId will remain the same as in the original events. This is illustrated above when documentId == xyz activates. Note that the same navigation events fire, except for the onDOMContentLoaded event because the page has already been loaded.

If you have any comments or questions please feel free to ask on the chromium-extensions group.