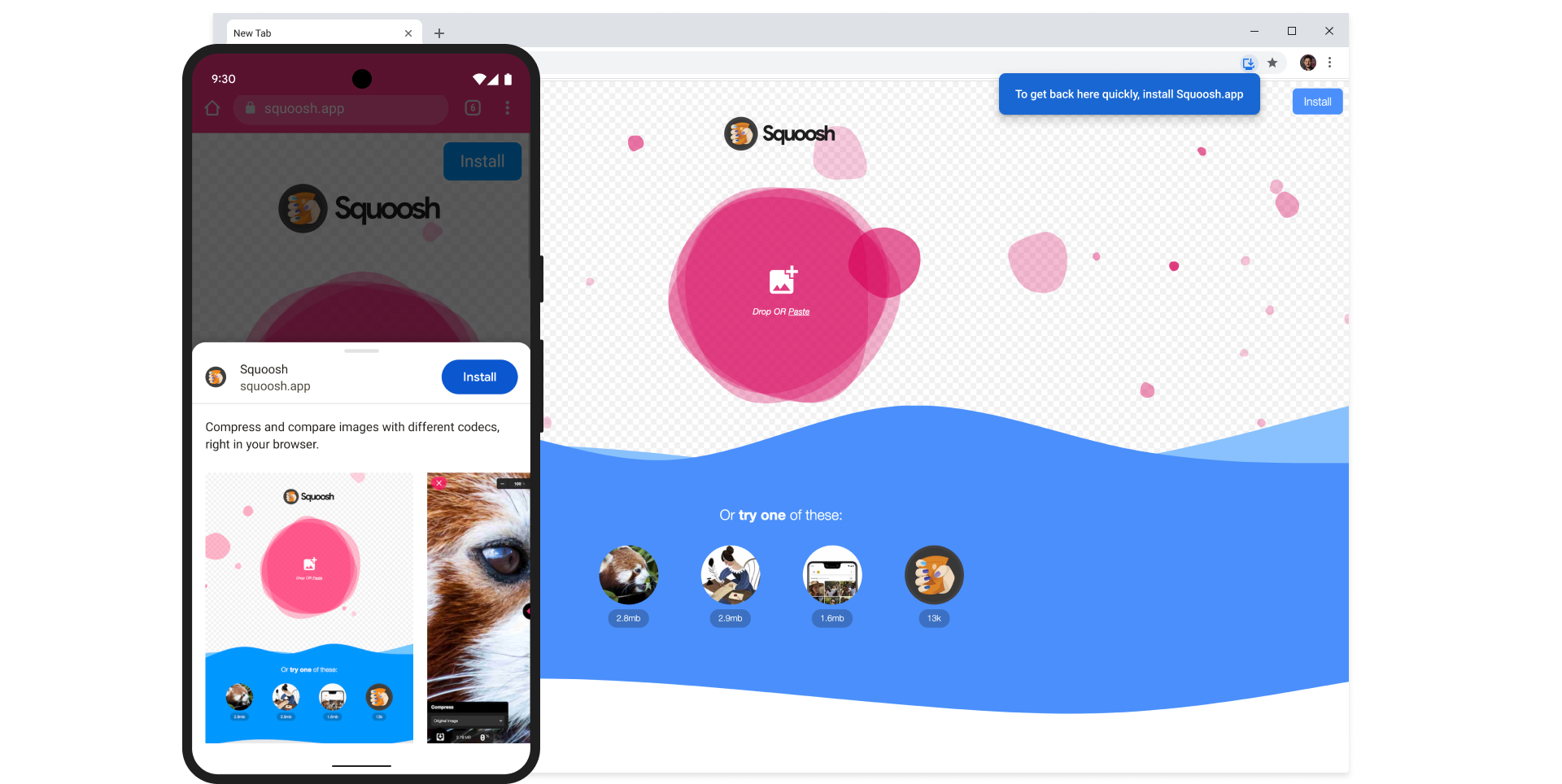 At the beginning of 2020, the Chrome team across mobile and desktop laid out a plan to improve the discoverability and engagement of installed web apps. Our work led to a greater than 100% increase in PWA installation and engagement. We achieved this by researching existing features, running A/B test experiments and user interviews to gain insight into users perceptions and expectations. This article covers how we got there.

The call-to-action that triggers a PWA install was inconsistent across the web platform. For Chrome on Android, we had settled on Add to home screen, but on our Desktop Platforms, we emphasized Install. The rationale for this discrepancy came from a study the team ran in 2016 that compared different strings. The team found that Add to home screen worked better, if only marginally, on mobile.

A further study on taxonomy in 2019 found no difference, and so the team wanting to unify the PWA install experience, decided to update the label to Install on Android. A further study in 2021 compared the language, Install, Get, and Download, and we found that users understood Install as the process that was happening. Users felt tapping a button with the label Get would send the user to a website, and with Download they assumed a file would end up in their downloads folder or equivalent.

With all this in mind, we concluded that the label Install best fits PWAs. We recommend developers across the web platform adopt Install as the preferred string going forward.

On our desktop platforms, we have a design pattern that whenever a website loads a PWA, Chrome will show a pill that appears on the right-hand side of the omnibox that contains an icon and the label Install. After that, when a user visits a site, only the icon will be present. Clicking on this pill triggers the installation of a desktop PWA.

The icon was initially a plus symbol, partly due to the Add to home screen metaphor used on mobile. However, as mentioned, the language we used was Install. The feedback we received from the developer community was that this icon was confusing. Furthermore, if a user used the zoom function to enlarge text, the icon for zoom looked very similar, confusing the user even more.

I decided to investigate our user's perception, as most feedback was anecdotal. Working with our UX researchers, we ran a study with 10,000 users in the USA and Indonesia to determine users' understanding of install iconography. We tested five different designs, including the existing one, and asked users what "Install" meant. We discovered that the current icon, the plus symbol, was the most confusing to our users. Many confused the symbol with "medicine", "first aid" and "batteries".

We also found that users primarily associated imagery such as arrows and devices with the install. Based on these conclusions, we ran an A/B/C test in Chrome, comparing the existing design with two alternatives. We landed on the arrow pointing down into a monitor, which performed significantly better than the other two. We also saw a decrease in dismissals of the install UI with this new icon.

The outcome is the design you see today, which has seen the install rate for PWAs more than double for websites. We have also added this icon and a mobile equivalent to our Material Design icon set, enabling the community to use the iconography that we found most engaging.

Of course, a single icon will not change the world, which leads us to our next feature.

In-Product Help is a blue bubble tooltip that onboards users on new features that may interest them based on specific criteria. We decided to launch this design pattern to inform users about the install features and further support the new icon redesign.

When a user visits a website regularly, Chrome uses a service known as Site Engagement. This provides information about how engaged a user is with a site. By visiting chrome://site-engagement/, you can see the sites that you are engaging with regularly. Using these scores, we could determine if a user is interested in a website. If the site was a PWA and the user was engaged we would show them the install In-Product Help UI. This meant that we only focused on engaged users and not annoy users who may visit a site one time.

By using in-product help on desktop, we saw a greater than 100% increase in PWA installation, showing that focusing on engaged users improved the installability of web apps.

The install paradigm for most users is a store. Since the mid-2000's we have educated users that whenever they are installing an app, they will see a description, screenshots, and other metadata to help them decide if an app is something they want.

With PWAs, the UI we showed once a user had decided to install a web app was relatively meager. So the team decided to explore a richer install experience that would give context to our users about the web app and enable developers to celebrate the PWA's that were on par with native experiences.

Earlier this year, we launched Richer Install, an extended install UI on Chrome on Android that allows developers to add screenshots to their manifest. Developers can also add a description, which is recommended but not necessary. Due to this newer UI, we saw an install rate for some PWAs double, showing that users have greater confidence in installing web apps when we give more context and richer experiences.. The desktop version of this UI is currently a work in progress.

The team has spent the last two years exploring and experimenting with newer features in Chrome that have enabled and empowered PWA developers and helped to educate users about the benefits of web experiences. There is still plenty of work we can do, but collectively we can improve and enrich our users' lives and further support the open web.