Manage how your page and third-party iframes on your page have access to browser features.

Permissions Policy, formerly known as Feature Policy, allows the developer to control the browser features available to a page, its iframes, and subresources, by declaring a set of policies for the browser to enforce. These policies are applied to origins provided in a response header origin list. The origin list can contain same-origins and/or cross-origins, and it allows the developer to control first-party and third-party access to browser features.

The user has the final decision to allow access to more powerful features, and needs to provide explicit permission via a prompt.

Permissions Policy allows the top-level site to define what it and its third parties intend to use, and removes the burden from the user of determining whether the feature access request is legitimate or not. For example, by blocking the geolocation feature for all third parties via Permissions Policy, the developer can be certain that no third party will gain access to the user's geolocation.

Privacy Sandbox is a series of proposals to satisfy third-party use cases without third-party cookies or other tracking mechanisms.

Permissions Policy was previously known as Feature Policy. The key concepts remain the same, but there are some important changes along with the name.

Therefore, we recommend developers explicitly set the Permissions Policy header in the response, so that cross-origin iframes which aren't listed in the origin list are blocked from accessing this feature, even if allow is present.

Before we dive deep, let's take a quick look at a common scenario where you are the owner of a website and you want to control how your site and third-party code use browser features.

In this case, use the following header:

And explicitly set the allow attribute to the iframe tag for the trusted site: 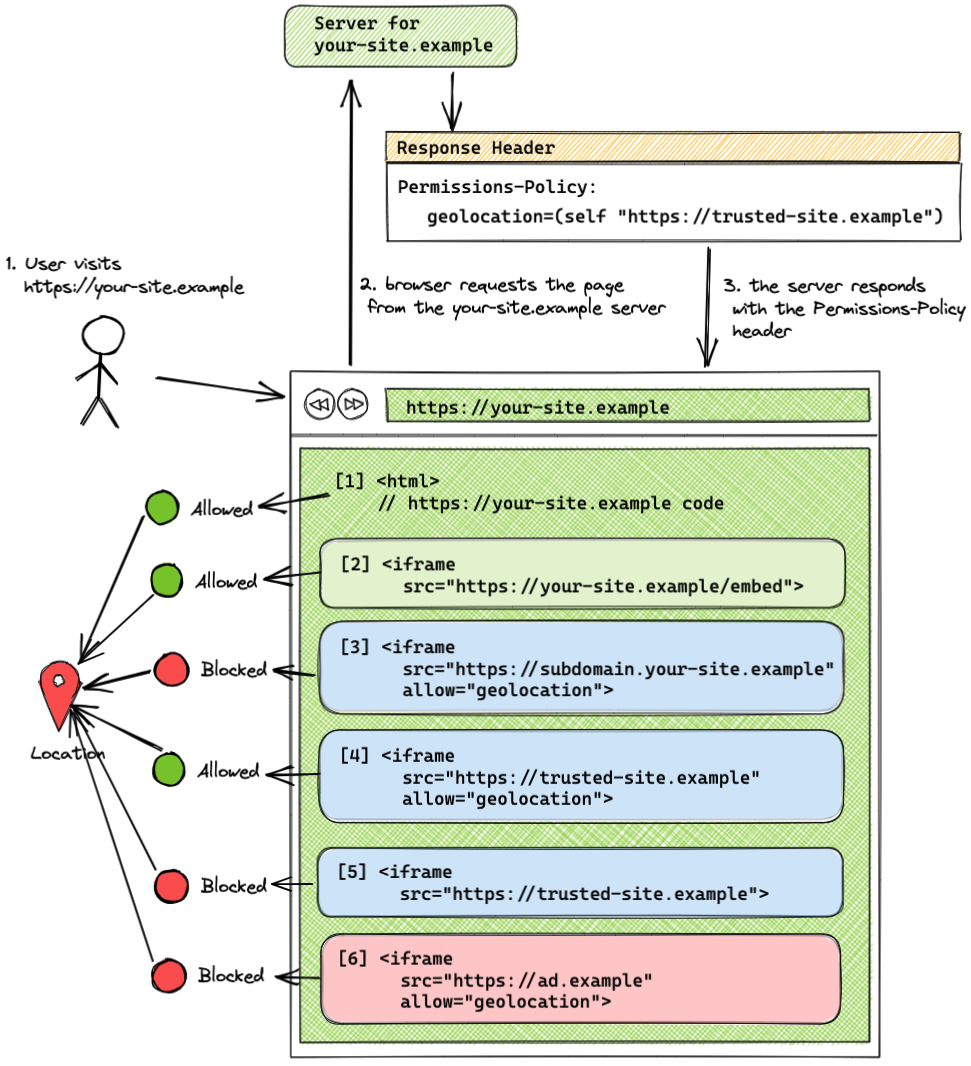 In this example, the header origin list lets only your site (self) and trusted-site.example to use the geolocation feature. ad.example is not allowed to use geolocation. 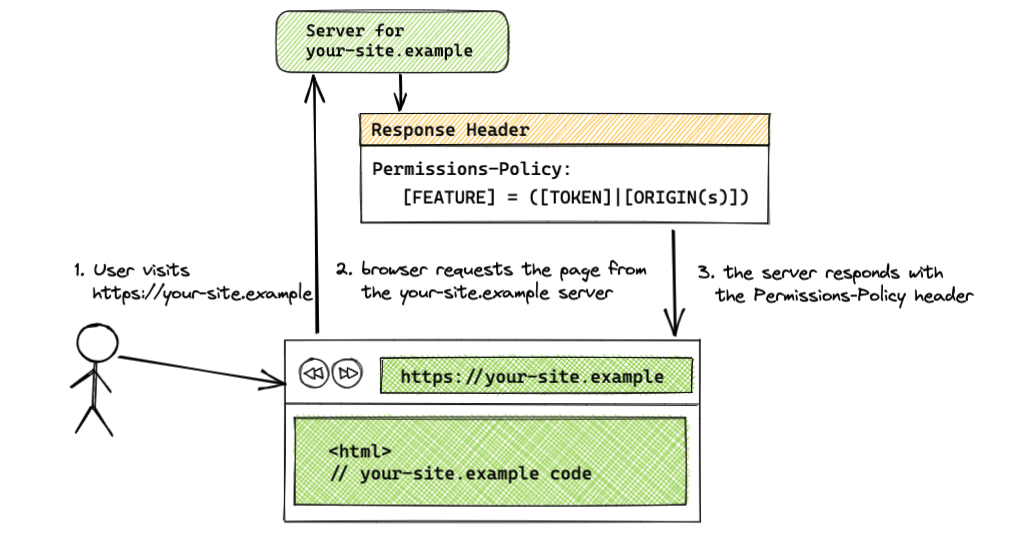 Use a Permissions-Policy header in the response from the server to set the allowed origins for a feature. The header value can take a combination of tokens and strings of origins. The available tokens are * for all origins and self for same-origin.

If your header is for multiple features, separate the features with a comma. If you list multiple origins, separate each origin in the origin list with a space. For headers which list an origin that's a cross-origin request, the iframe tag must include the allow attribute.

Here are some example key-value pairs:

If the Permission Policy header is not present in the response, the default value * token is used. This allows all iframes on the page with an allow attribute to use the feature. Therefore, it is strongly recommended that the origin list is explicitly set in the Permissions-Policy header to control access.

Different subdomains, such as https://your-site.example and https://subdomain.your-site.example, are considered same-site but cross-origin. Therefore, adding a subdomain in the origin list does not allow access to another subdomain of the same site. Every embedded subdomain that wants to use the feature must be added separately to the origin list. For example, if access to the user's browsing topics is allowed to the same-origin only with the header Permissions-Policy: browsing-topics=(self), an iframe from a different subdomain of the same site, https://subdomain.your-site.example, will not have access to the topics.

For cross-origin usage, an iframe needs the allow attribute in the tag to gain access to the feature. 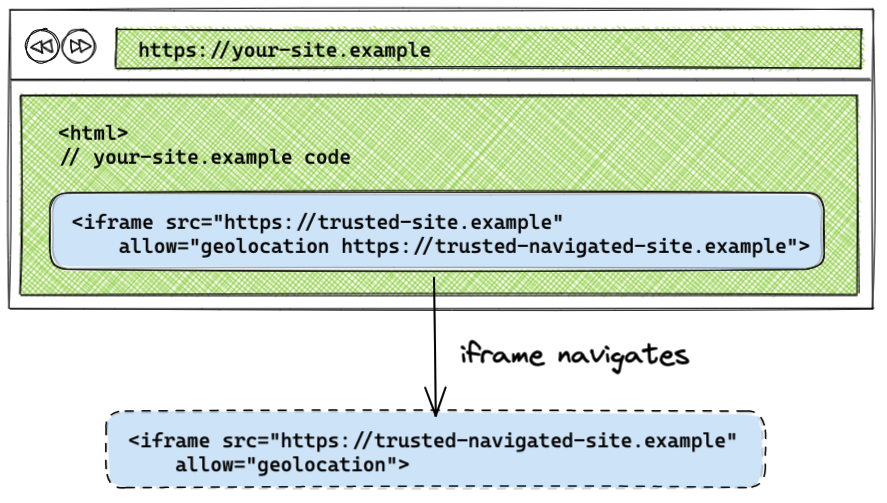 You can see it in action by visiting the iframe navigation demo.

The examples of the following setups can be found in the demo.

# Feature allowed on all origins 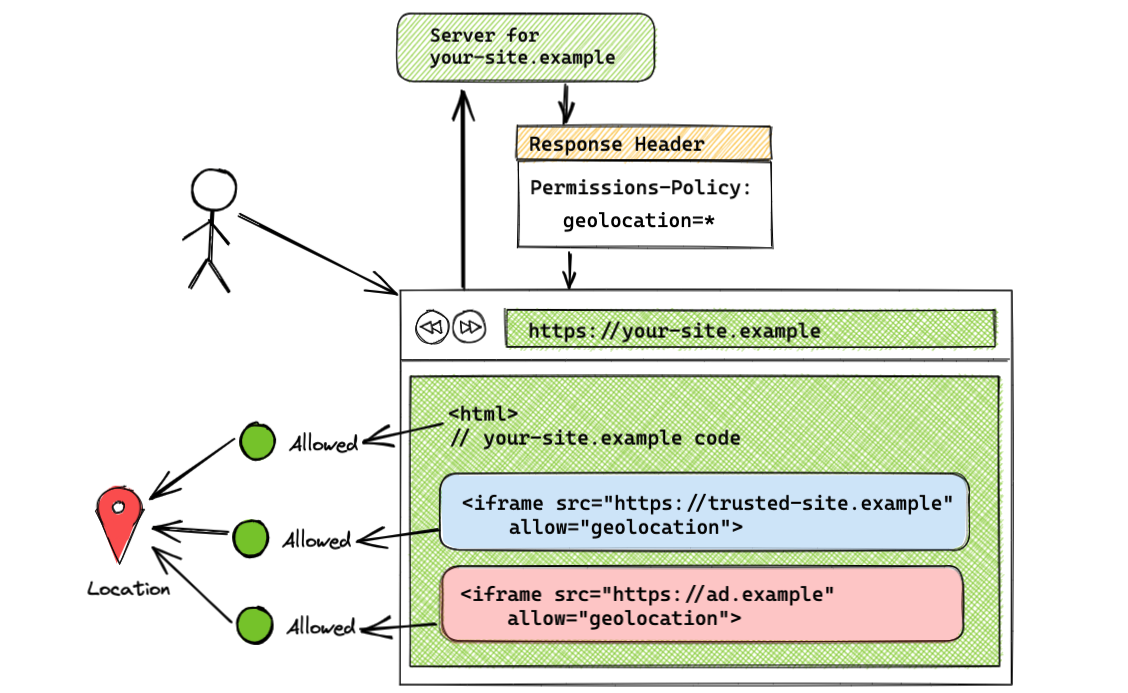 When the origin list is set to the * token, the feature is allowed for all origins present on the page, including itself and all iframes. In this example, all code served from https://your-site.example and the codes served from https://trusted-site.example iframe and https://ad.example have access to the geolocation feature in the user's browser. Remember that the allow attribute must also be set on the iframe itself along with adding the origin to the header origin list.

# Feature allowed on same-origin only 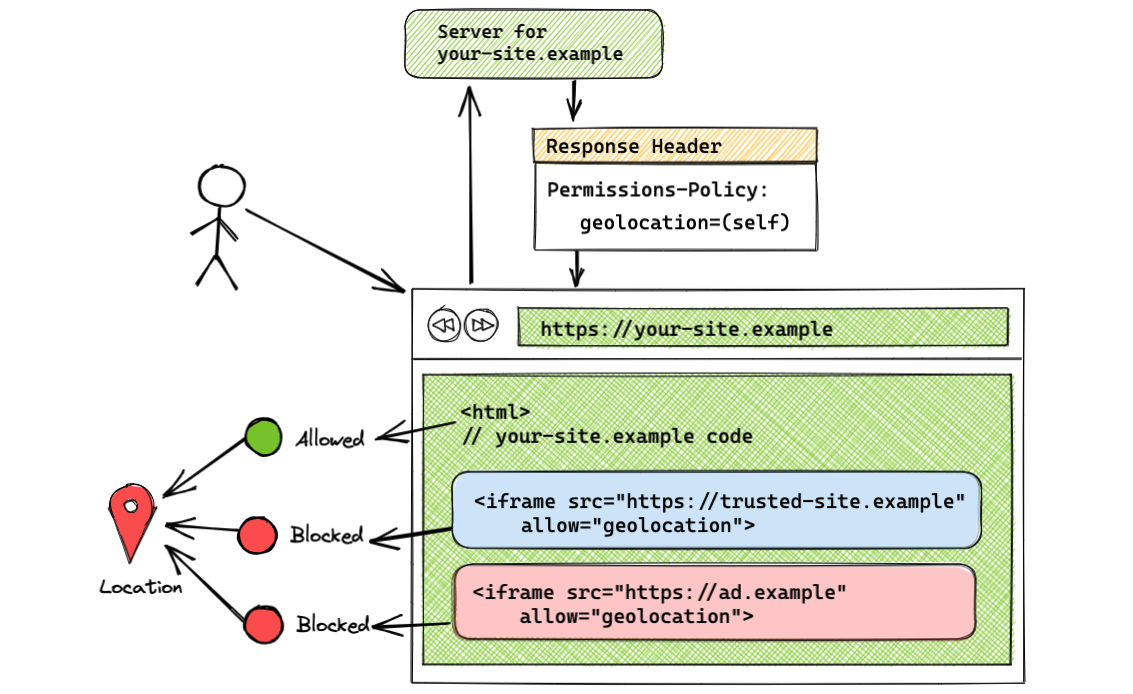 Using the self token allows geolocation usage to the same-origin only. Cross-origins will not have access to the feature. In this example, only https://trusted-site.example (self) will have access to geolocation. Utilize this syntax if you want the feature only for your page and no one else. 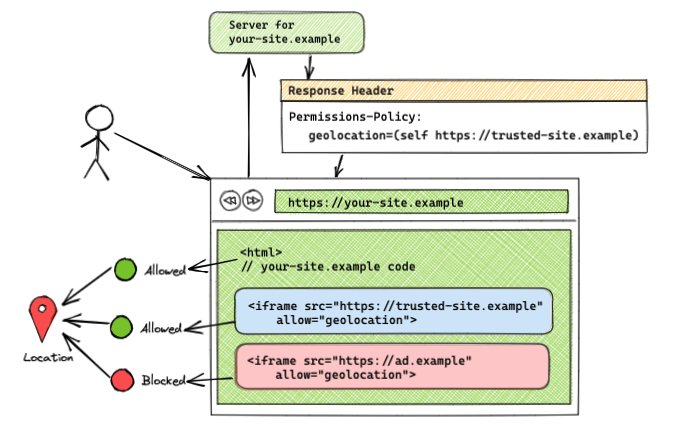 This syntax allows the usage of geolocation to both self (https://your-site.example) and https://trusted-site.example. Remember to explicitly add the allow attribute to the iframe tag. If there is another iframe with <iframe src="https://ad.example” allow="geolocation">, then https://ad.example will not have access to the geolocation feature. Only the original page and https://trusted-site.example that is listed in the origin list along with having the allow attribute in the iframe tag will have access to the user's feature.

# Feature blocked on all origins 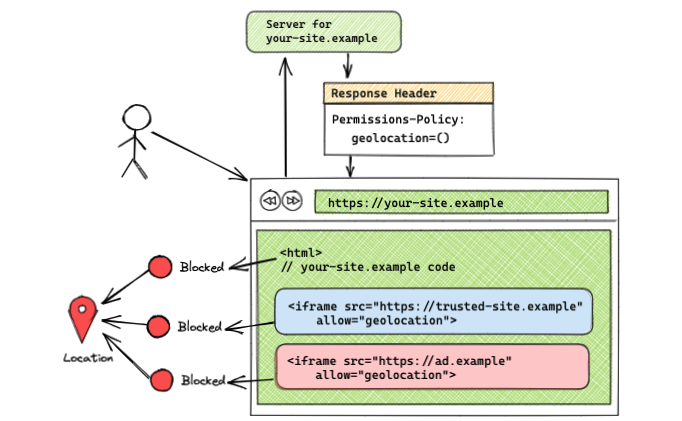 With an empty origin list, the feature is blocked for all origins. This setup can be seen in the demo.

# Use the JavaScript API

The Feature Policy API can be used for policies set by Permissions Policy, with some limitations. There are remaining questions regarding a JavaScript API implementation, and a proposal has been made to move the logic into the Permissions API. Join the discussion if you have any thoughts.

# Check for features in an iframe with the element object 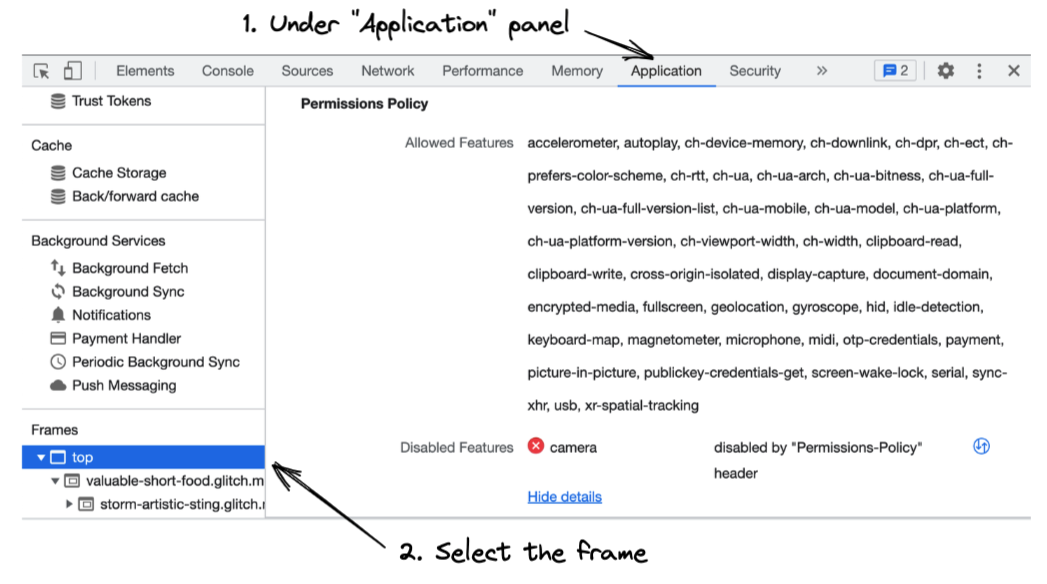 If you are currently using the Feature-Policy header, you can implement the following steps to migrate to Permissions Policy.

To continue using document as the base node, then you must conduct an additional check for the allow attribute on the iframe tag.

Instead of updating the existing code using document, it's recommended to call allowsFeature() on the element object like the previous example.

The Reporting API provides a reporting mechanism for web applications in a consistent manner, and Reporting API for Permissions Policy violations is available as an experimental feature.

If you would like to test the experimental feature, follow the walkthrough and enable the flag in chrome://flags/#enable-experimental-web-platform-features. With the flag enabled, you can observe Permissions Policy violations in DevTools under the Application tab:

The following example shows how the Reporting API header may be constructed:

In the current implementation, you can receive policy violation reports from any violations occurring within that frame by configuring an endpoint named 'default' like the example above. Subframes will require their own reporting configuration.

If you would like to see Permissions Policy support in the Reporting API by default, add your support or comments to the discussion.

For a deeper understanding of Permissions Policy, refer to the following resources: