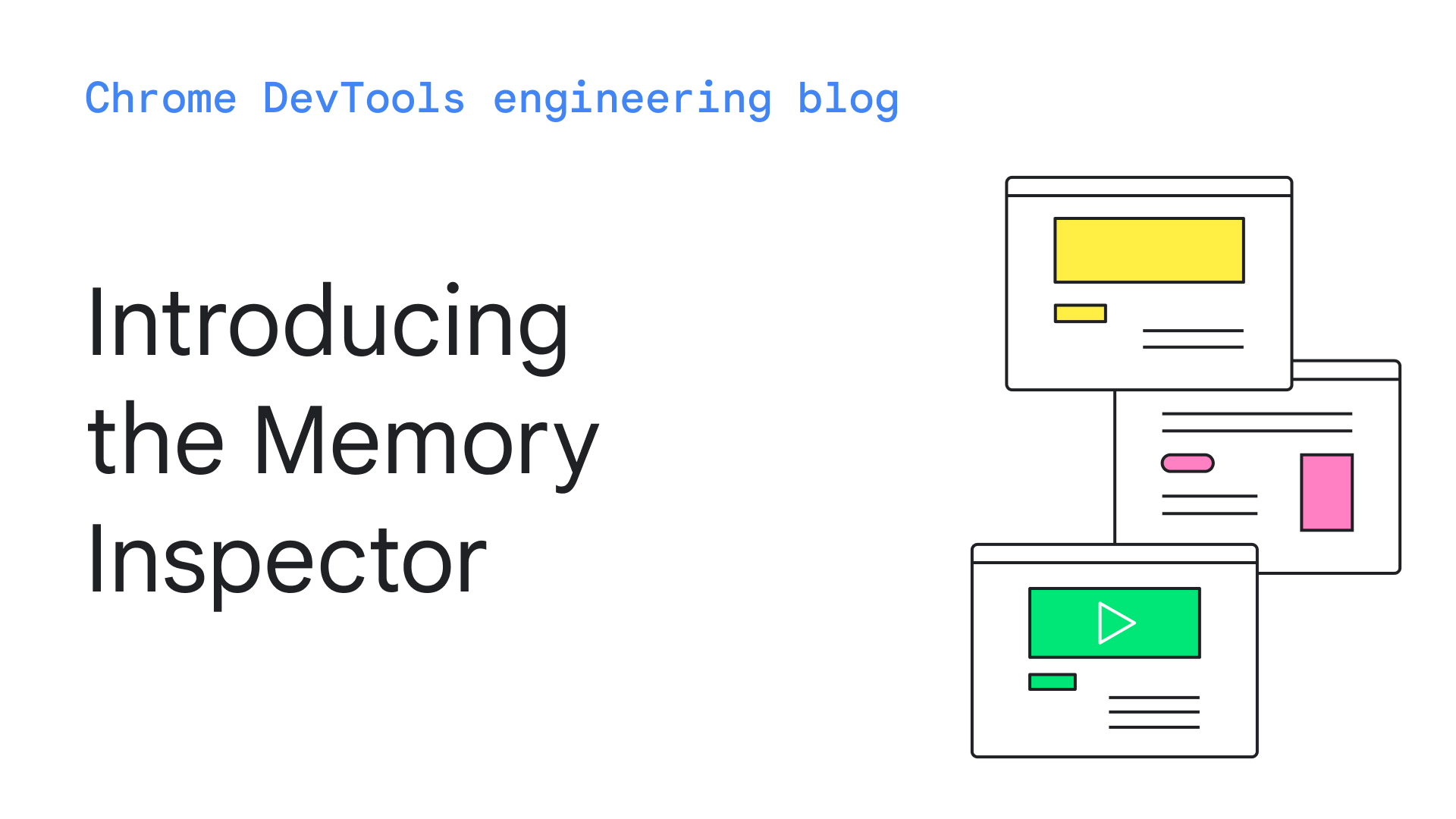 This article introduces the Memory Inspector that has landed in Chrome 91. It allows you to inspect your ArrayBuffer, TypedArray, DataView, and Wasm Memory.

Ever wanted to make sense of the data in your ArrayBuffer? Prior to the Memory Inspector, DevTools only allowed for limited insight into ArrayBuffers. The inspection from the Scope view during a debugging session was limited to viewing a list of single values within the array buffer, which made it difficult to make sense of the data as a whole. As an example, the Scope view shows the buffer as expandable ranges of arrays in below example: 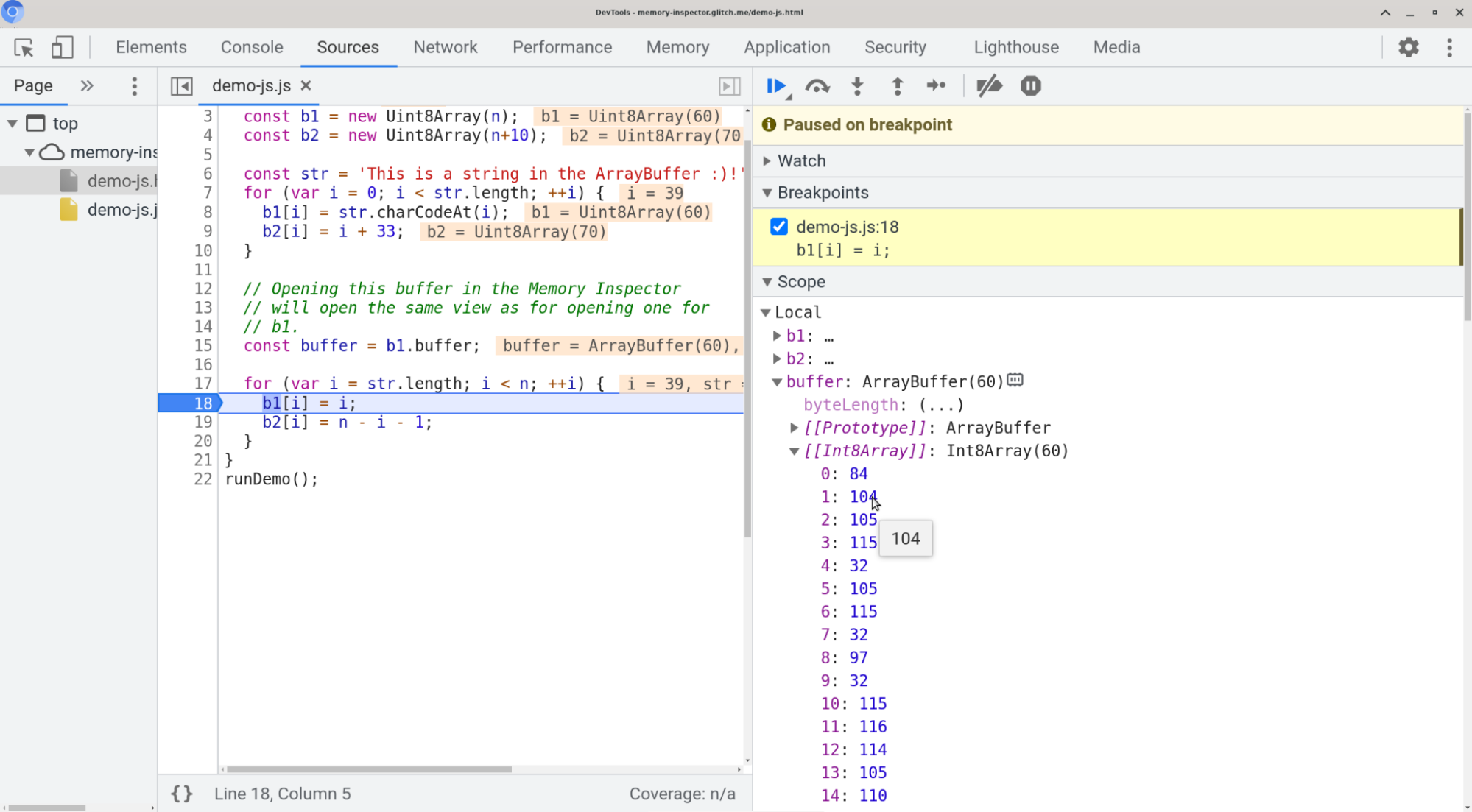 Navigating to a certain range within the buffer was a pain point, requiring the user to scroll down to finally get to that index. But even if navigating to a position would be easy, this way of actually inspecting values are cumbersome: it is difficult to tell what these numbers mean. Especially, what if they should not be interpreted as single bytes, but e.g. as 32-bit Integers? 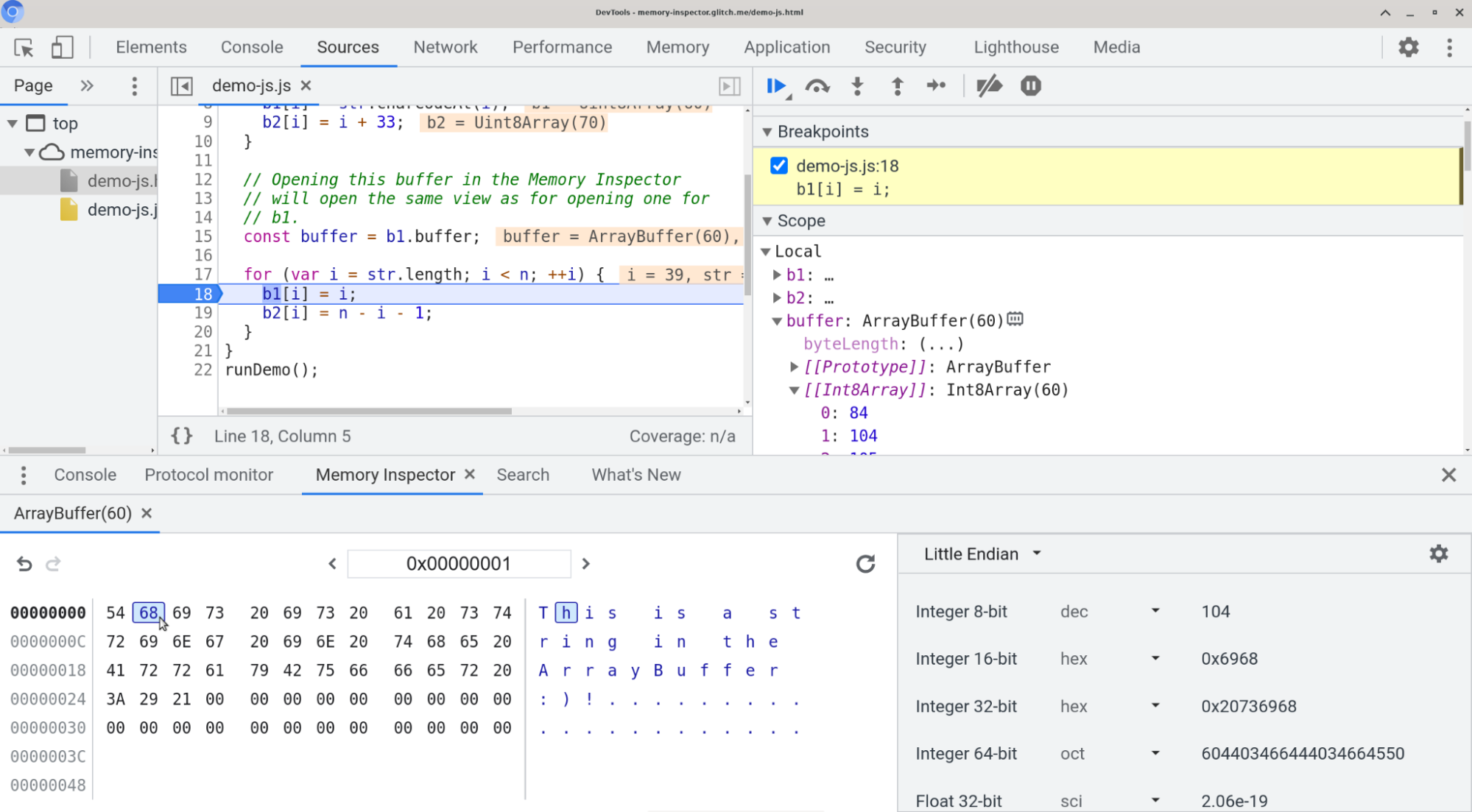 With Chrome 91 we are introducing the Memory Inspector, a tool to inspect array buffers. You might have previously seen memory inspection tools to view binary data, which show the binary content in a grid along with their addresses, and which offer different ways of interpreting the underlying values. This is what the Memory Inspector is bringing to you. With the Memory Inspector you can now view the content, navigate it, and select types to be used to interpret the values at hand. It shows the ASCII values directly next to the bytes, and it allows the user to select different endianness. See the Memory Inspector in action below:

Want to try it out? To learn how to open the Memory Inspector and view your array buffer (or TypedArray, DataView, or Wasm Memory) and more information on how to use it, head over to our documentation on the Memory Inspector. Give it a try on these toy examples (for JS, Wasm, and C++). 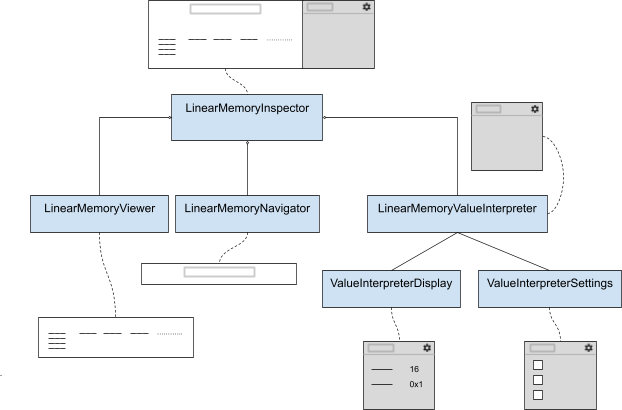 The LinearMemoryInspector component is the parent component that combines the subcomponents that build up all elements in the Memory Inspector. It basically takes a Uint8Array and an address, and on each change of either it propagates the data to its children, which triggers a re-render. The LinearMemoryInspector itself renders three subcomponents:

Each of the components is designed to only represent one small component of the UI, such that components could be reused if needed. Whenever new data is set on a component, a re-rendering is triggered, which shows the reflected change on the data that is set on the component. One example for a workflow with our components is shown below, where the user is changing the address in the address bar, which triggers an update by setting the new data, in this case the address to view: 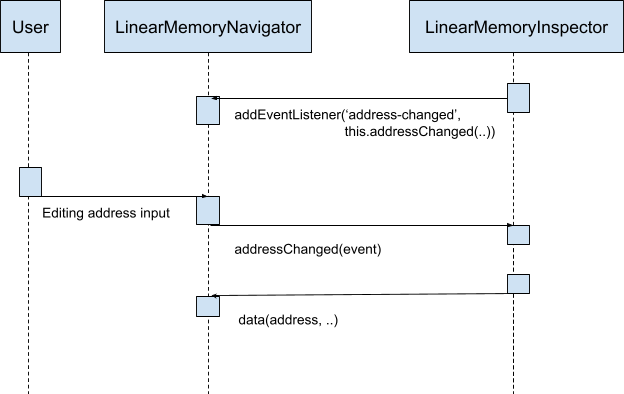 So in order to ensure that the speed and the memory consumption of the Memory Inspector is independent of the actual buffer that we show, we let the LinearMemoryInspector component only keep a subrange of the original buffer.

For this to work, the LinearMemoryInspector first needs to take two more arguments: a memoryOffset and an outerMemoryLength. The memoryOffset indicates the offset, at which the passed Uint8Array starts, and is required to render the correct data addresses. The outerMemoryLength is the length of the original buffer, and is required to understand what range we can show:

With this information we can ensure that we can still render the same view as before (the content around the address), without actually having all the data in place. So what to do if a different address is requested, which falls into a different range? In that case, the LinearMemoryInspector triggers a RequestMemoryEvent, which updates the current range that is kept; an example is shown below:

In this example, the user navigates the memory page (the Memory Inspector is using paging for showing chunks of data), which triggers a PageNavigationEvent, which itself triggers a RequestMemoryEvent. That event kicks off fetching the new range, which is then propagated to the LinearMemoryInspector component through setting the data. As a result, we show the newly fetched data.

# Oh, and did you know? You can even inspect memory in Wasm and C/C++ code

The Memory Inspector is not only available for ArrayBuffers in JavaScript, but can also be used for inspecting Wasm Memory and memory pointed to by C/C++ references/pointers (using our DWARF-extension - give it a try if you haven’t yet! See Debugging WebAssembly with modern tools here. A small outlook on the Memory Inspector in action for native debugging of C++ on the web: 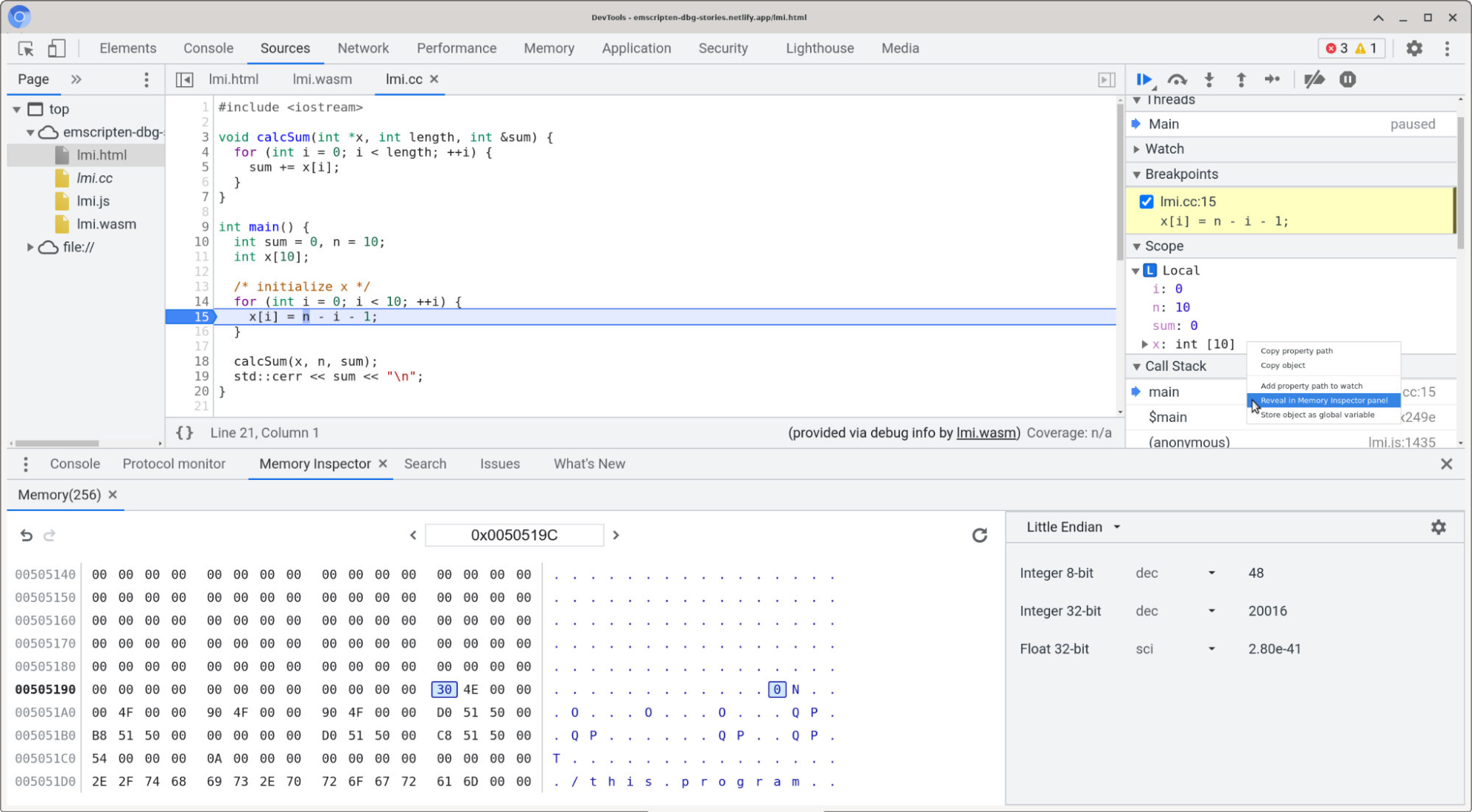