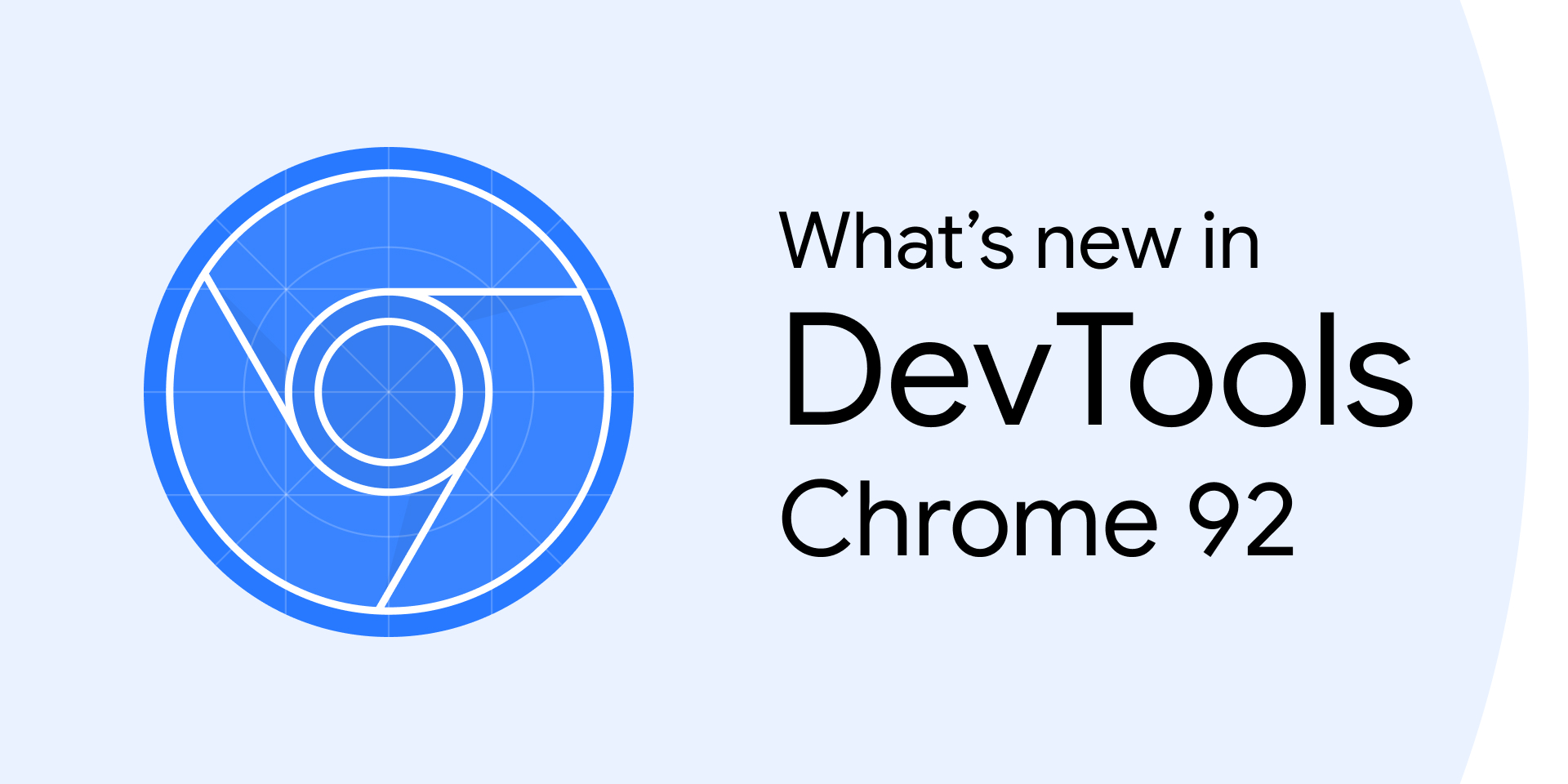 A highly requested feature. You can now preview and author CSS Grid with the new CSS Grid editor! 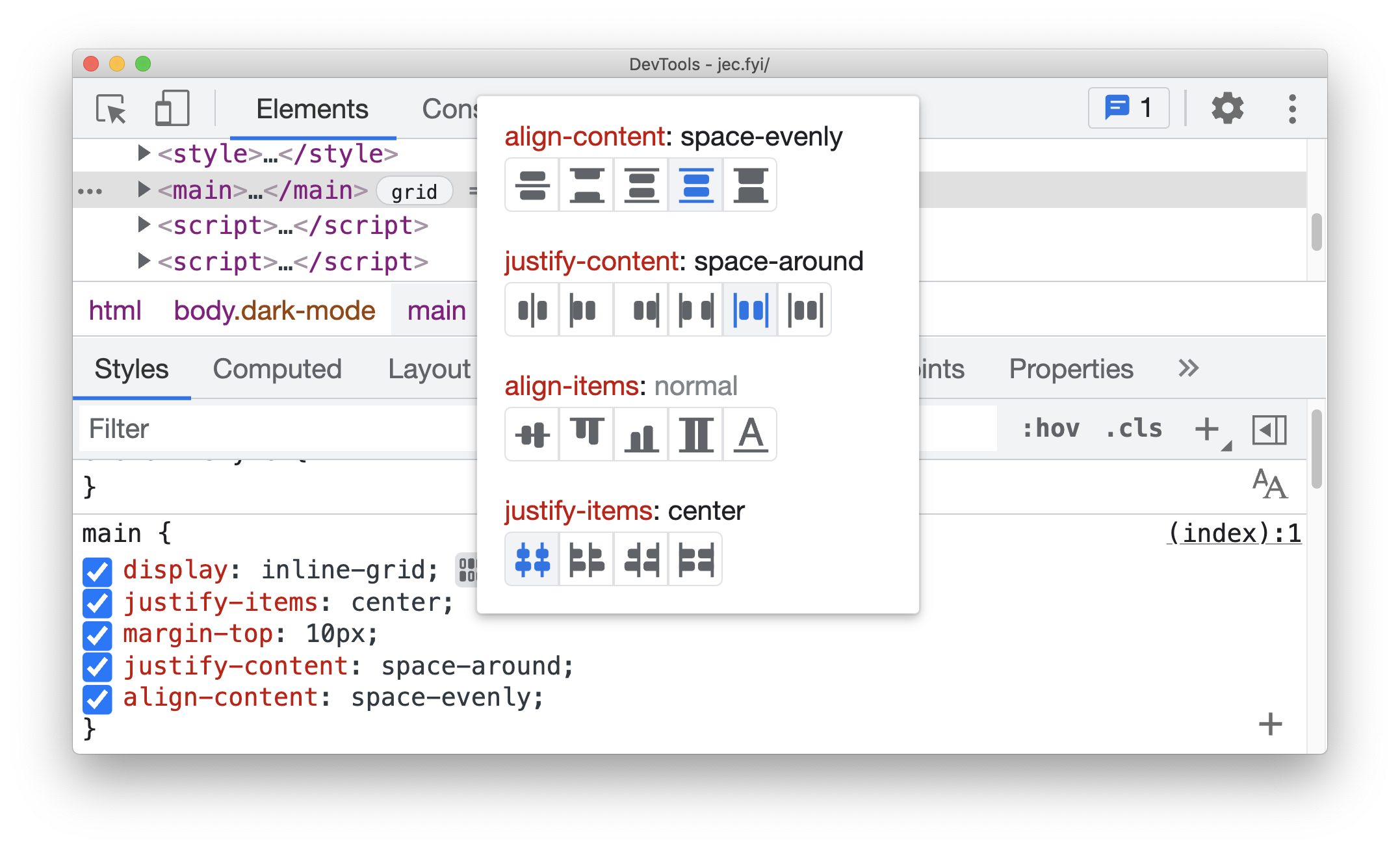 When an HTML element on your page has display: grid or display: inline-grid applied to it, you can see an icon appear next to it in the Styles pane. Click the icon to toggle the CSS grid editor. Here you can preview the potential changes with the on screen icons (e.g. justify-content: space-around) and author the grid appearance with just one click.

# Support for const redeclarations in the Console

The Console now supports redeclaration of const statement, in addition to the existing let and class redeclarations. The inability to redeclare was a common annoyance for web developers who use the Console to experiment with new JavaScript code.

This allows developers to copy-paste code into the DevTools console to see how it works or experiment, make small changes to the code, and repeat the process without refreshing the page. Previously, DevTools threw a syntax error if the code redeclared a const binding.

Refer to the example below. const redeclaration is supported across separate REPL scripts (refer to variable a). Take note that the following scenarios are not supported by design: 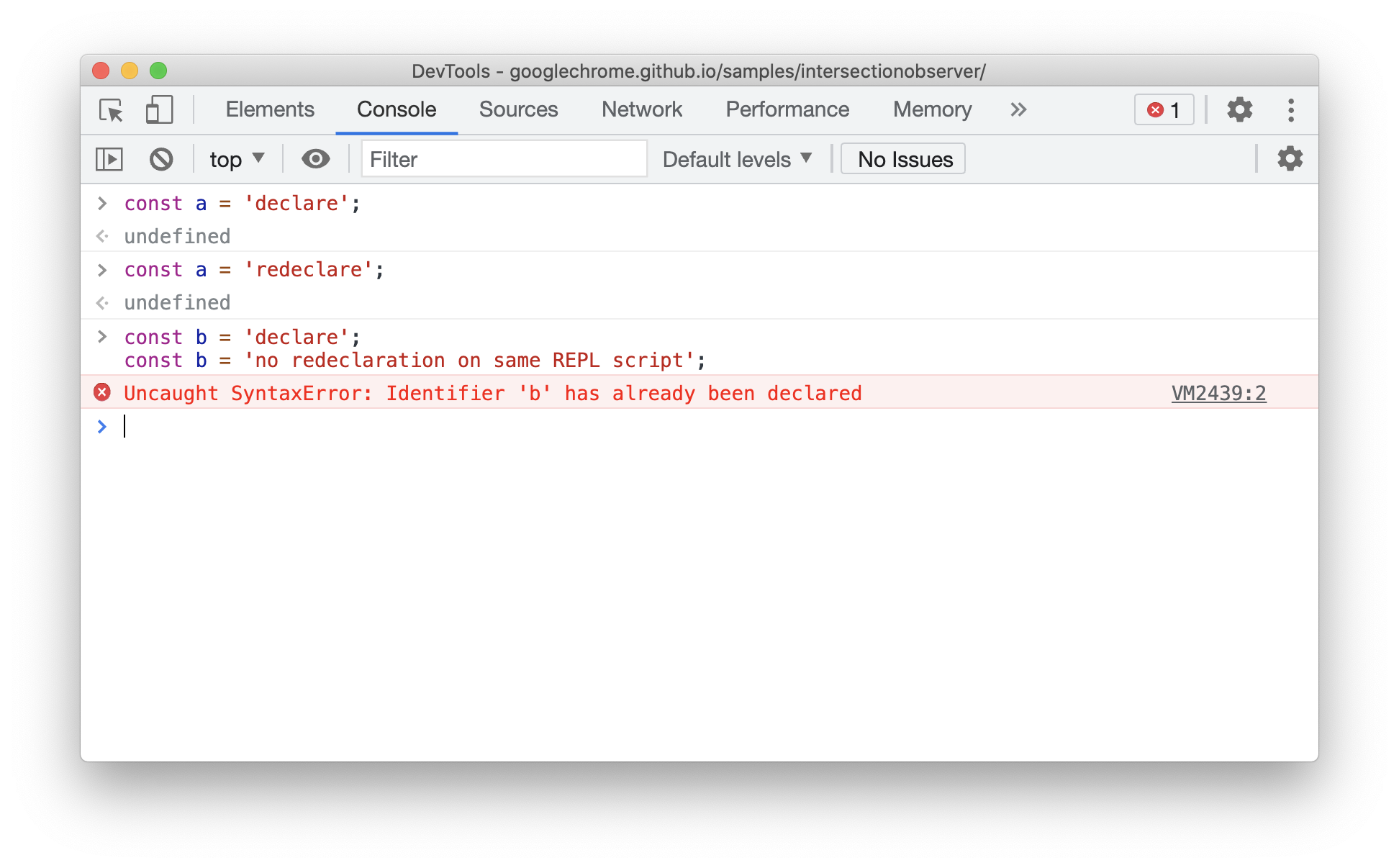 You can now view the order of source elements on screen for better accessibility inspection. 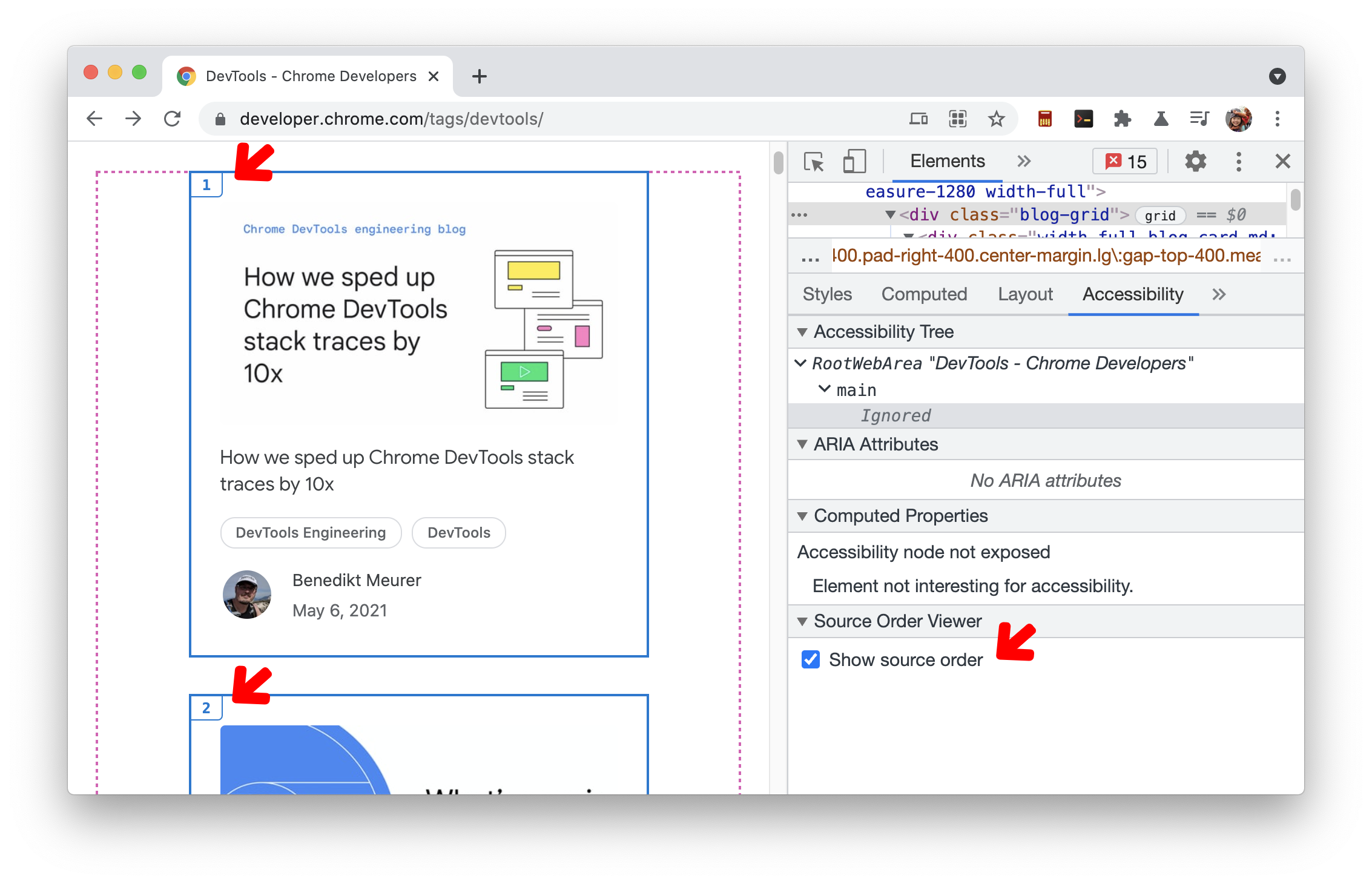 The order of content in an HTML document is important for search engine optimization and accessibility. The newer CSS features allow developers to create content that looks very different in its on-screen order than what is in the HTML document. This is a big accessibility problem as screen reader users would get a different, most likely confusing experience than sighted users.

View iframe details by right clicking on the iframe element in the Elements panel, and select Show frame details. 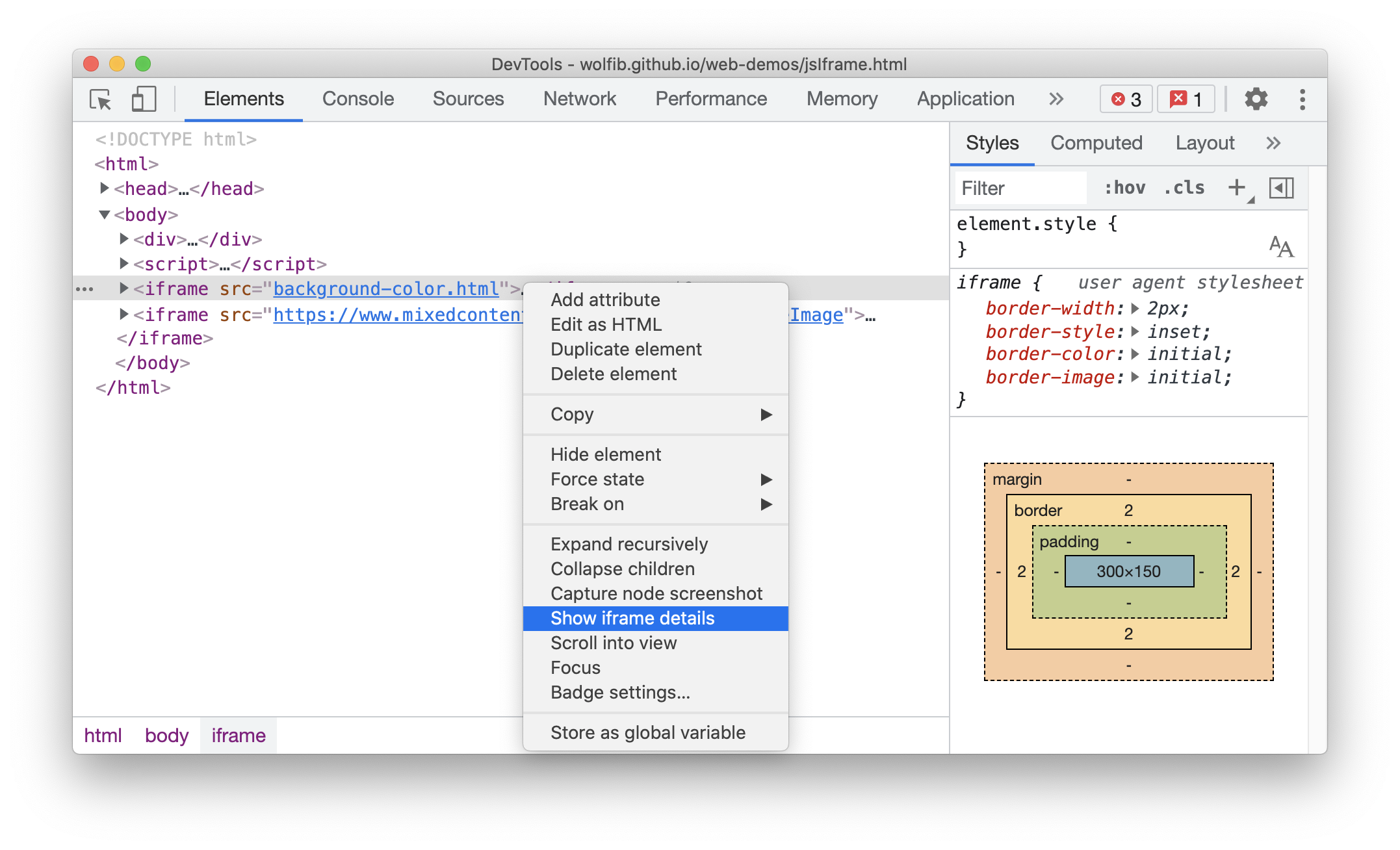 This takes you to a view of the iframe's details in the Application panel where you can examine document details, security & isolation status, permissions policy, and more to debug potential issues. 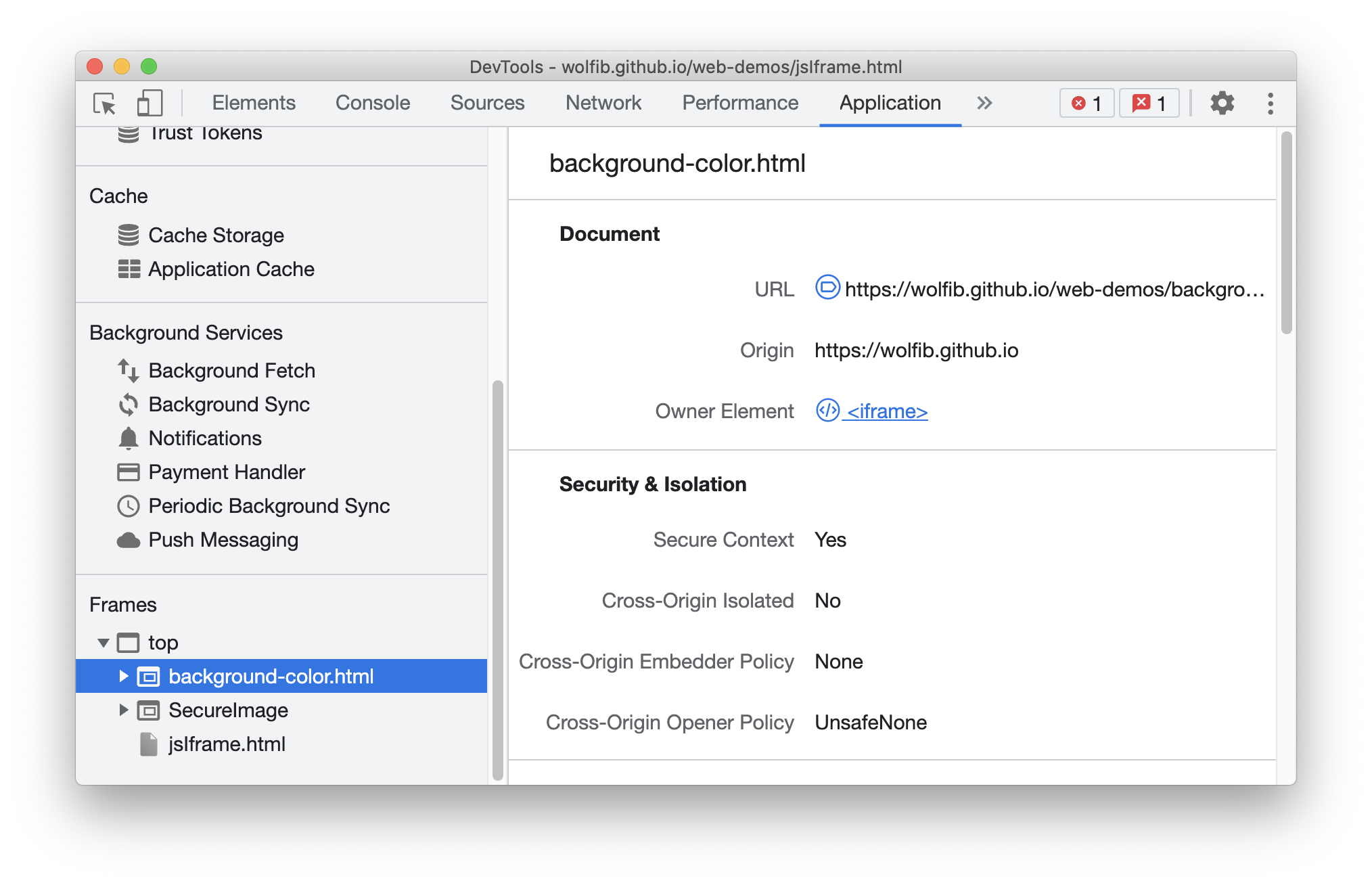 Cross-origin resource sharing (CORS) errors are now surfaced in the Issues tab. There are various reasons causing CORS errors. Click to expand each issue to understand the potential causes and solutions. 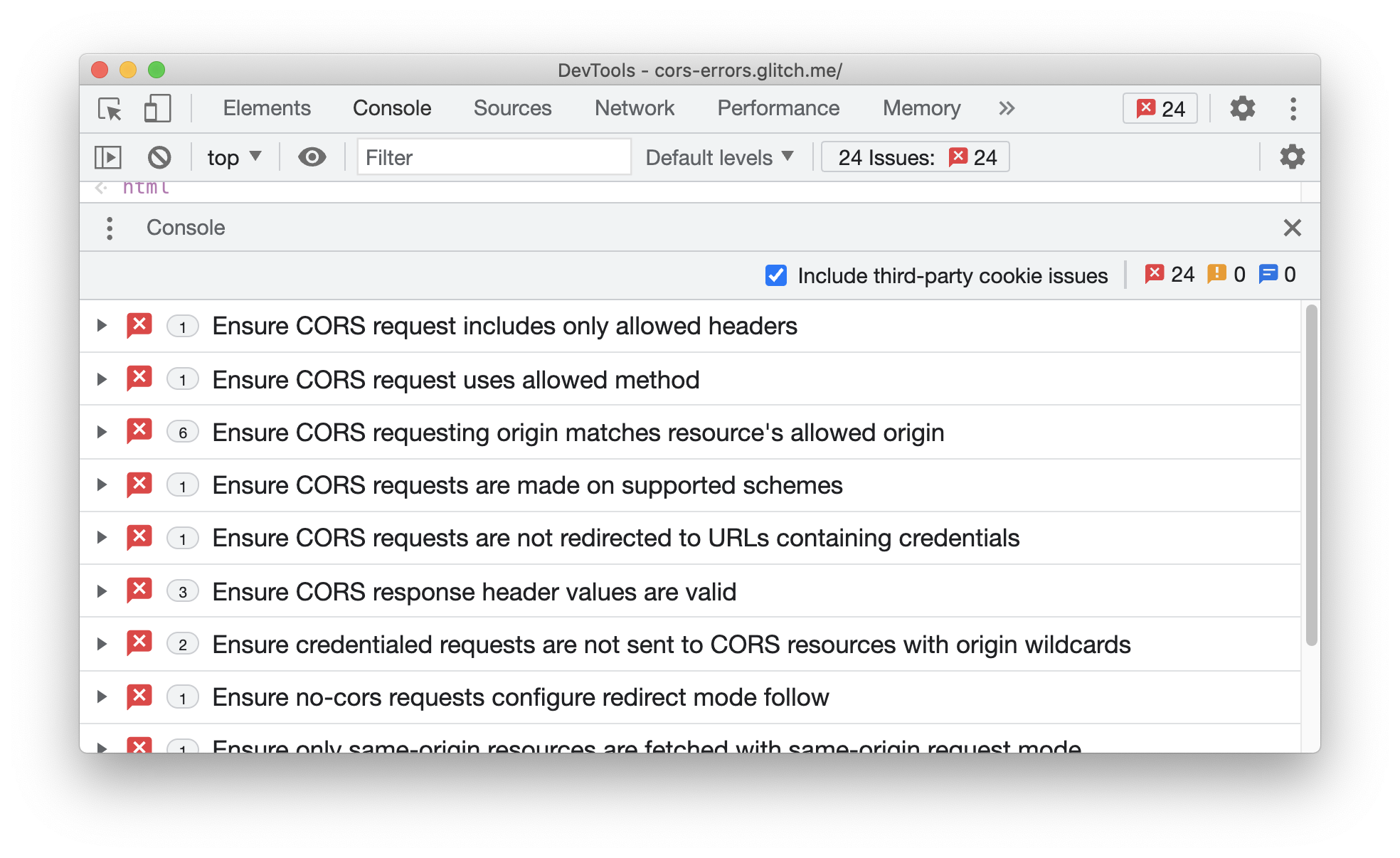 The XHR label is now renamed to Fetch/XHR. This change makes it clearer that this filter includes both XMLHttpRequest and Fetch API network requests. 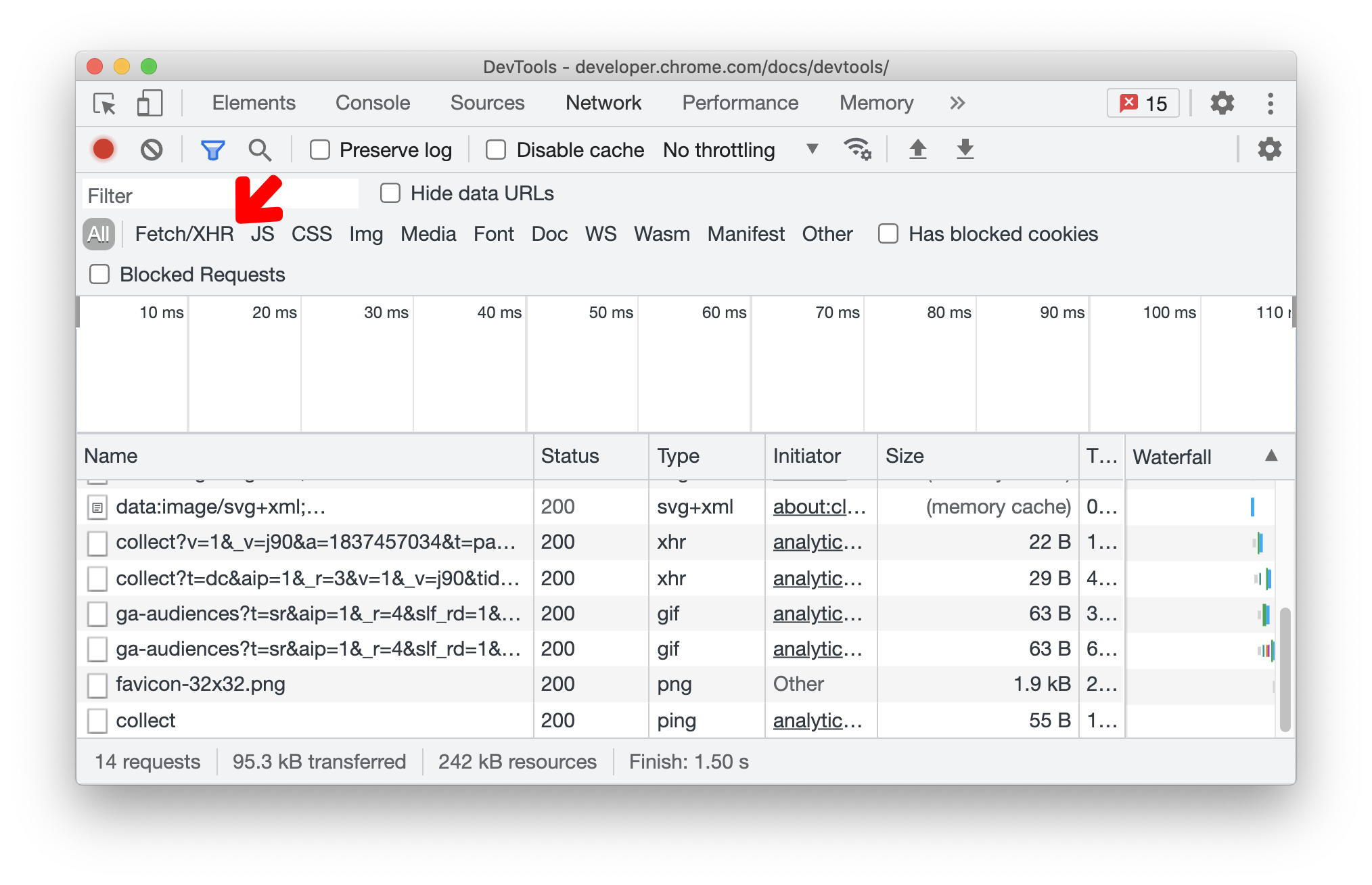 You can now click on the new Wasm button to filter the Wasm network requests. 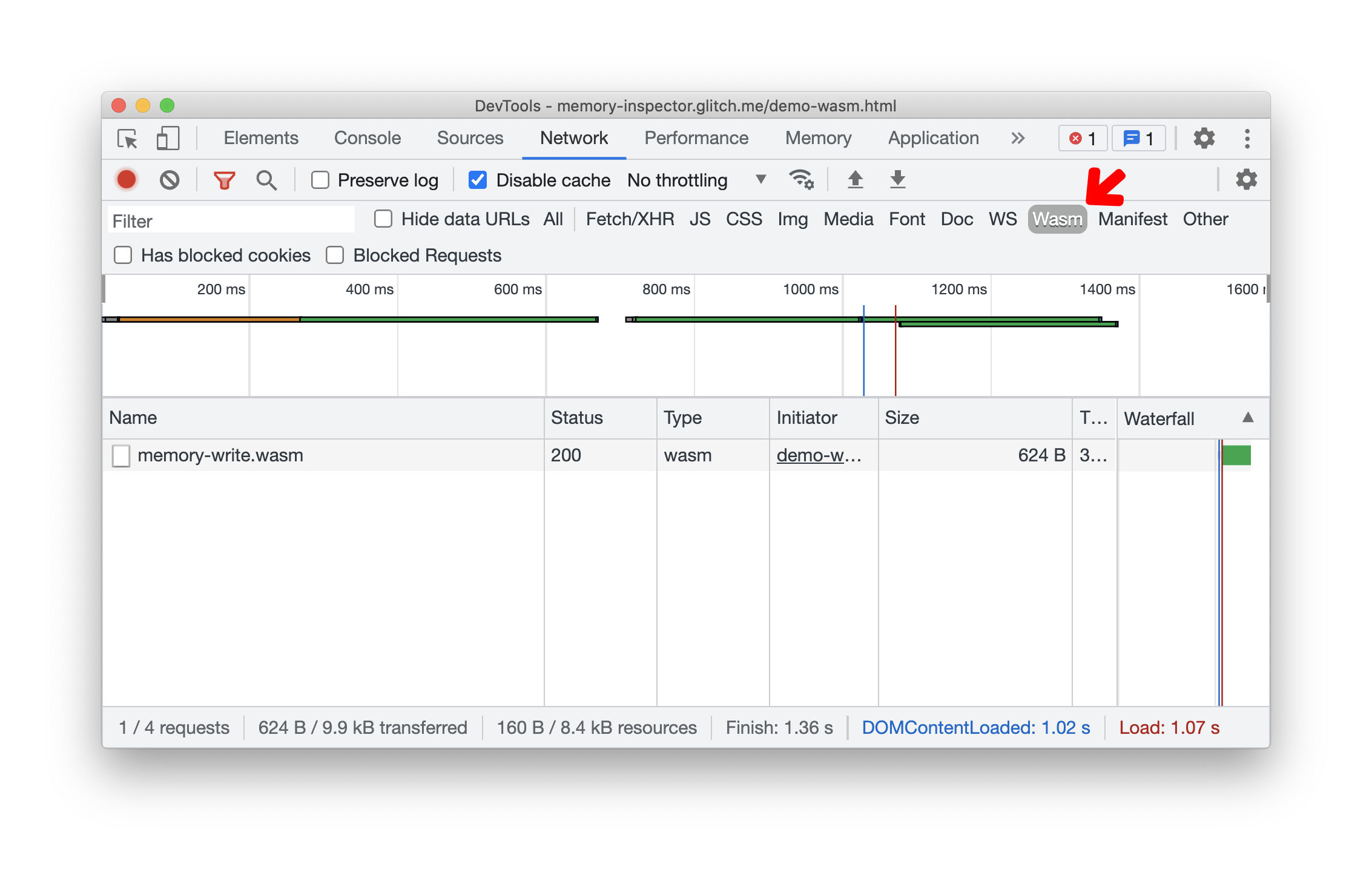 # User-Agent Client Hints for devices in the Network conditions tab

User-Agent Client Hints are a new expansion to the Client Hints API, that enables developers to access information about a user's browser in a privacy-preserving and ergonomic way. 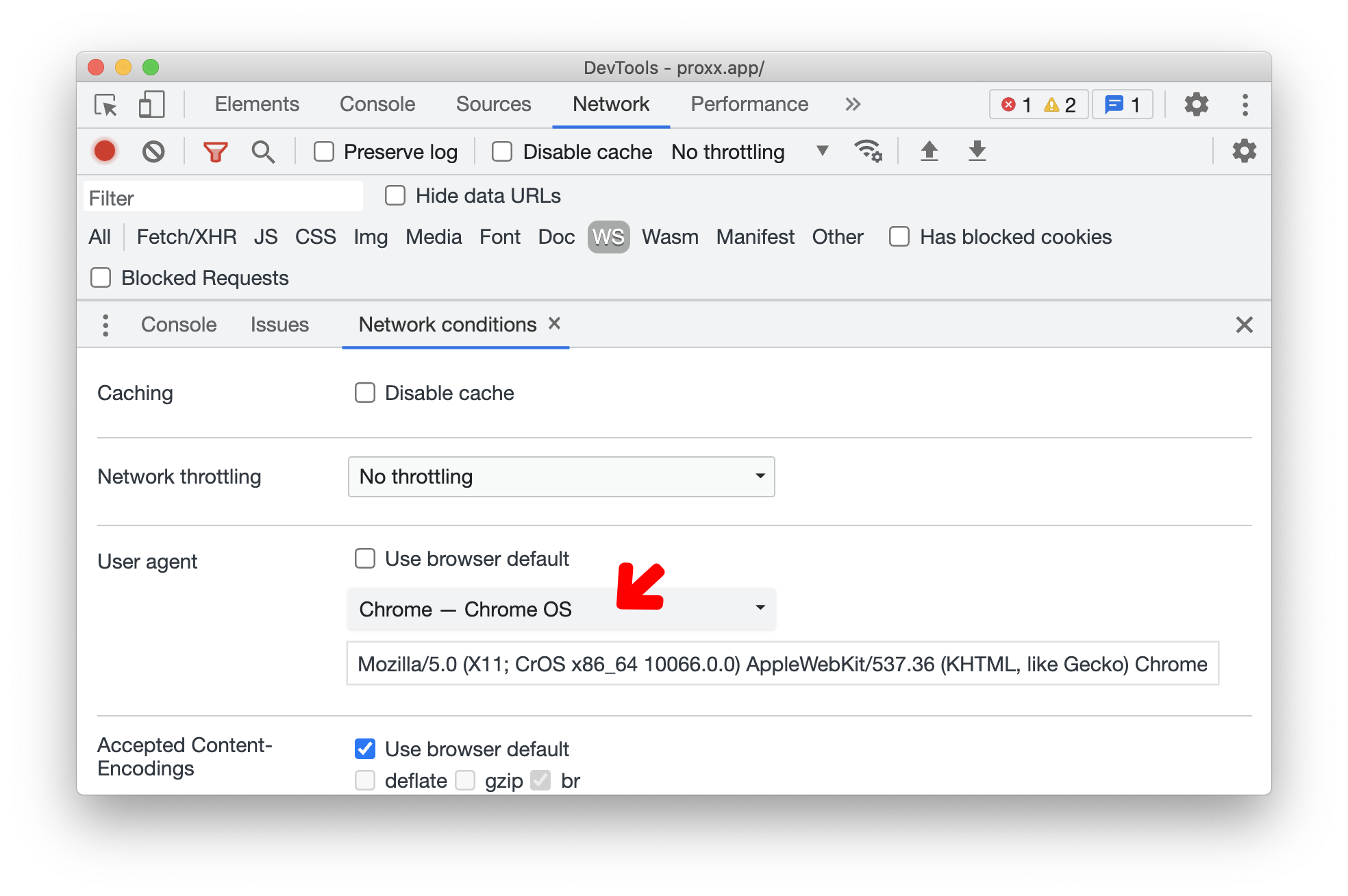 Quirks Mode and Limited-quirks Mode are legacy browser modes from before the web standards were made. These modes emulate pre-standard-era layout behaviors that often cause unexpected visual effects.

When debugging layout issues, developers might think they are caused by user-authored CSS or HTML bugs, while the real problem is the Compat Mode the page is in. DevTools provides suggestions for fixing it. 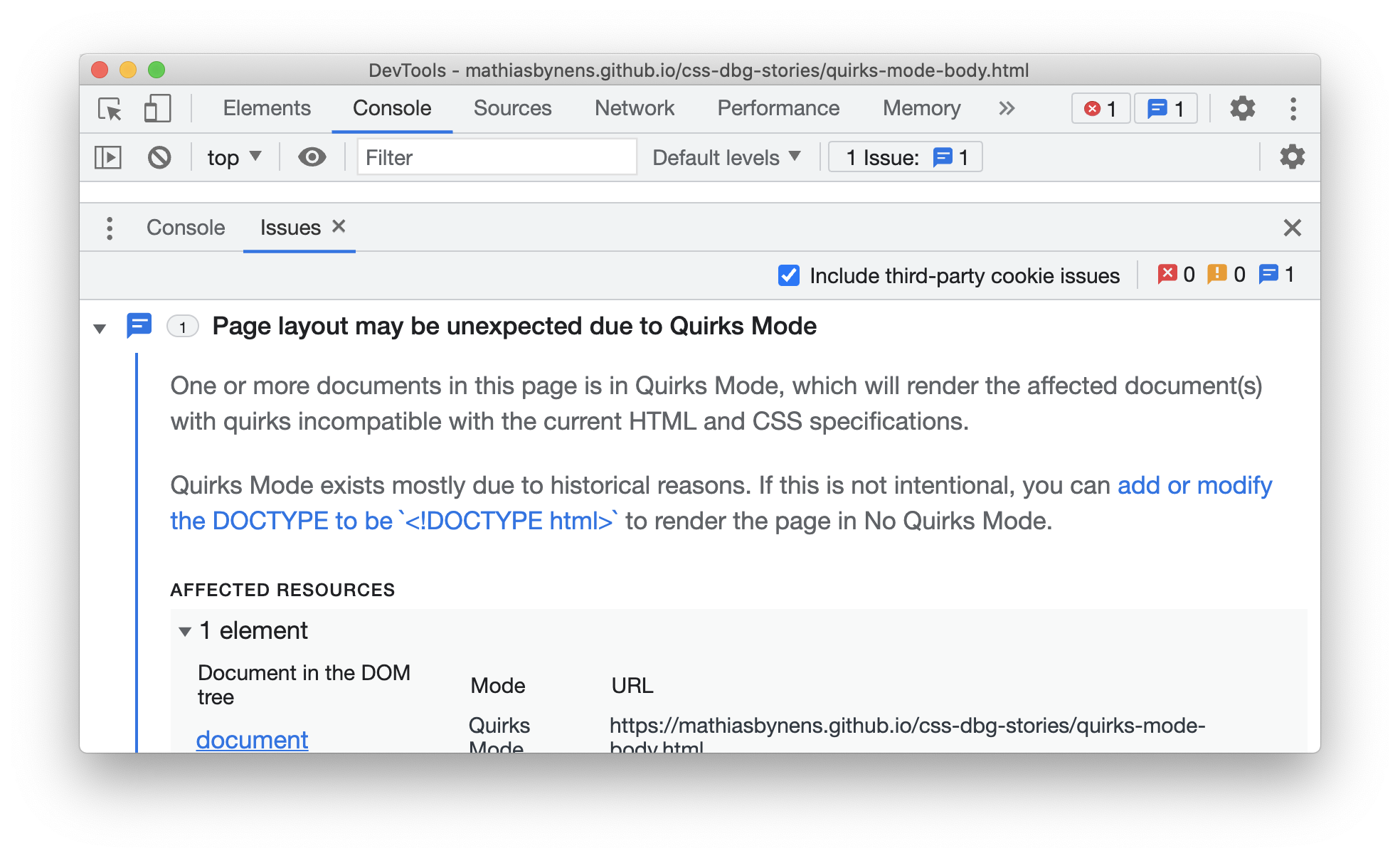 # Include Compute Intersections in the Performance panel

DevTools now show the Compute Intersections in the flame chart. These changes help you to identify the intersection observers events and debug on its potential performance overheads. 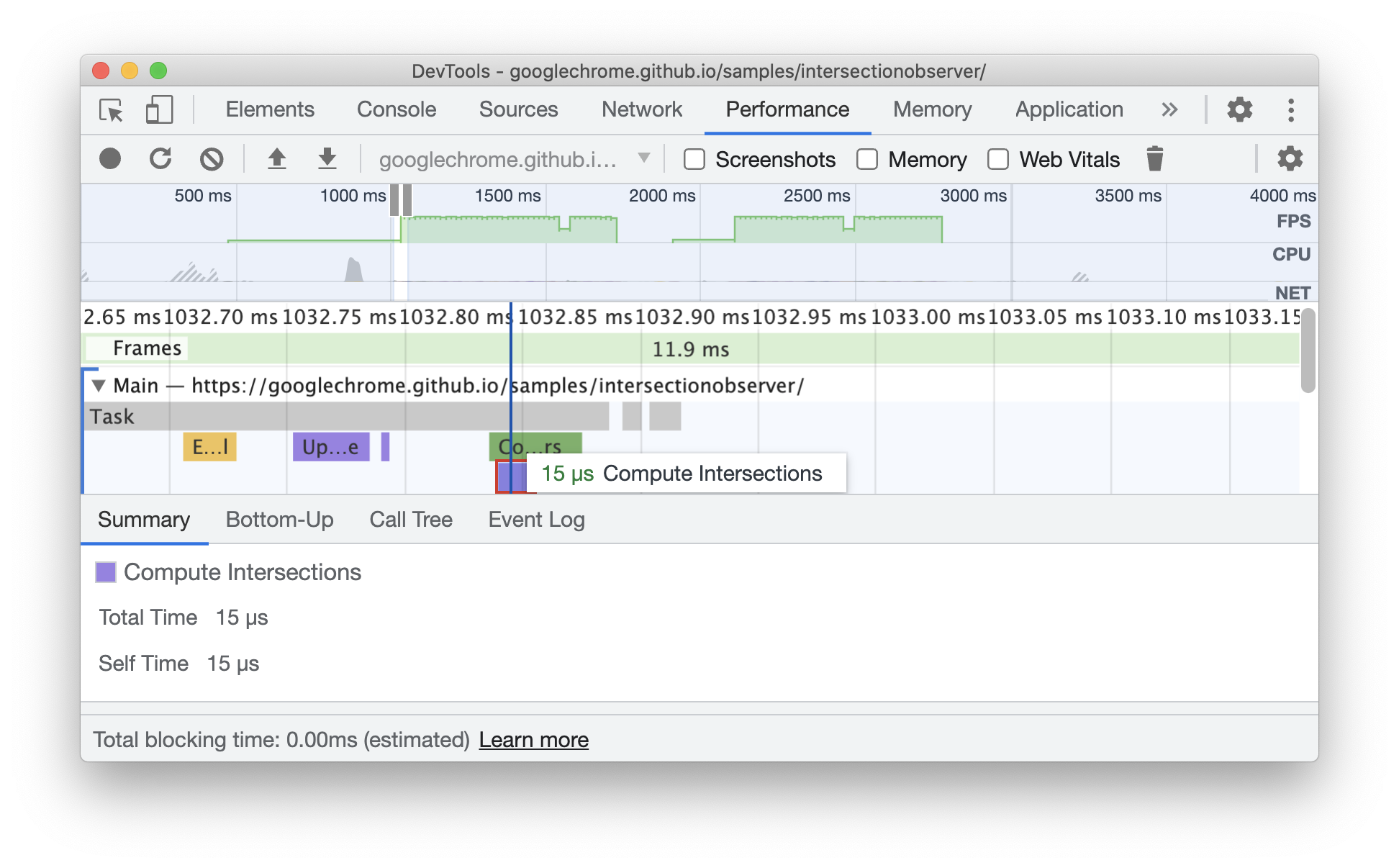 Check out the release notes for a full list of changes.

The Restart frame option is now deprecated. This feature requires further development to work well, it is currently broken and often crashes. 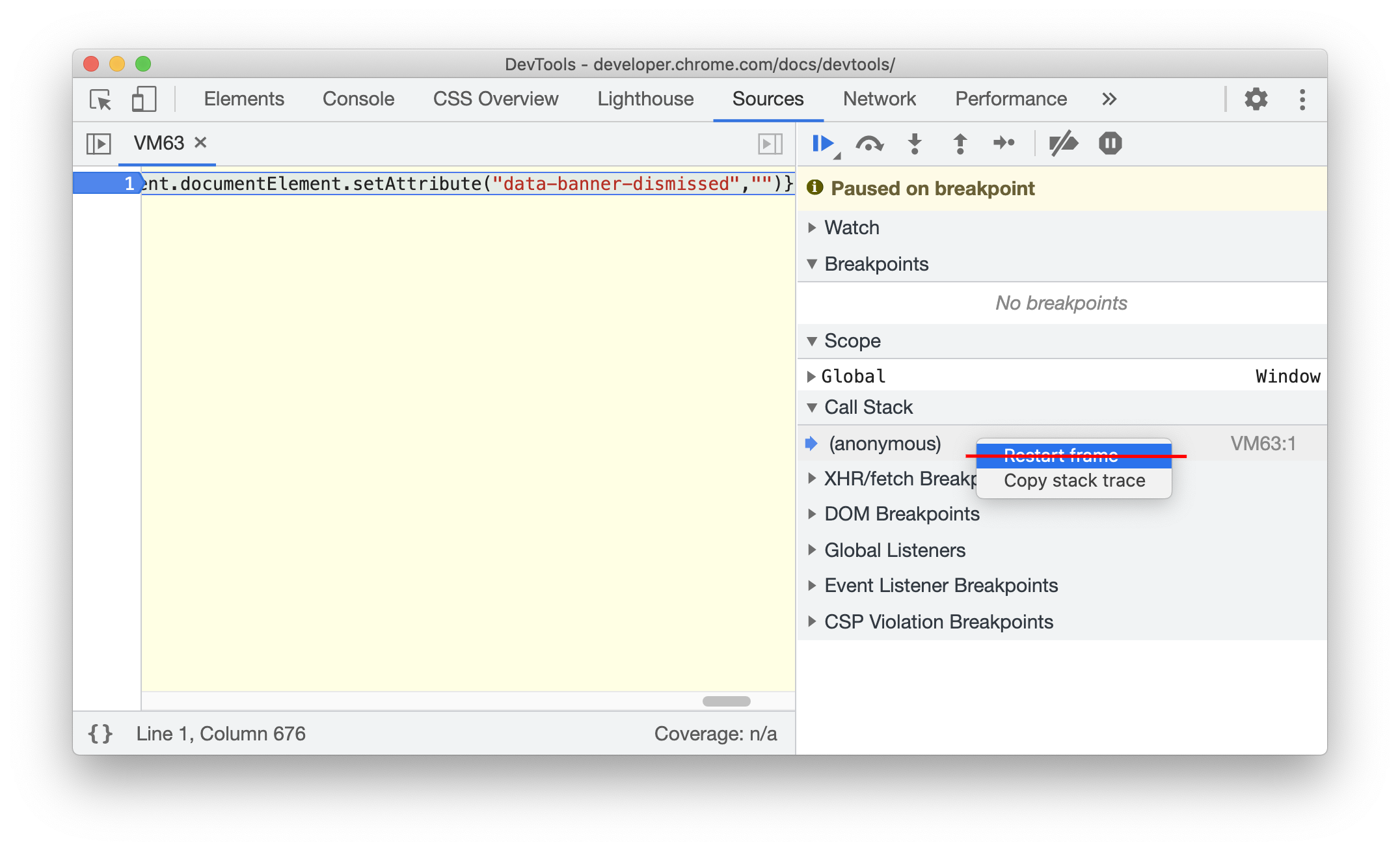 To enable the experiment, check the Protocol Monitor checkbox under Settings > Experiments.

Chrome DevTools uses the Chrome DevTools Protocol (CDP) to instrument, inspect, debug and profile Chrome browsers. The Protocol monitor provides you a way to view all the CDP requests and responses made by DevTools.

Two new functions added to facilitate the testing of CDP: 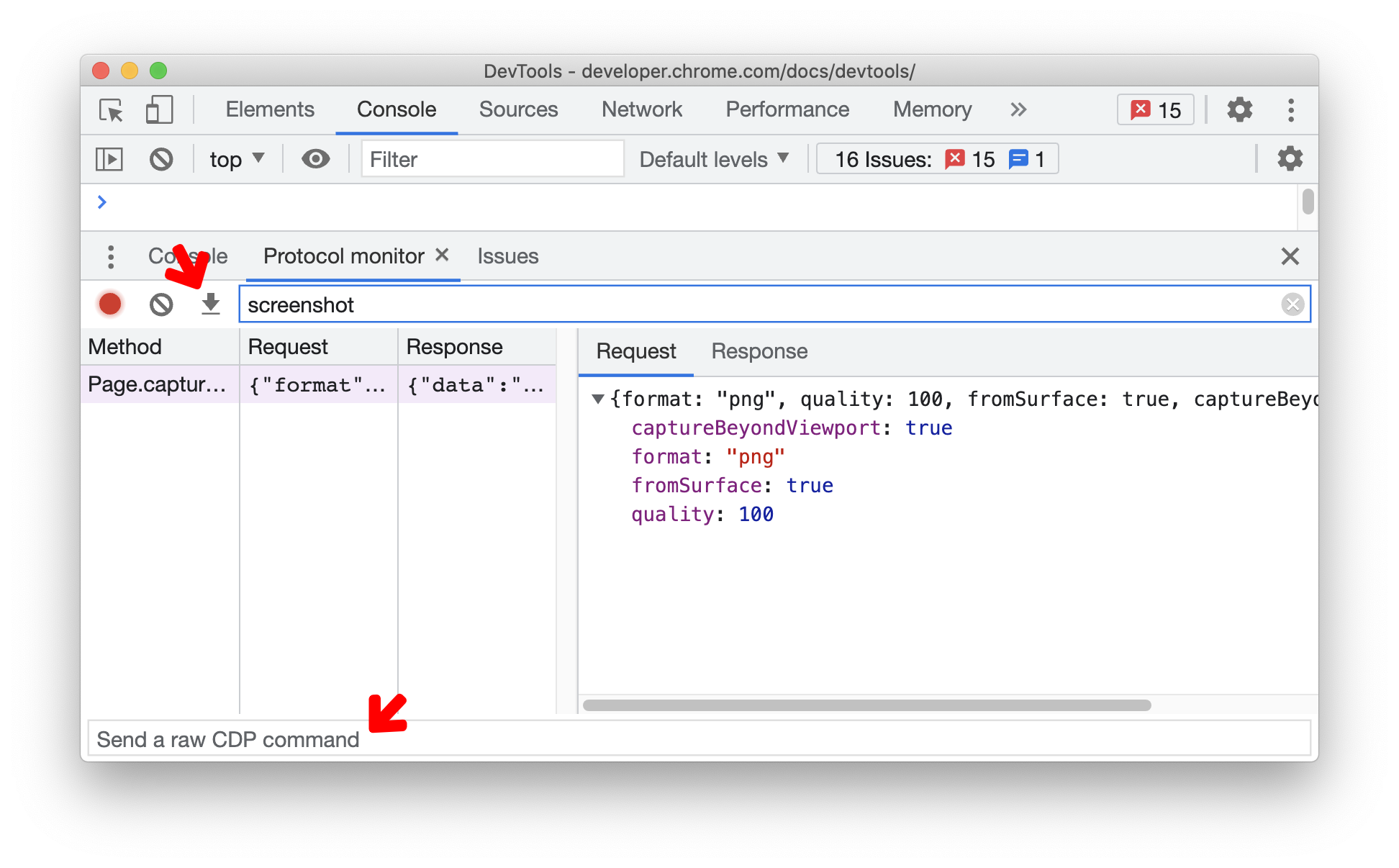 To enable the experiment, check the Recorder checkbox under Settings > Experiments.

The Puppeteer recorder now generates a list of steps based on your interaction with the browser, whereas previously DevTools generated a Puppeteer script directly instead. A new Export button is added to allow you export the steps as a Puppeteer script.

After recording the steps, you can use the new Replay button to replay the steps. Follow the instructions here to learn how to get started with recording.

Please note that this is an early-stage experiment. We plan to improve and expand the Recorder functionality over time. 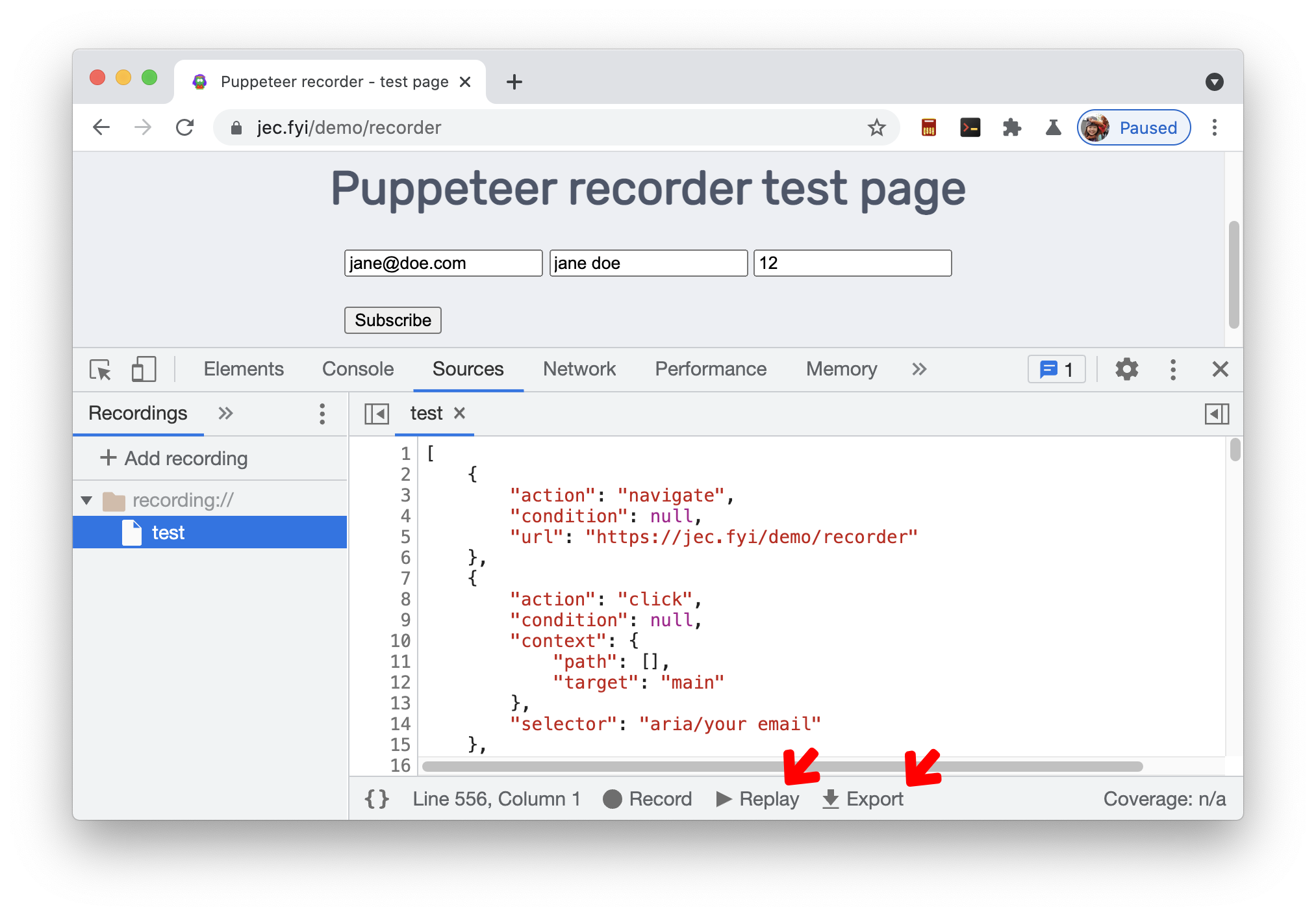