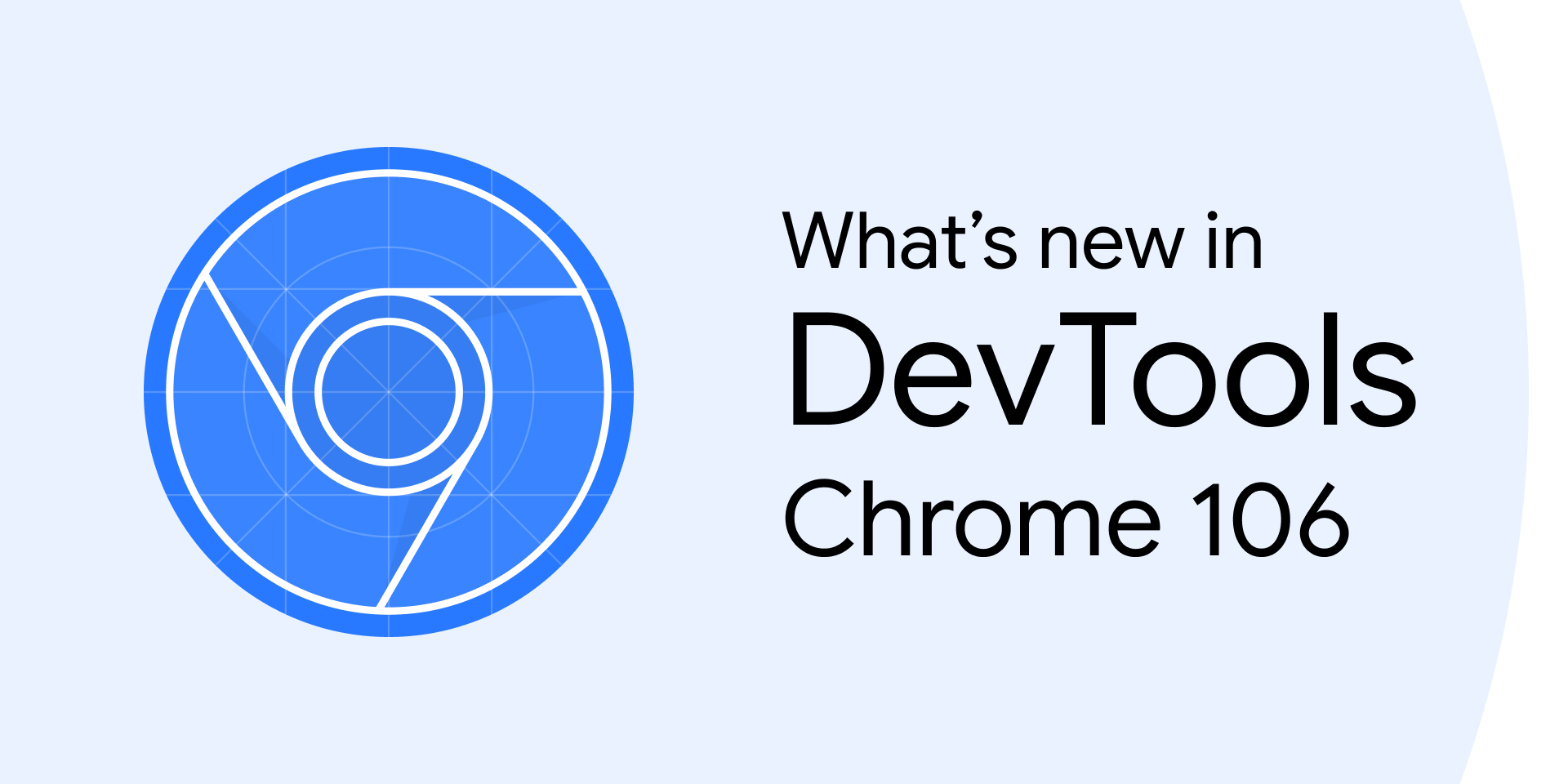 The Group files by Authored / Deployed is now shown under the 3-dot menu. Previously, it showed directly on the navigation pane.

Open this demo. Enable the Group files by Authored / Deployed setting to view your original source code (Authored) first and navigate to them quicker. 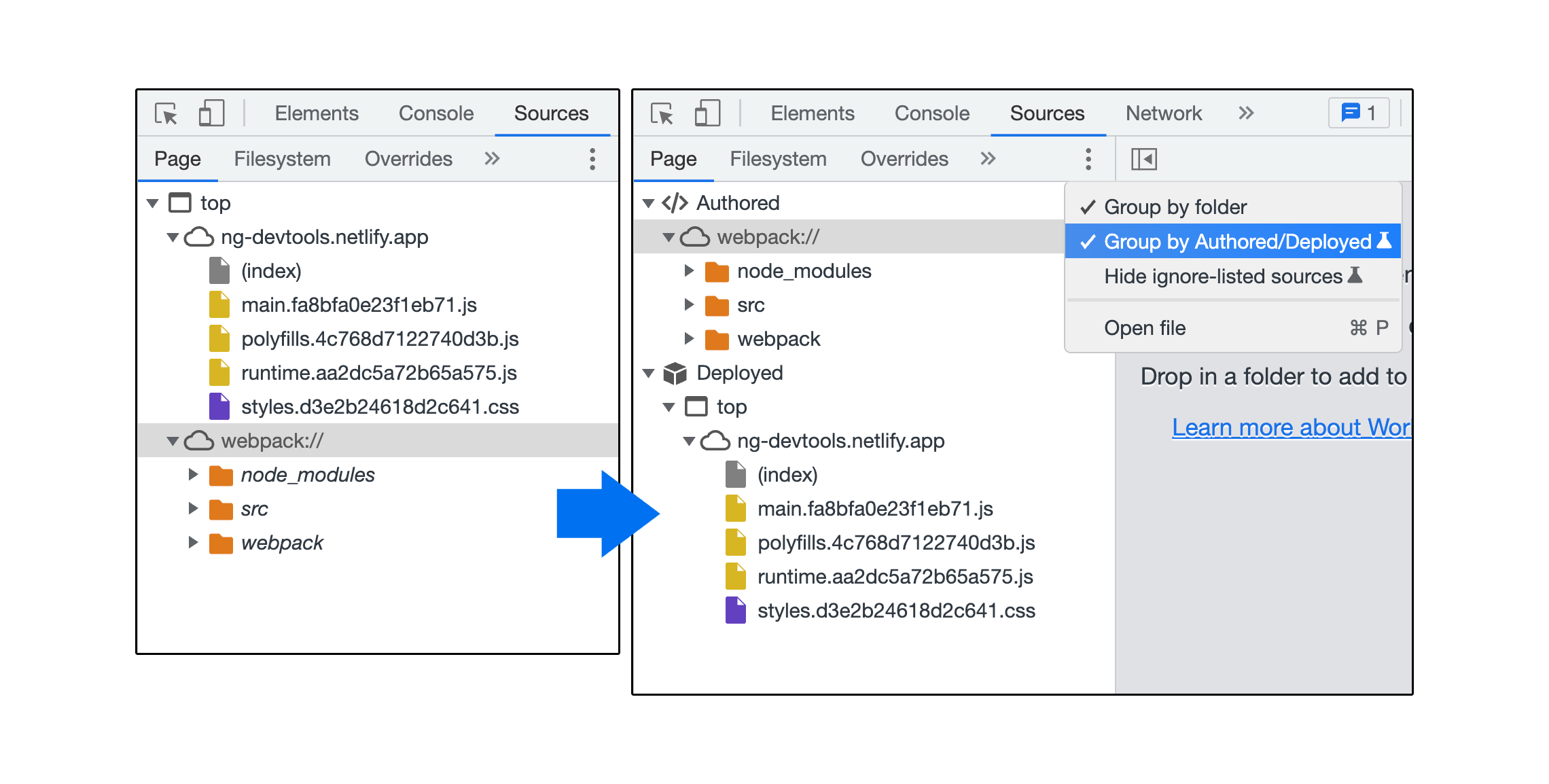 When some operations are scheduled to happen asynchronously, the stack traces in DevTools now tell the “full story” of the operation. Previously, it tells only part of the story.

For example, open this demo and click on the increment button. Expand the error message in Console. In our source code, the operation includes an async timeout operation.

Previously, the stack trace only showed the timeout operation. It did not show the “root cause” of the operation.

With the latest changes, DevTools now shows the operation originates from the onClick event in the button component, then the increment function, followed by the timeout operation. 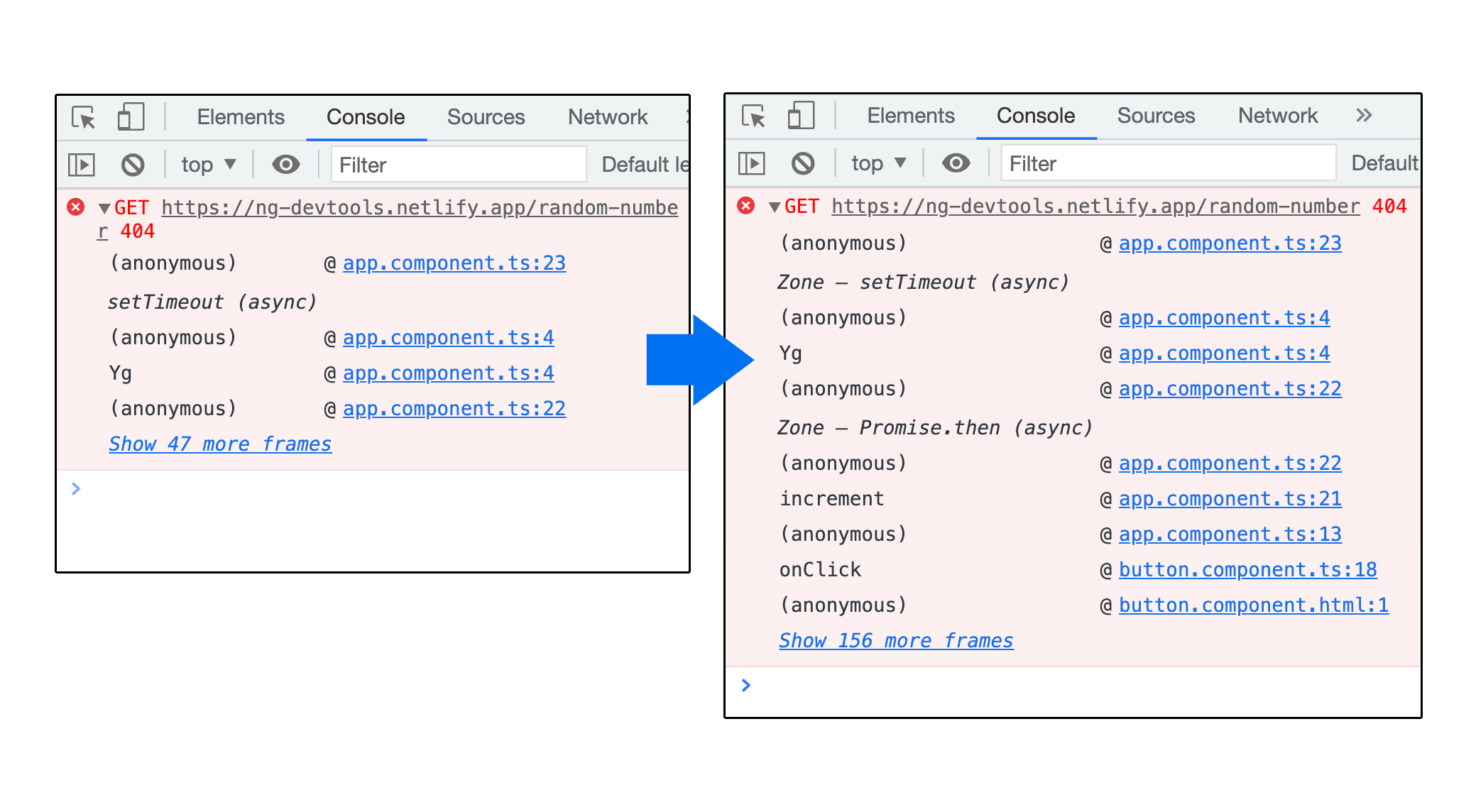 Behind the scenes, DevTools introduced a new “Async Stack Tagging” feature. You can tell the whole story of the operation by linking both parts of the async code together with the new console.createTask() method. See Modern debugging in DevTools to learn more.

Does it sound complicated? Not at all. Most of the time, the framework you are using handles the scheduling and async execution. In that case, it is up to the framework to use the API, you don’t need to worry about it. (e.g. Angular implemented these changes)

Identify issues in your code quicker during debugging because DevTools now automatically adds known third-party scripts to the ignore list.

Open this demo and click on the increment button. Expand the error message in Console. The stack trace shows only your code (e.g. app.component.ts button.component.ts). Click Show more frames to view the full stack trace.

Previously, the stack trace included third-party scripts like zone.js and core.mjs. These are not your source code, they are generated by bundlers (e.g. webpack) or frameworks (e.g. Angular). It took a longer time to identify the root cause of an error. 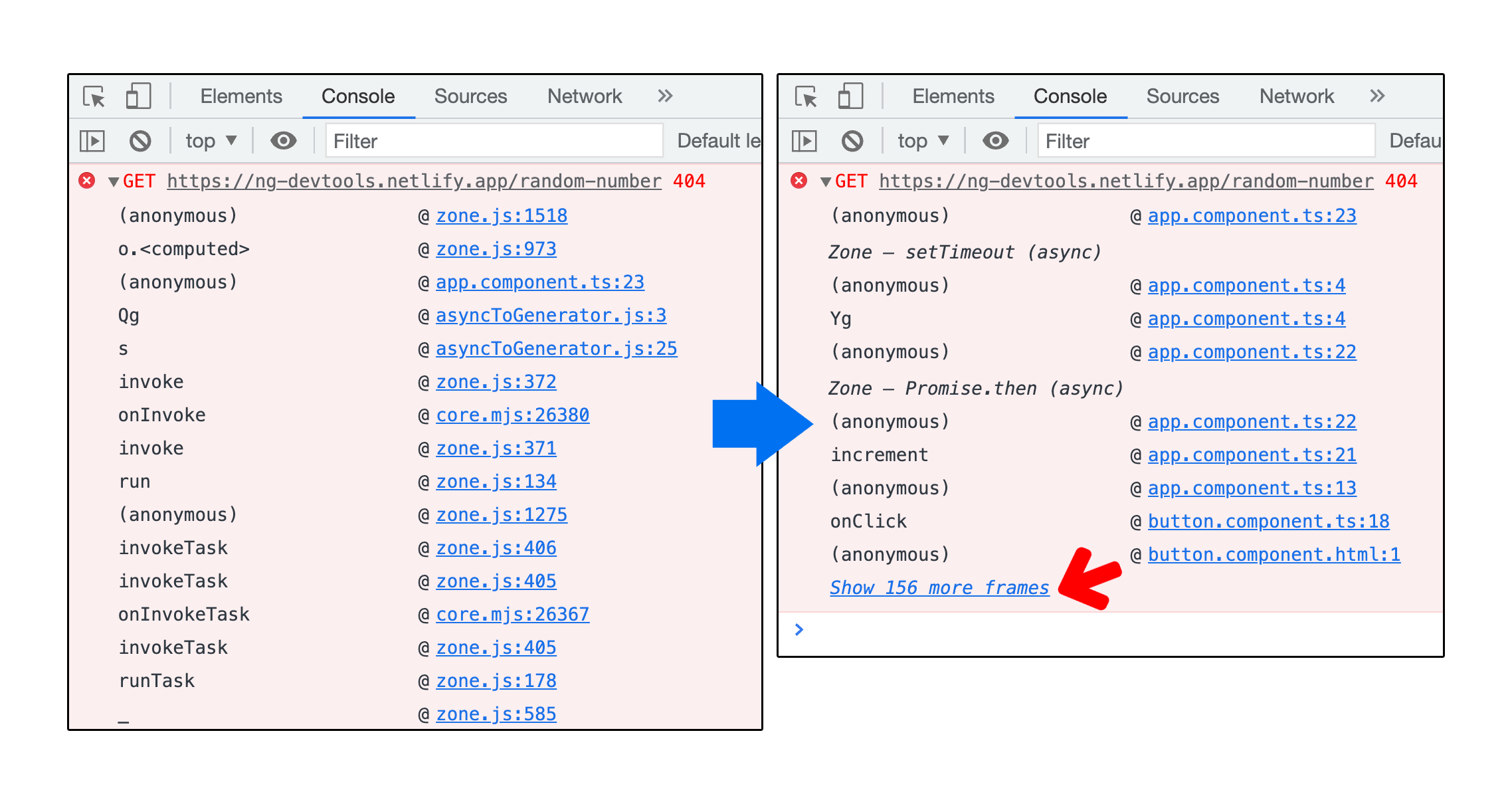 Behind the scenes, DevTools ignores third-party scripts based on the new x_google_ignoreList property in sourcemaps. Frameworks and bundlers need to supply this information. See Case Study: Better Angular Debugging with DevTools. 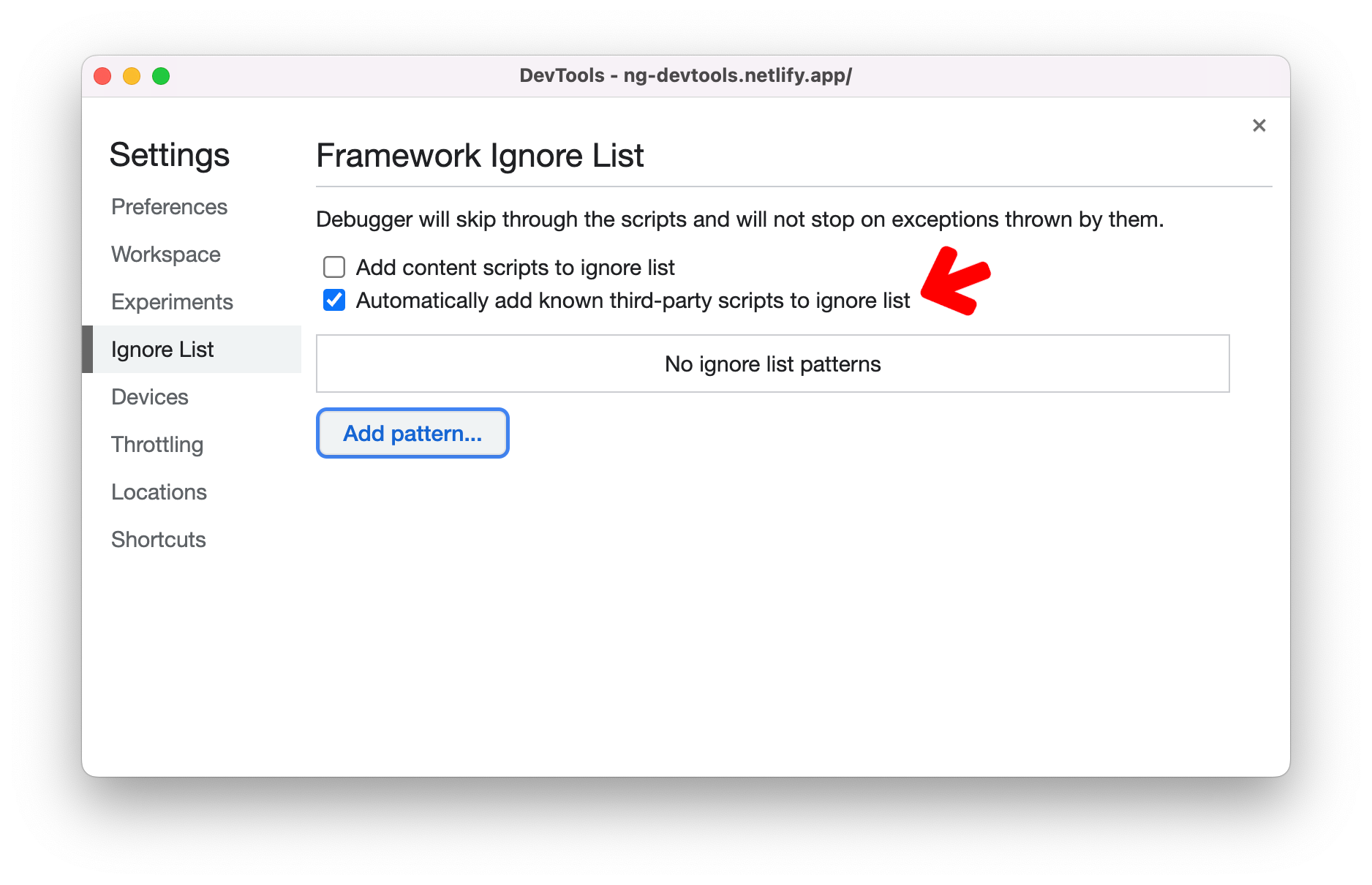 With the Automatically add known third-party scripts to ignore list setting, the call stack now shows only frames that are relevant to your code. 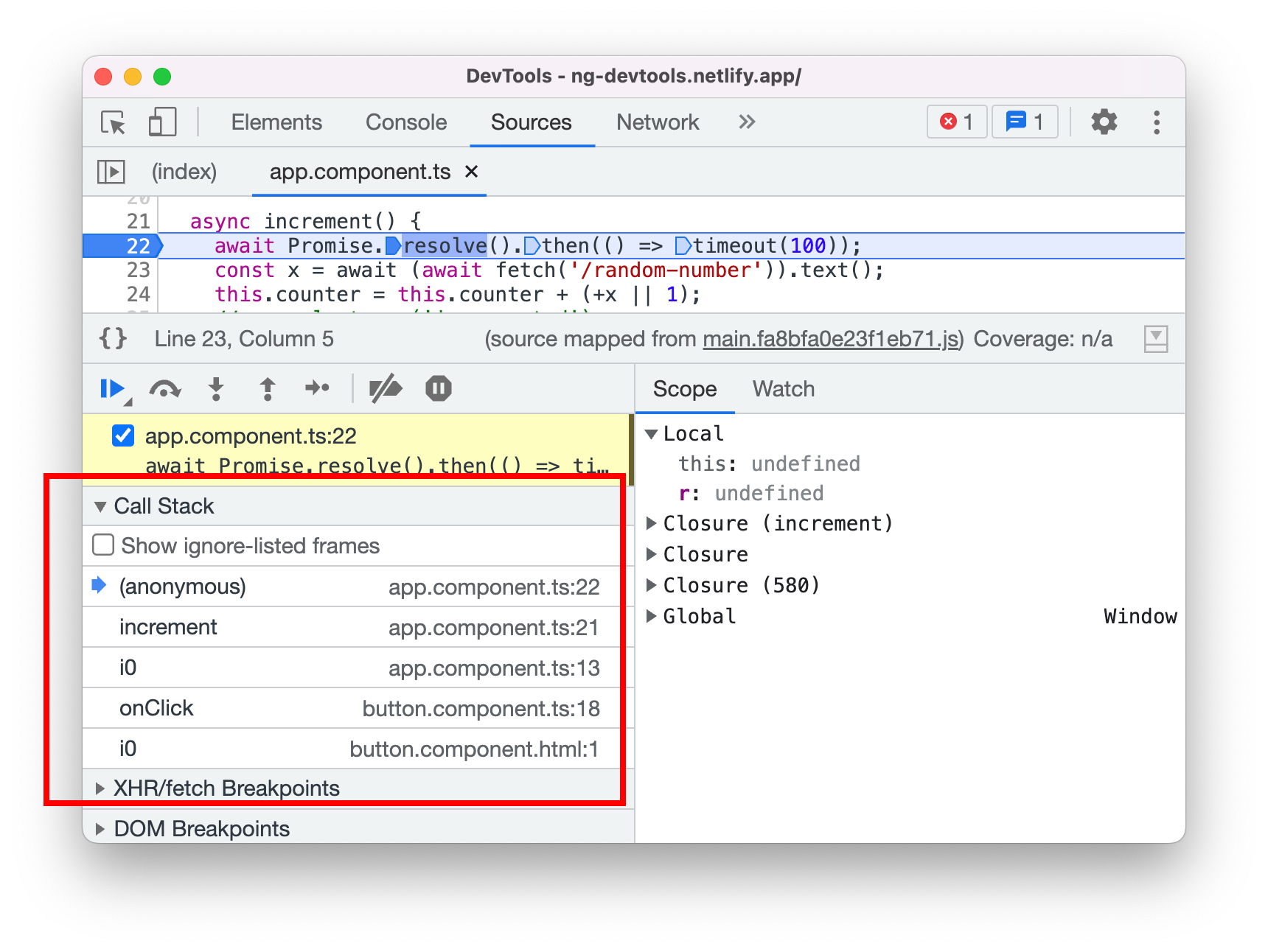 Enable hide ignore-listed sources to hide irrelevant files in the Navigation pane. This way, you can focus only on your code.

Open this demo. In the Sources panel. The node_modules and webpack are the third-party scripts. Click on the 3-dot menu and select hide ignore-listed sources to hide them from the pane. 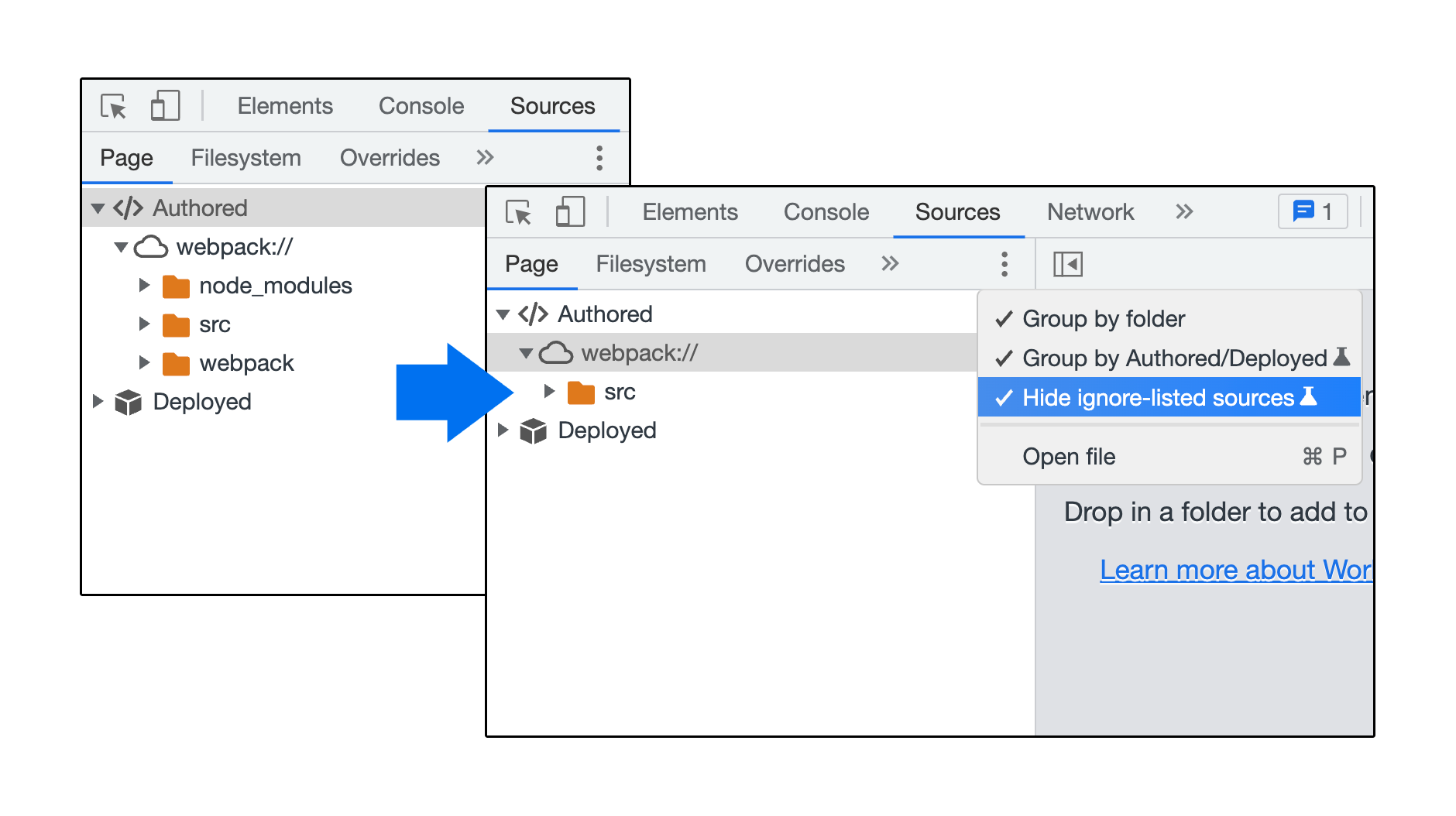 With the hide ignore-listed sources setting, you can find your file quicker with the Command Menu. Previously, searching files in the Command Menu returns third-party files that might not be relevant to you.

For example, enable the hide ignore-listed sources setting and click on the 3-dot menu. Select Open file. Type “ton” to search for button components. Previously, the results include files from node_modules, one of the node_modules files even shown up as the first result. 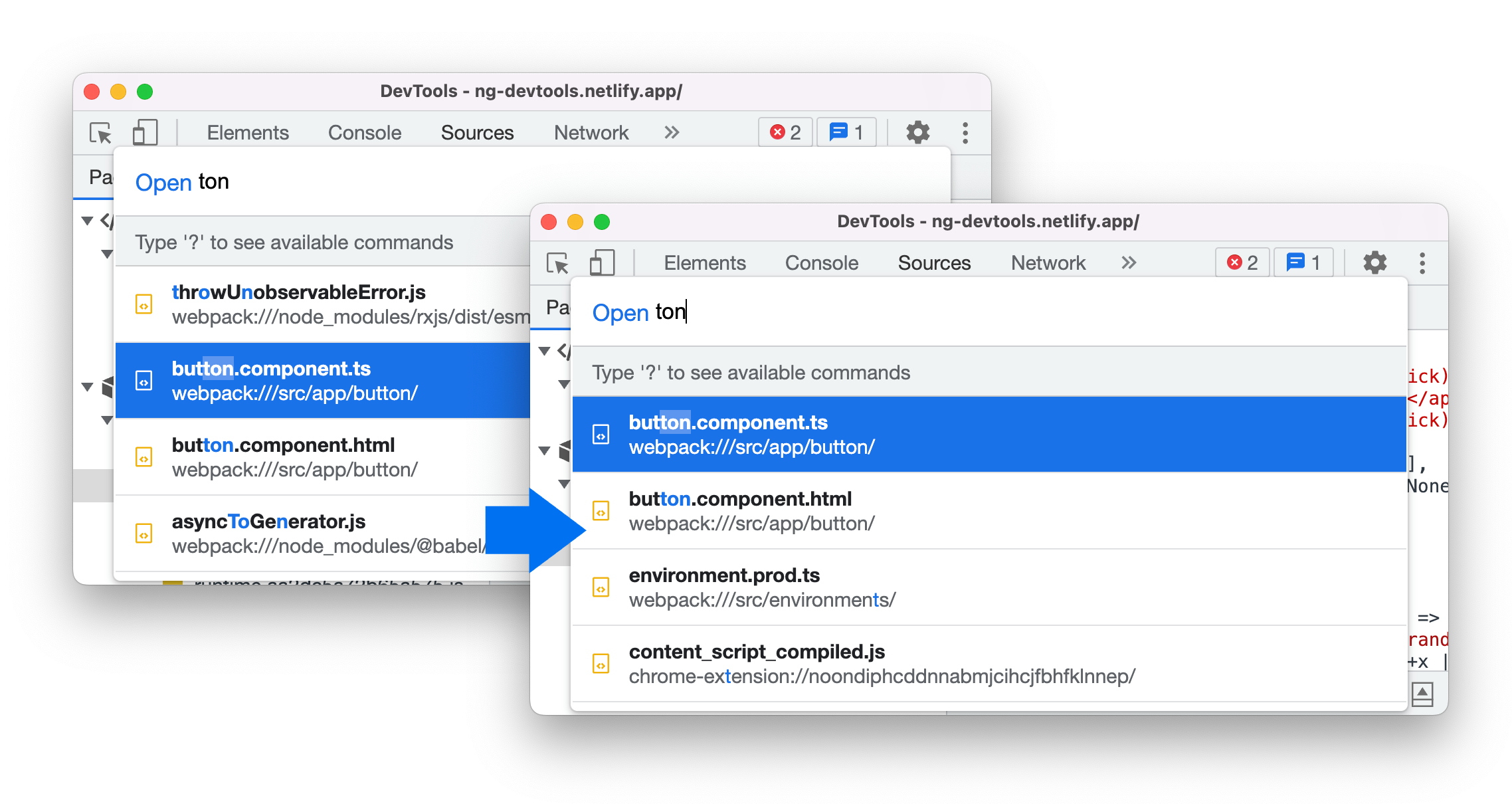 Use the new Interactions track in the Performance panel to visualize interactions and track down potential responsiveness issues.

For example, start a performance recording on this demo page. Click on a coffee and stop recording. Two interactions show in the Interactions track. Both interactions have the same IDs, indicating the interactions are triggered from the same user interaction. 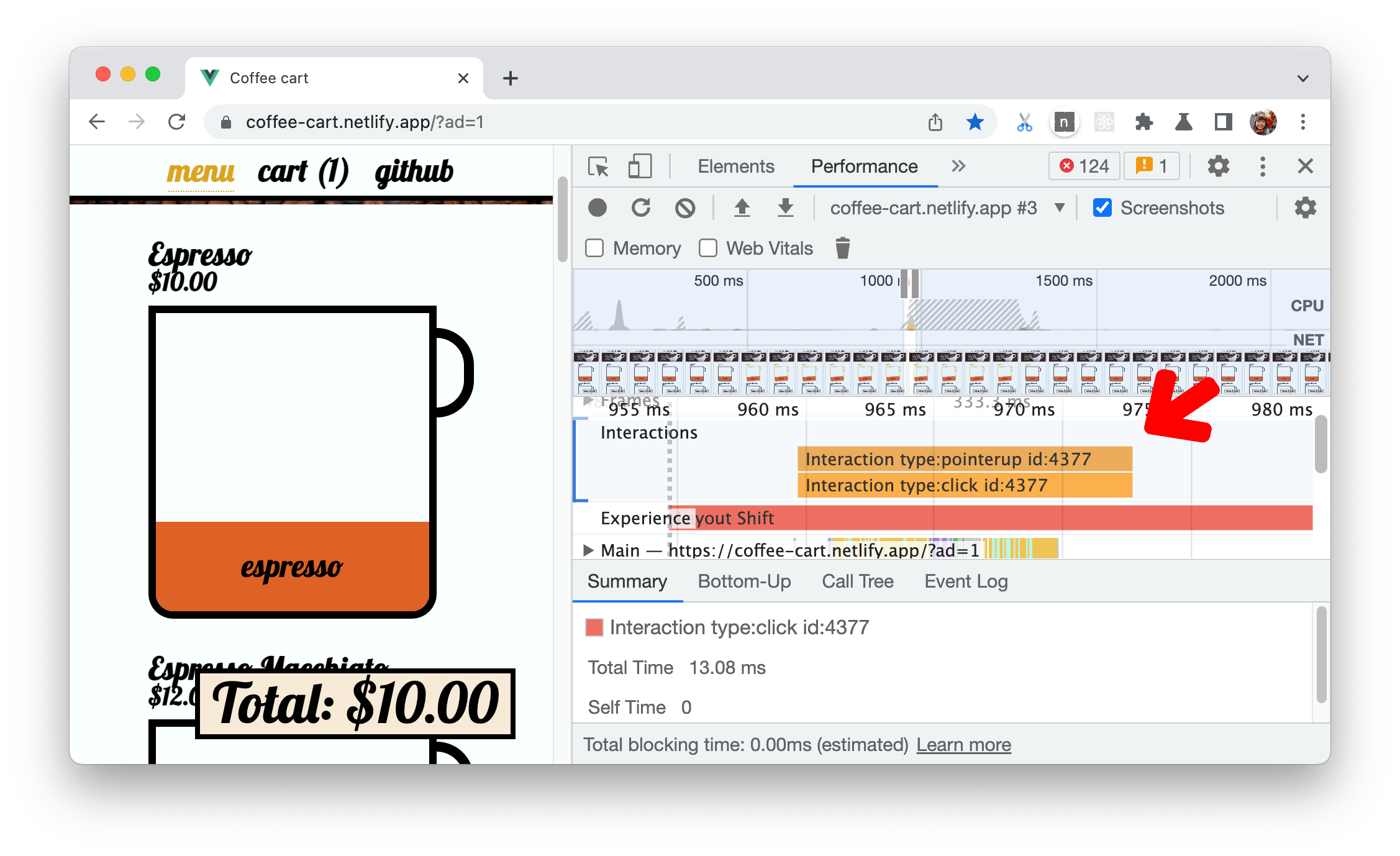 The Performance Insights panel now shows the timings breakdown of the Largest Contentful Paint (LCP). Use these timings information to understand and identify an opportunity to improve LCP performance. 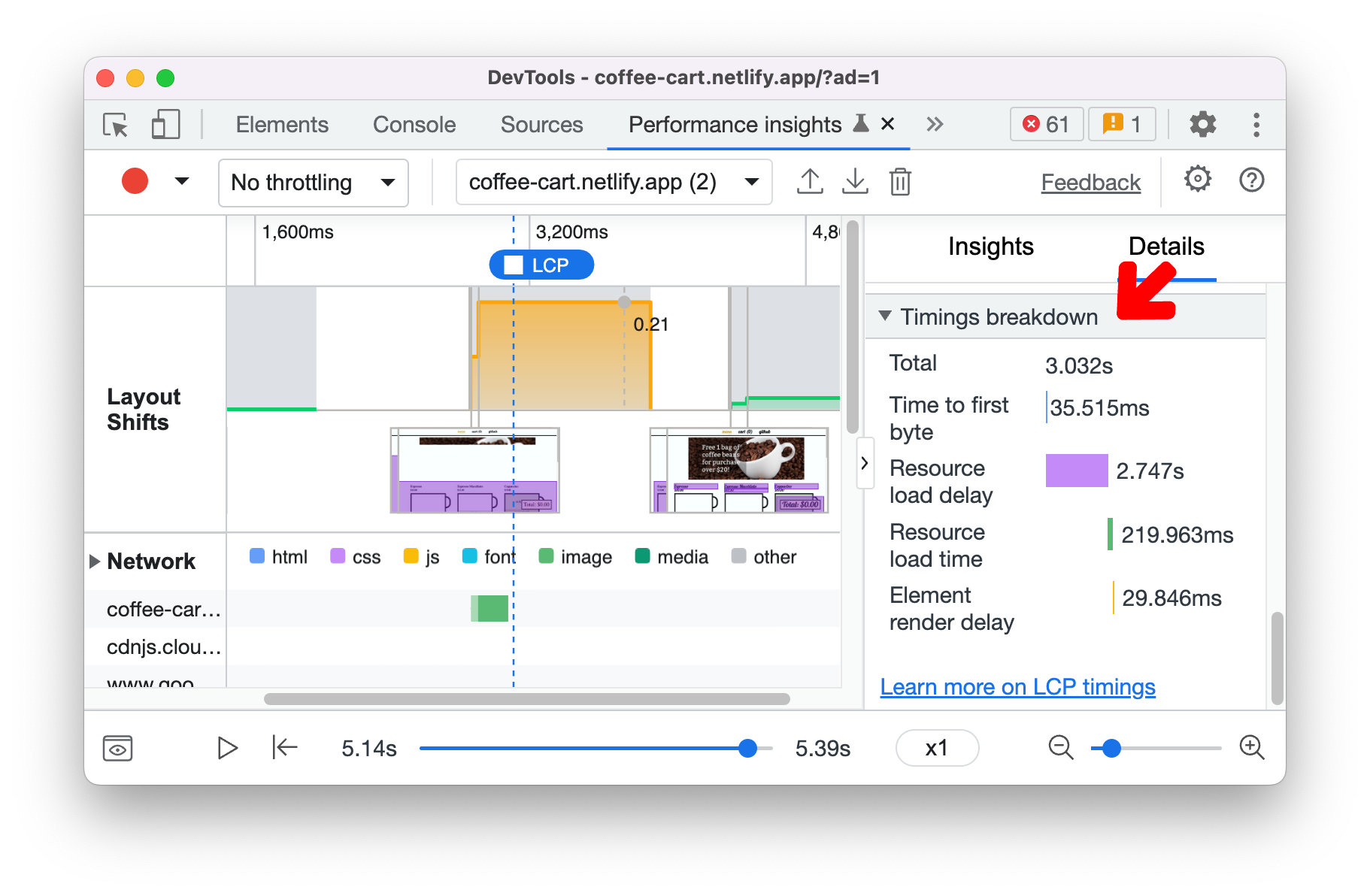 # Auto-generate default name for recordings in the Recorder panel 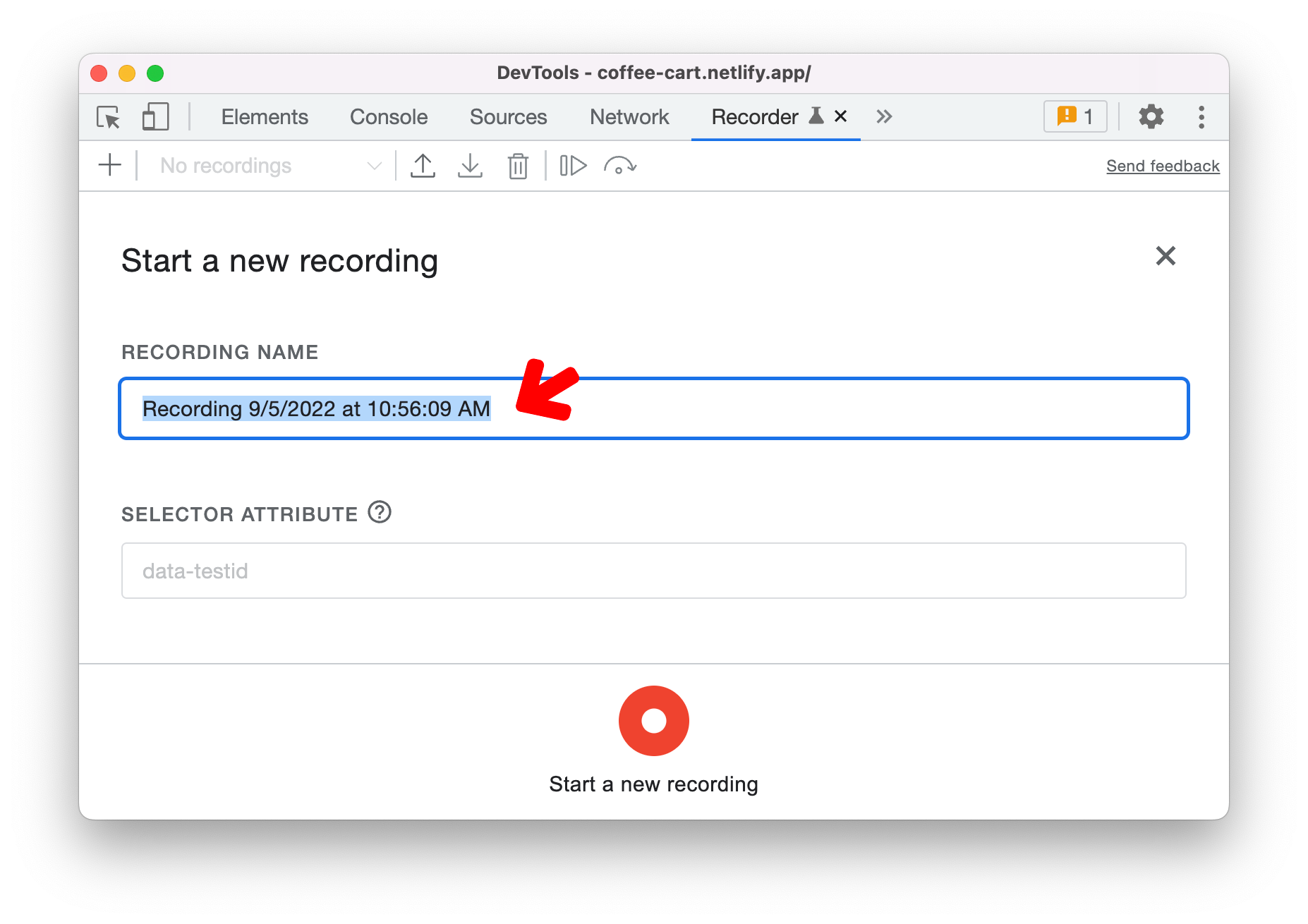