Learn how to use Chrome and DevTools to find memory issues that affect page performance, including memory leaks, memory bloat, and frequent garbage collections.

In the spirit of the RAIL performance model, the focus of your performance efforts should be your users.

Memory issues are important because they are often perceivable by users. Users can perceive memory issues in the following ways:

A memory leak is easy to define. If a site is progressively using more and more memory, then you've got a leak. But memory bloat is a bit harder to pin down. What qualifies as "using too much memory"?

There are no hard numbers here, because different devices and browsers have different capabilities. The same page that runs smoothly on a high-end smartphone might crash on a low-end smartphone.

The key here is to use the RAIL model and focus on your users. Find out what devices are popular with your users, and then test out your page on those devices. If the experience is consistently bad, the page may be exceeding the memory capabilities of those devices.

# Monitor memory use in realtime with the Chrome Task Manager

Use the Chrome Task Manager as a starting point to your memory issue investigation. The Task Manager is a realtime monitor that tells you how much memory a page is currently using.

These two columns tell you different things about how your page is using memory:

Tip: It's a good practice to start and end your recording with a forced garbage collection. Click the collect garbage button (

) while recording to force garbage collection.

To demonstrate Timeline memory recordings, consider the code below:

Every time that the button referenced in the code is pressed, ten thousand div nodes are appended to the document body, and a string of one million x characters is pushed onto the x array. Running this code produces a Timeline recording like the following screenshot:

Now, an analysis of the code compared with the screenshot. If you look at the node counter (the green graph) you can see that it matches up cleanly with the code. The node count increases in discrete steps. You can presume that each increase in the node count is a call to grow(). The JS heap graph (the blue graph) is not as straightforward. In keeping with best practices, the first dip is actually a forced garbage collection (achieved by pressing the collect garbage button). As the recording progresses you can see that the JS heap size spikes. This is natural and expected: the JavaScript code is creating the DOM nodes on every button click and doing a lot of work when it creates the string of one million characters. The key thing here is the fact that the JS heap ends higher than it began (the "beginning" here being the point after the forced garbage collection). In the real world, if you saw this pattern of increasing JS heap size or node size, it would potentially mean a memory leak.

A DOM node can only be garbage collected when there are no references to it from either the page's DOM tree or JavaScript code. A node is said to be "detached" when it's removed from the DOM tree but some JavaScript still references it. Detached DOM nodes are a common cause of memory leaks. This section teaches you how to use DevTools' heap profilers to identify detached nodes.

Clicking the button referenced in the code creates a ul node with ten li children. These nodes are referenced by the code but do not exist in the DOM tree, so they're detached.

Heap snapshots are one way to identify detached nodes. As the name implies, heap snapshots show you how memory is distributed among your page's JS objects and DOM nodes at the point of time of the snapshot.

To create a snapshot, open DevTools and go to the Profiles panel, select the Take Heap Snapshot radio button, and then press the Take Snapshot button.

The snapshot may take some time to process and load. Once it's finished, select it from the lefthand panel (named HEAP SNAPSHOTS).

Type Detached in the Class filter textbox to search for detached DOM trees.

Expand the carats to investigate a detached tree.

Click on a yellow node to investigate it further. In the Objects pane you can see more information about the code that's referencing it. For example, in the screenshot below you can see that the detachedTree variable is referencing the node. To fix this particular memory leak, you would study the code that uses detachedTree and ensure that it removes its reference to the node when it's no longer needed.

The Allocation Timeline is another tool that can help you track down memory leaks in your JS heap.

To demonstrate the Allocation Timeline consider the following code:

Every time that the button referenced in the code is pushed, a string of one million characters is added to the x array.

As you're recording, notice if any blue bars show up on the Allocation Timeline, like in the screenshot below.

Expand the object and click on its value to view more details about it in the Object pane. For example, in the screenshot below, by viewing the details of the object that was newly allocated, you'd be able to see that it was allocated to the x variable in the Window scope.

Use the Record Allocation Profiler type to view memory allocation by JavaScript function. 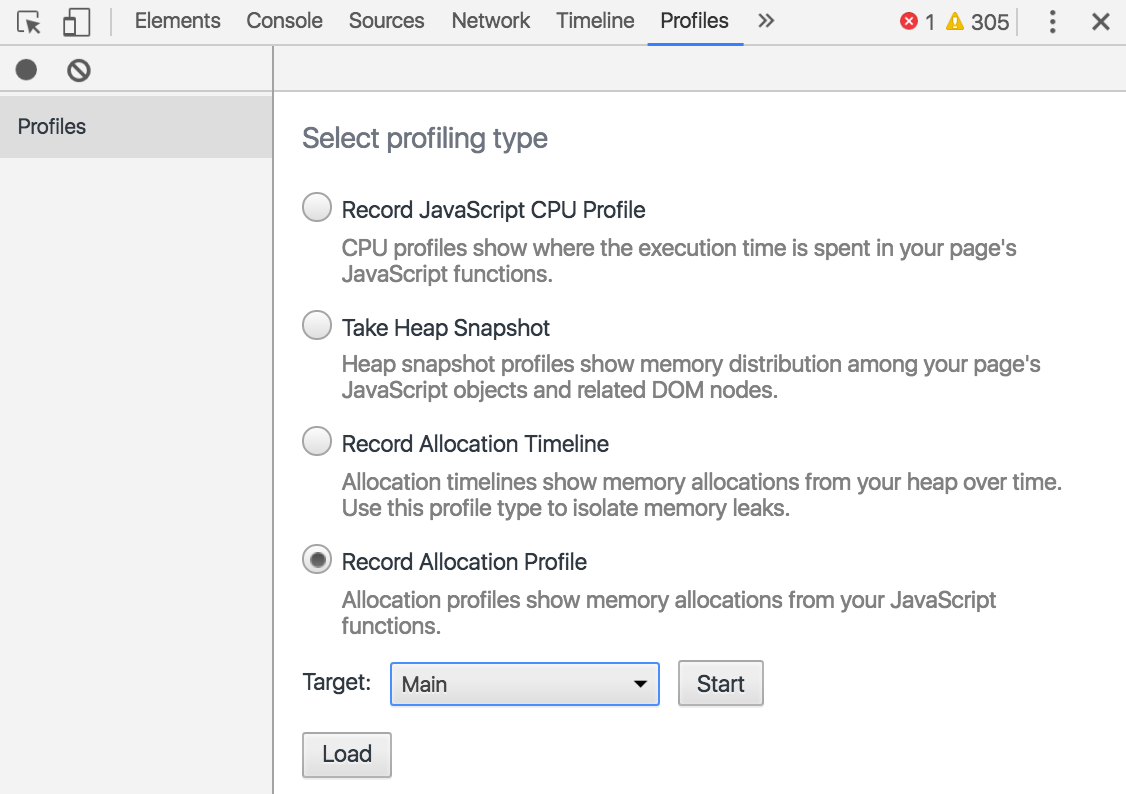 DevTools shows you a breakdown of memory allocation by function. The default view is Heavy (Bottom Up), which displays the functions that allocated the most memory at the top.

If your page appears to pause frequently, then you may have garbage collection issues.

Once you've identified the problem, you can use an Allocation Timeline recording to find out where memory is being allocated and which functions are causing the allocations.