Our latest news, updates, and stories by Meggin Kearney.

Learn how to record heap snapshots with the Chrome DevTools heap profiler and find memory leaks. 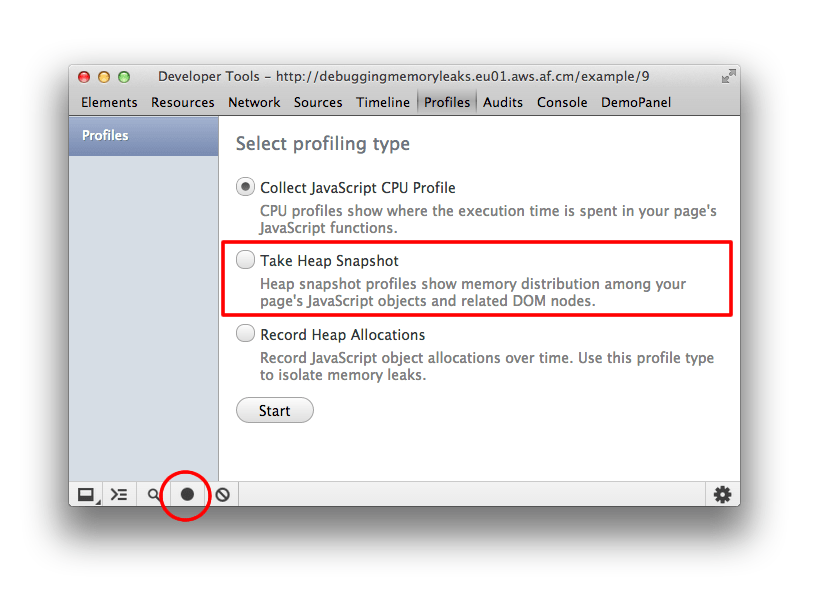 Snapshots are initially stored in the renderer process memory. They are transferred to the DevTools on demand, when you click on the snapshot icon to view it.

After the snapshot has been loaded into DevTools and has been parsed, the number below the snapshot title appears and shows the total size of the reachable JavaScript objects: 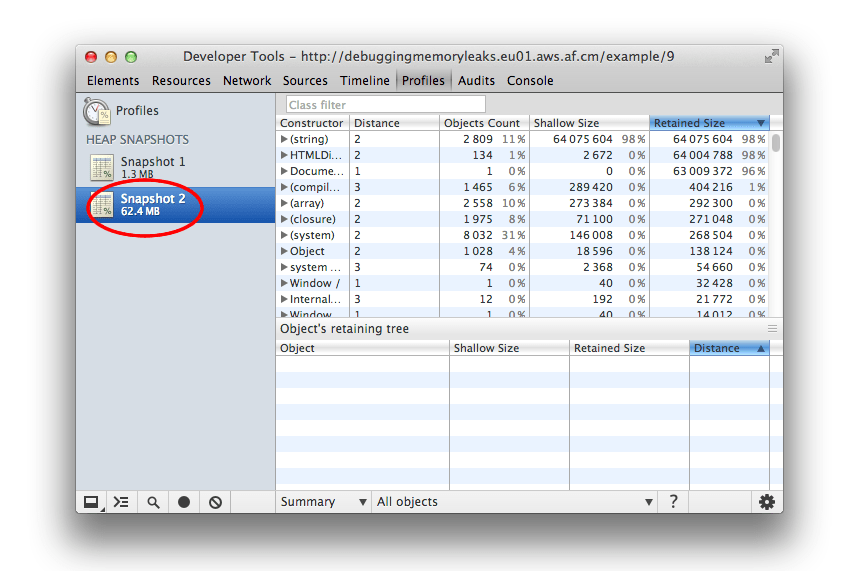 Note: Only reachable objects are included in snapshots. Also, taking a snapshot always starts with a garbage collection.

Remove snapshots (both from DevTools and renderers memory) by pressing the Clear all profiles icon: 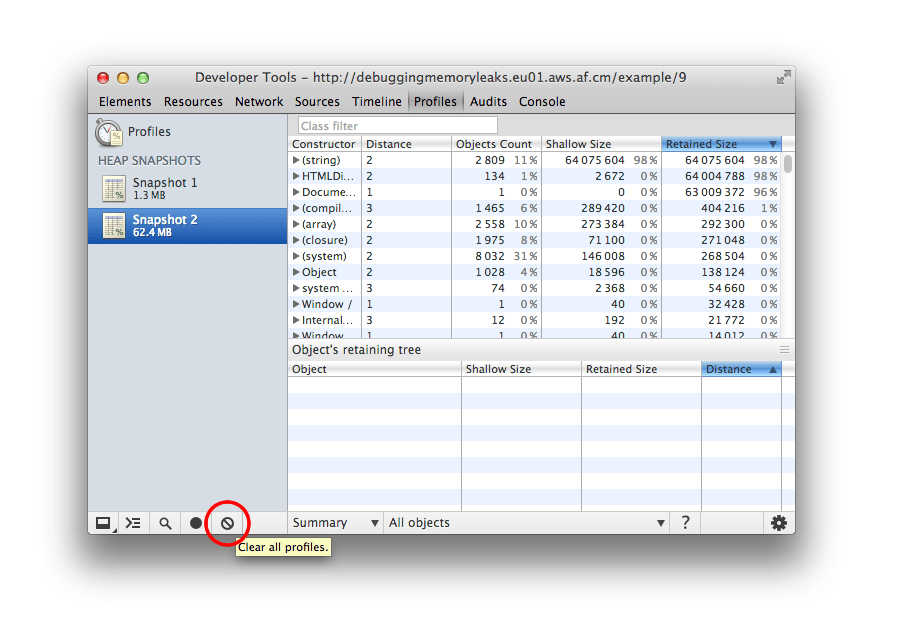 Closing the DevTools window will not delete profiles from the renderers memory. When reopening DevTools, all previously taken snapshots will reappear in the list of snapshots.

Example: Try out this example of scattered objects and profile it using the Heap Profiler. You should see a number of (object) item allocations.

Comparison view displays difference between two snapshots. Use it to compare two (or more) memory snapshots of before and after an operation. Inspecting the delta in freed memory and reference count lets you confirm the presence and cause of a memory leak.

Containment view allows exploration of heap contents. It provides a better view of object structure, helping analyze objects referenced in the global namespace (window) to find out what is keeping them around. Use it to analyze closures and dive into your objects at a low level.

Dominators view shows the dominators tree and can be useful to find accumulation points. This view helps confirm that no unexpected references to objects are still hanging around and that deletion/garbage collection is actually working.

To switch between views, use the selector at the bottom of the view: 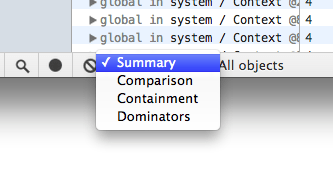 Note: Not all properties are stored on the JavaScript heap. Properties implemented using getters that execute native code aren't captured. Also, non-string values such as numbers are not captured.

Initially, a snapshot opens in the Summary view, displaying object totals, which can be expanded to show instances: 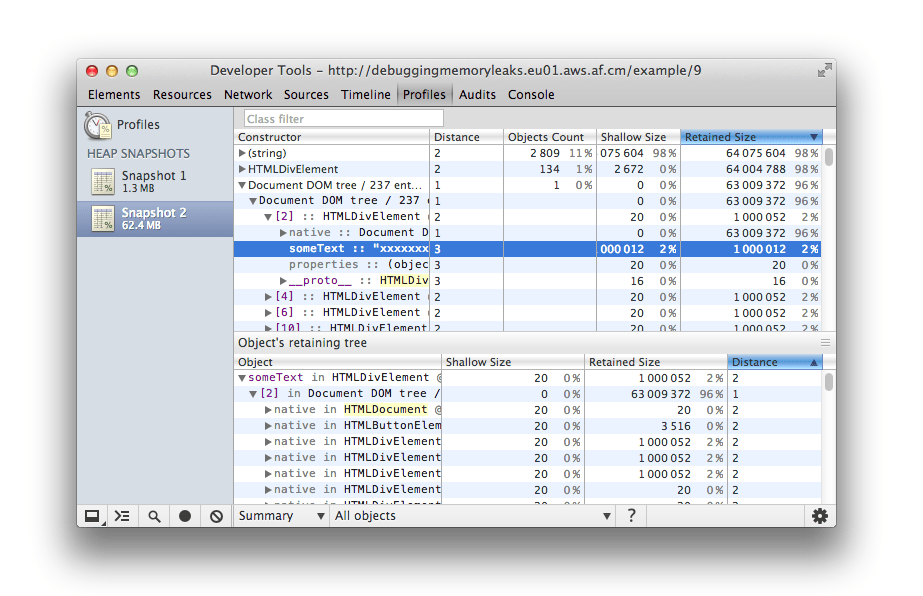 After expanding a total line in the upper view, all of its instances are displayed. For each instance, its shallow and retained sizes are displayed in the corresponding columns. The number after the @ character is the objects' unique ID, allowing you to compare heap snapshots on per-object basis.

Remember that yellow objects have JavaScript references on them and red objects are detached nodes which are referenced from one with a yellow background.

What do the various constructor (group) entries in the Heap profiler correspond to?

Example: Try this demo page to understand how the Summary view can be used.

Find leaked objects by comparing multiple snapshots to each other. To verify that a certain application operation doesn't create leaks (for example, usually a pair of direct and reverse operations, like opening a document, and then closing it, should not leave any garbage), you may follow the scenario below:

In the Comparison view, the difference between two snapshots is displayed. When expanding a total entry, added and deleted object instances are shown: 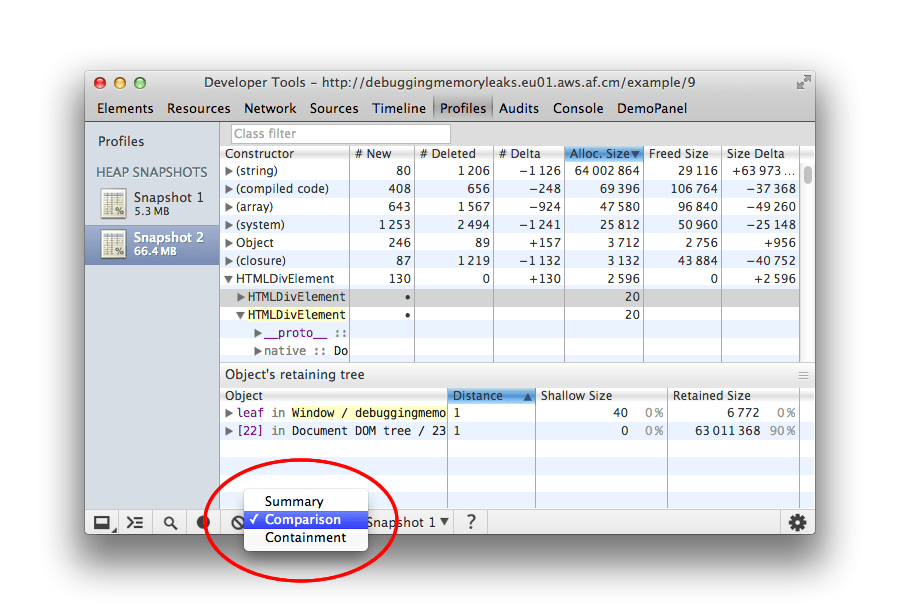 Example: Try this demo page to get an idea how to use snapshot comparison for detecting leaks.

The Containment view is essentially a "bird's eye view" of your application's objects structure. It allows you to peek inside function closures, to observe VM internal objects that together make up your JavaScript objects, and to understand how much memory your application uses at a very low level. 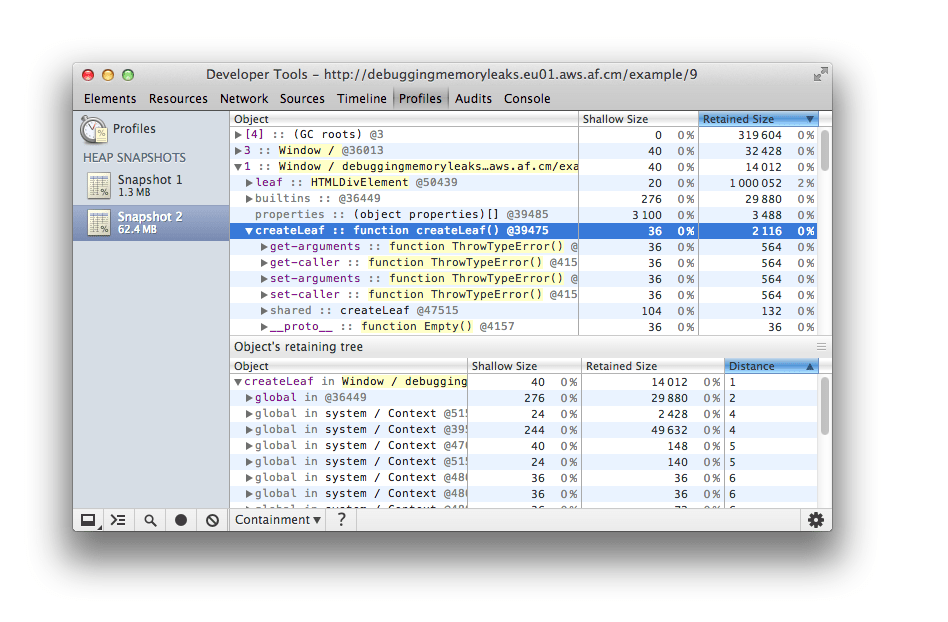 Example: Try this demo page for finding out how to explore closures and event handlers using the view.

A tip about closures

It helps a lot to name the functions so you can easily distinguish between closures in the snapshot. For example, this example does not use named functions:

Whilst this example does:

Examples: Try out this example of why eval is evil to analyze the impact of closures on memory. You may also be interested in following it up with this example that takes you through recording heap allocations.

The Dominators view shows the dominators tree for the heap graph. It looks similar to the Containment view, but lacks property names. This is because a dominator of an object may lack direct references to it; the dominators tree is not a spanning tree of the graph. But this only serves for good, as helps us to identify memory accumulation points quickly.

Note: In Chrome Canary, Dominators view can be enabled by going to Settings > Show advanced heap snapshot properties and restarting the DevTools. 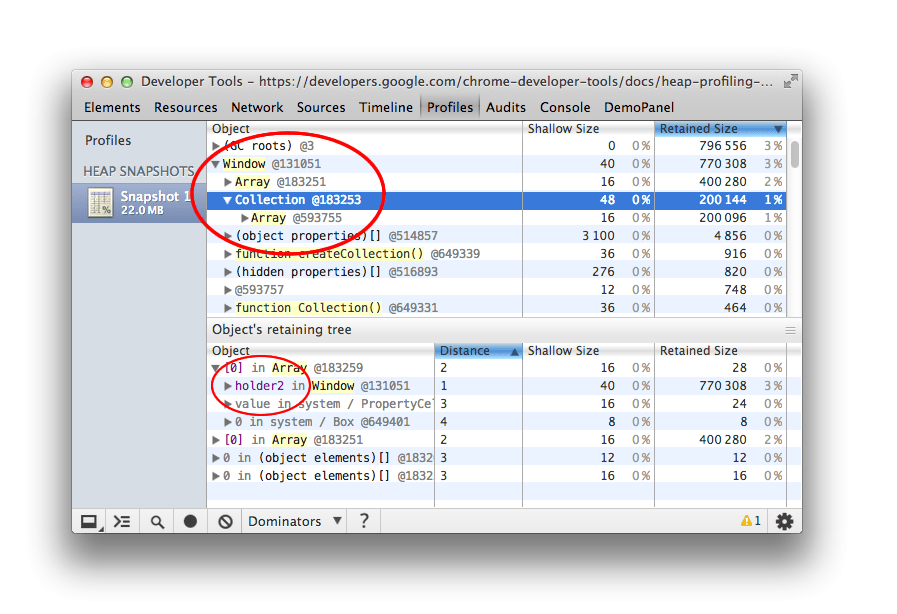 Examples: Try this demo to train yourself in finding accumulation points. Follow it up with this example of running into retaining paths and dominators.

Properties and property values of objects have different types and are colored accordingly. Each property has one of four types:

Objects designated as Systemdo not have a corresponding JavaScript type. They are part of JavaScript VM's object system implementation. V8 allocates most of its internal objects in the same heap as the user's JS objects. So these are just v8 internals.

To find an object in the collected heap you can search using Ctrl + F and give the object ID.

DOM leaks can be bigger than you think. Consider the following sample - when is the #tree GC?

#leaf maintains a reference to it's parent (parentNode) and recursively up to #tree, so only when leafRef is nullified is the WHOLE tree under #tree a candidate for GC. 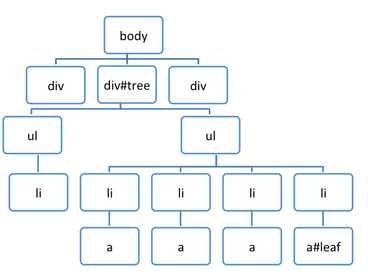 Example: Try this demo to play with detached DOM trees.