This guide assumes that you're familiar with inspecting CSS in Chrome DevTools. See View and change CSS to learn the basics.

# Inspect the CSS you author

Suppose that you added some CSS to an element and want to make sure the new styles are applied properly. When you refresh the page, the element looks the same as before. Something is wrong.

The first thing to do is inspect the element and make sure that your new CSS is actually applied to the element.

Sometimes, you'll see your new CSS in the Elements > Styles pane but your new CSS is in pale text, non-editable, crossed out, or has a warning or hint icon next to it.

# Understand CSS in the Styles pane

The Styles pane recognizes many kinds of CSS issues and highlights them in different ways.

The Styles pane crosses out properties with invalid syntax and displays

warning icons next to them. 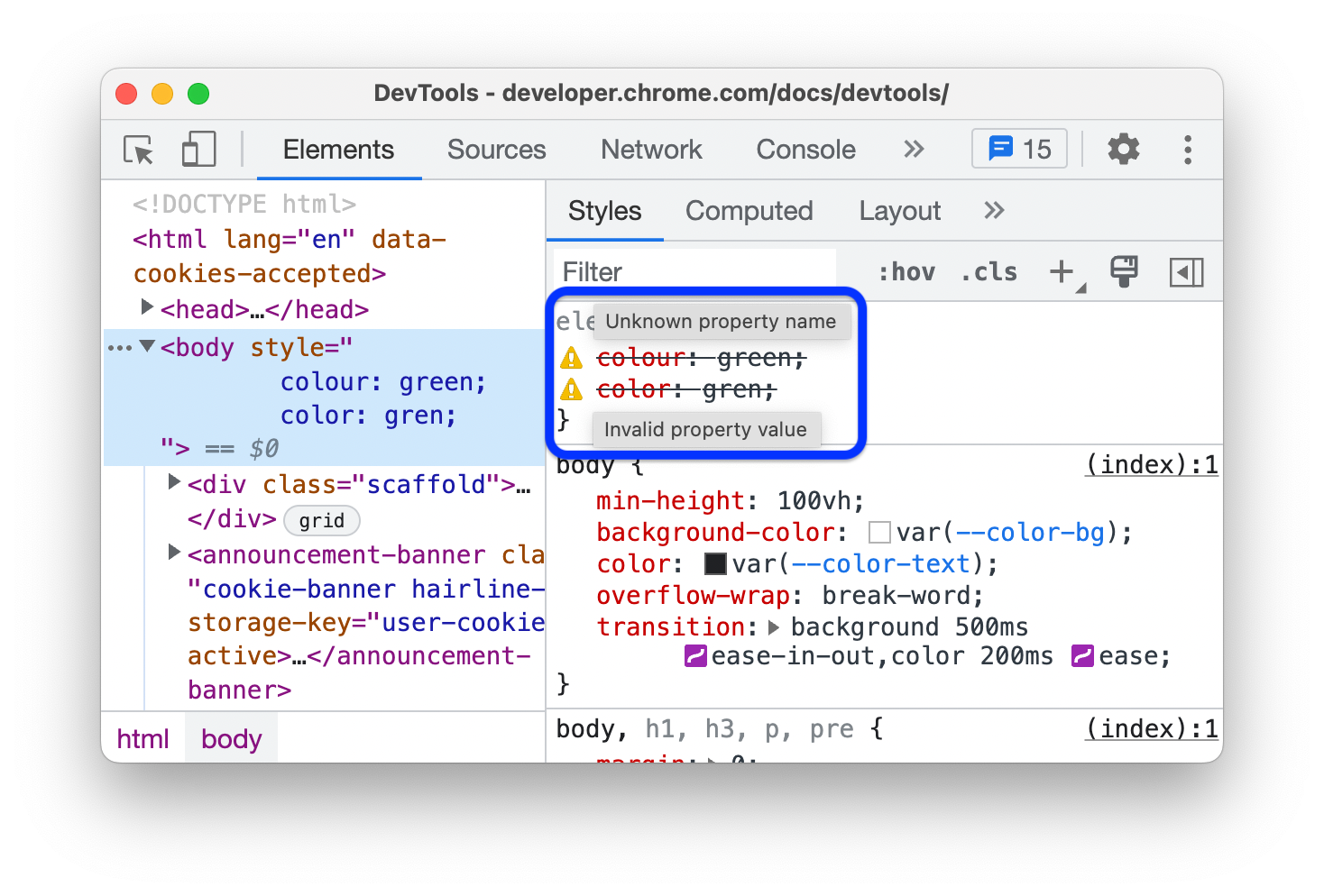 The Styles pane crosses out properties that are overridden by other properties according to the Cascading order.

In this example, the width: 300px; style attribute on the element overrides width: 100% on the .youtube class.

The Styles pane displays in pale text and puts

information icons next to properties that are valid but have no effect because of other properties.

These pale properties are inactive because of CSS logic, not the Cascading order. 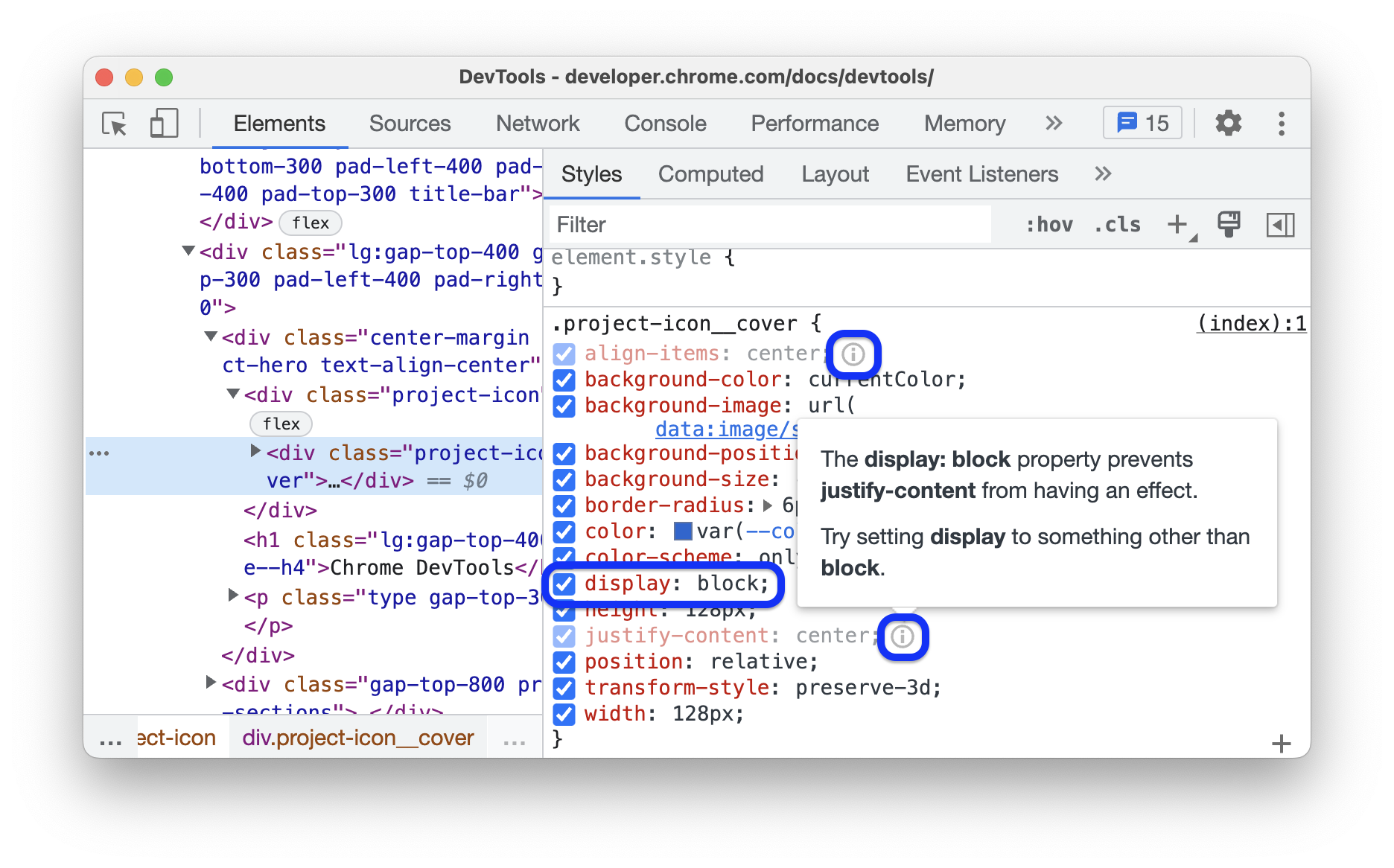 In this example, the display: block; property disables justify-content and align-items that control flex or grid layouts.

The Styles pane lists properties in Inherited from <element-name> sections depending on their default inheritance: 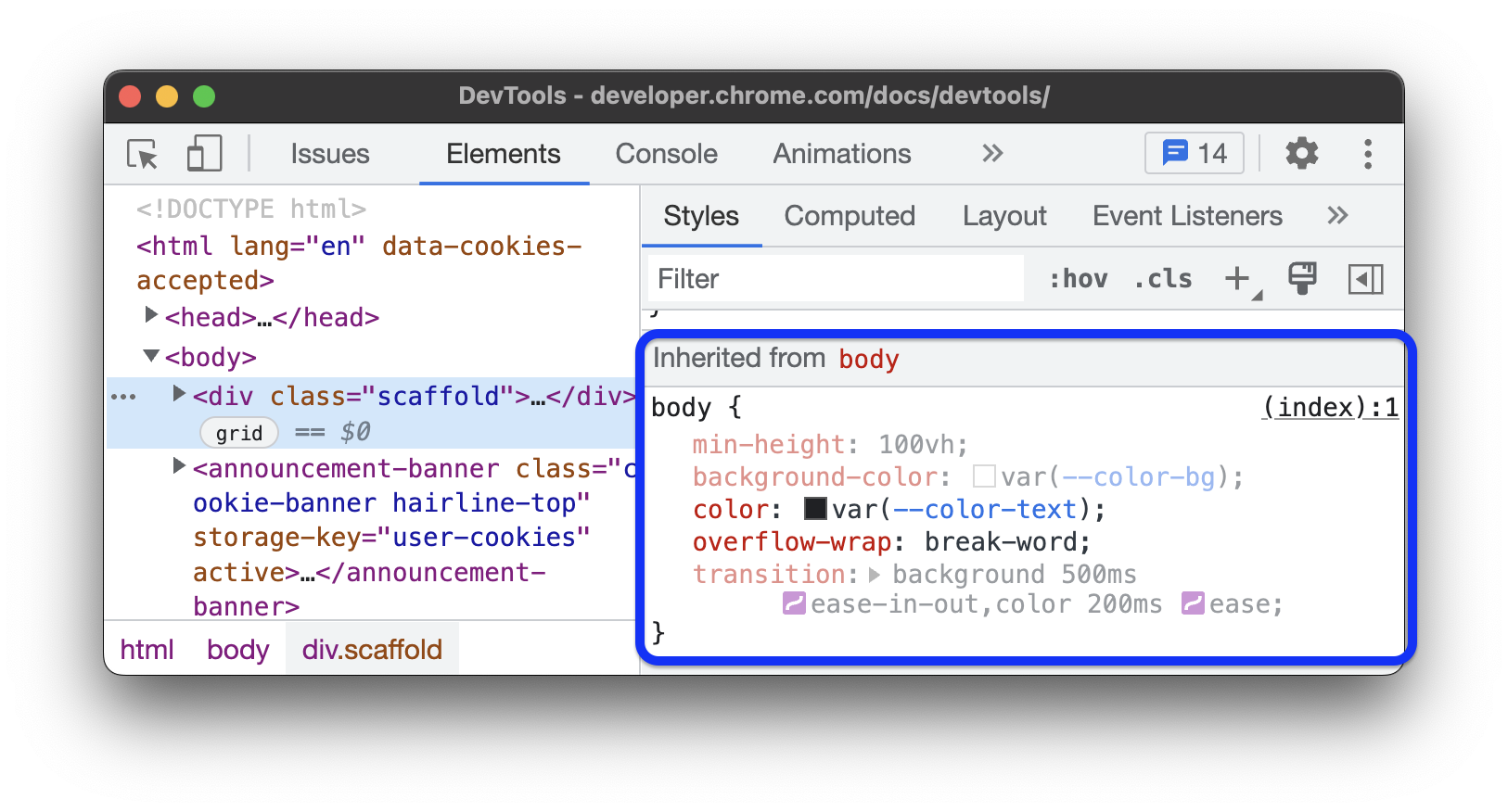 Shorthand (concise) properties let you set multiple CSS properties at once and can make your stylesheet more readable. However, due to the short nature of such properties, you may miss a longhand (precise) property that overrides a property implied by the shorthand.

drop-down lists that contain all the properties that are shortened. 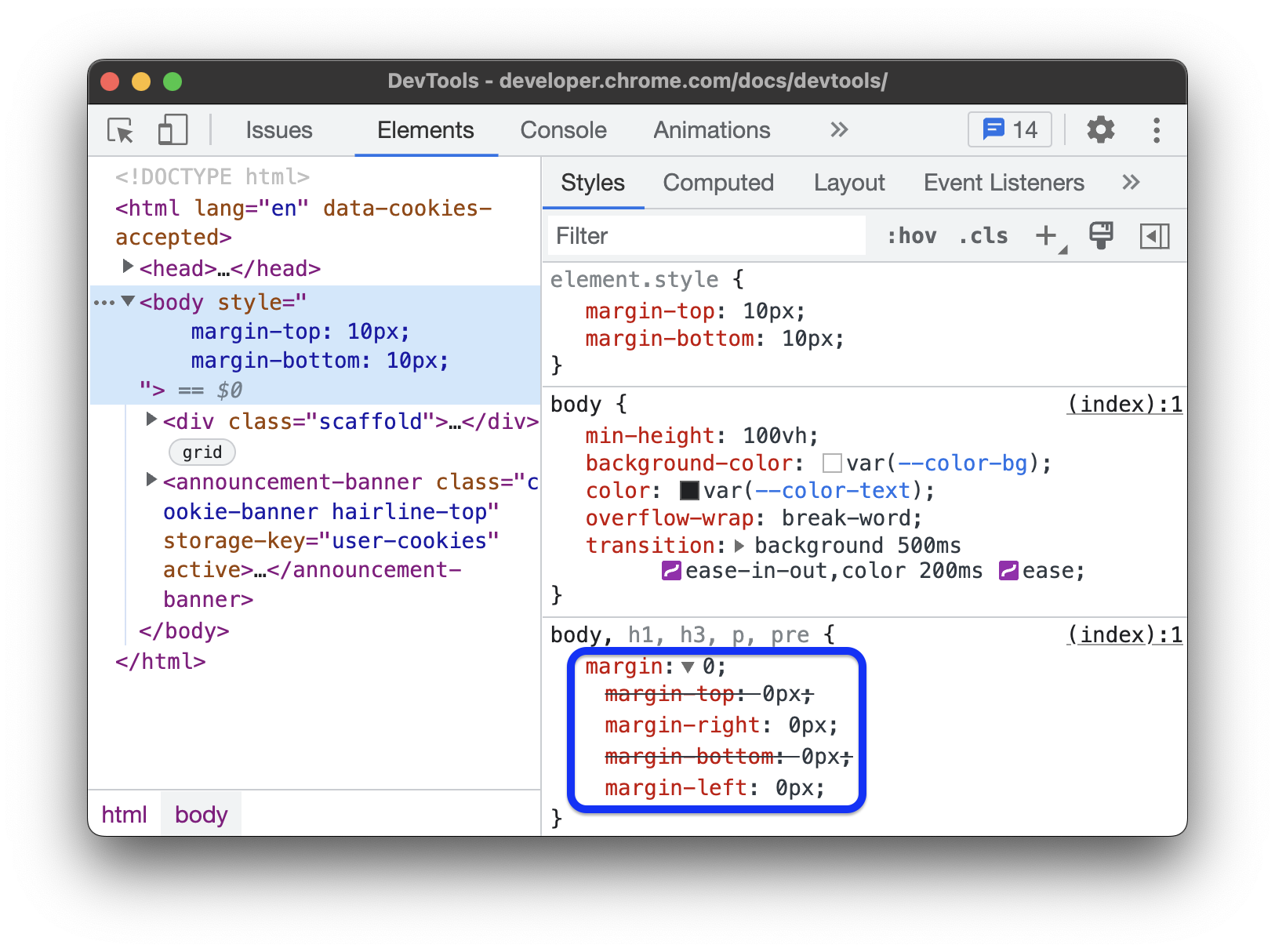 In this example, two of four shortened properties are actually overridden.

# Inspect an element that still isn't styled the way you think

To get a hint at what goes wrong, open the Computed pane to see the "final" CSS applied to an element and compare to that you declared.

The Elements > Styles pane displays the exact set of CSS rules as they are written in various stylesheets. On the other hand, the Elements > Computed pane lists resolved CSS values that Chrome uses to render an element:

# Understand CSS in the Computed pane

The Computed pane lists the properties declared in any stylesheet in regular font, both element's own and inherited. Click the

expand icon next to them to see their source. 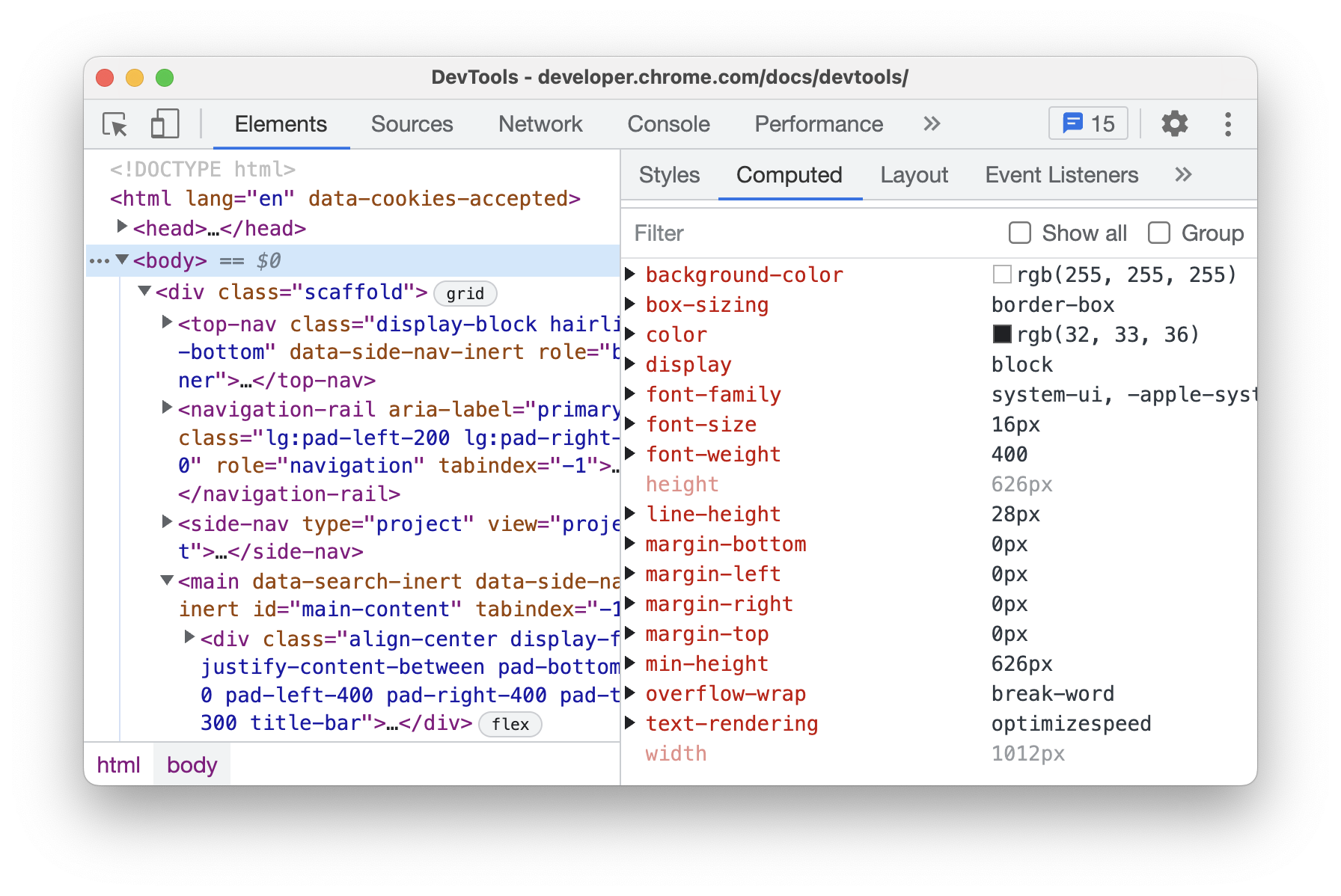 To see the declaration in the Styles pane, hover over the expanded property and click the 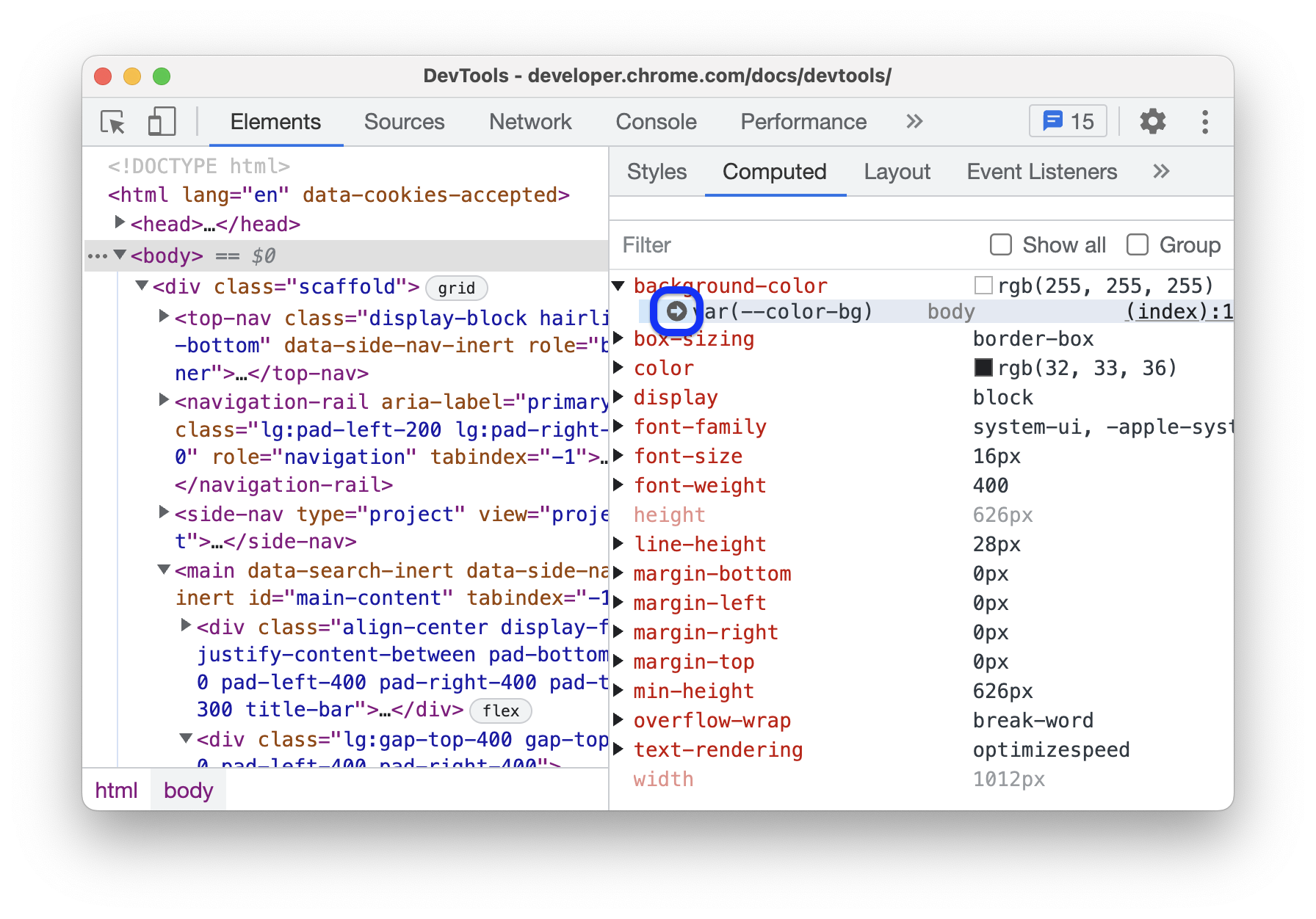 To see the declaration in the Sources pane, click the link to the source file. 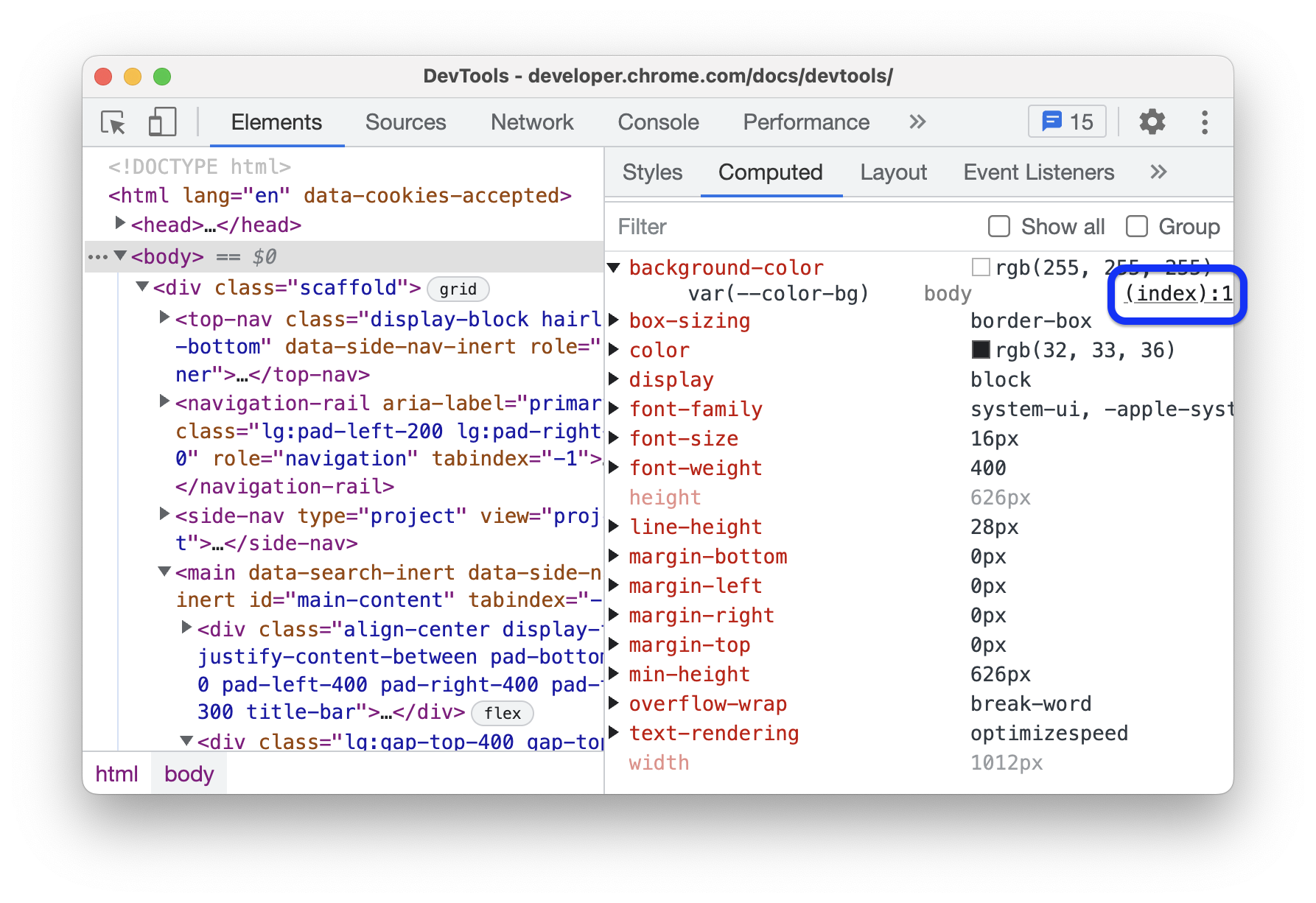 For properties with multiple sources, the Computed pane shows the Cascade winner first. 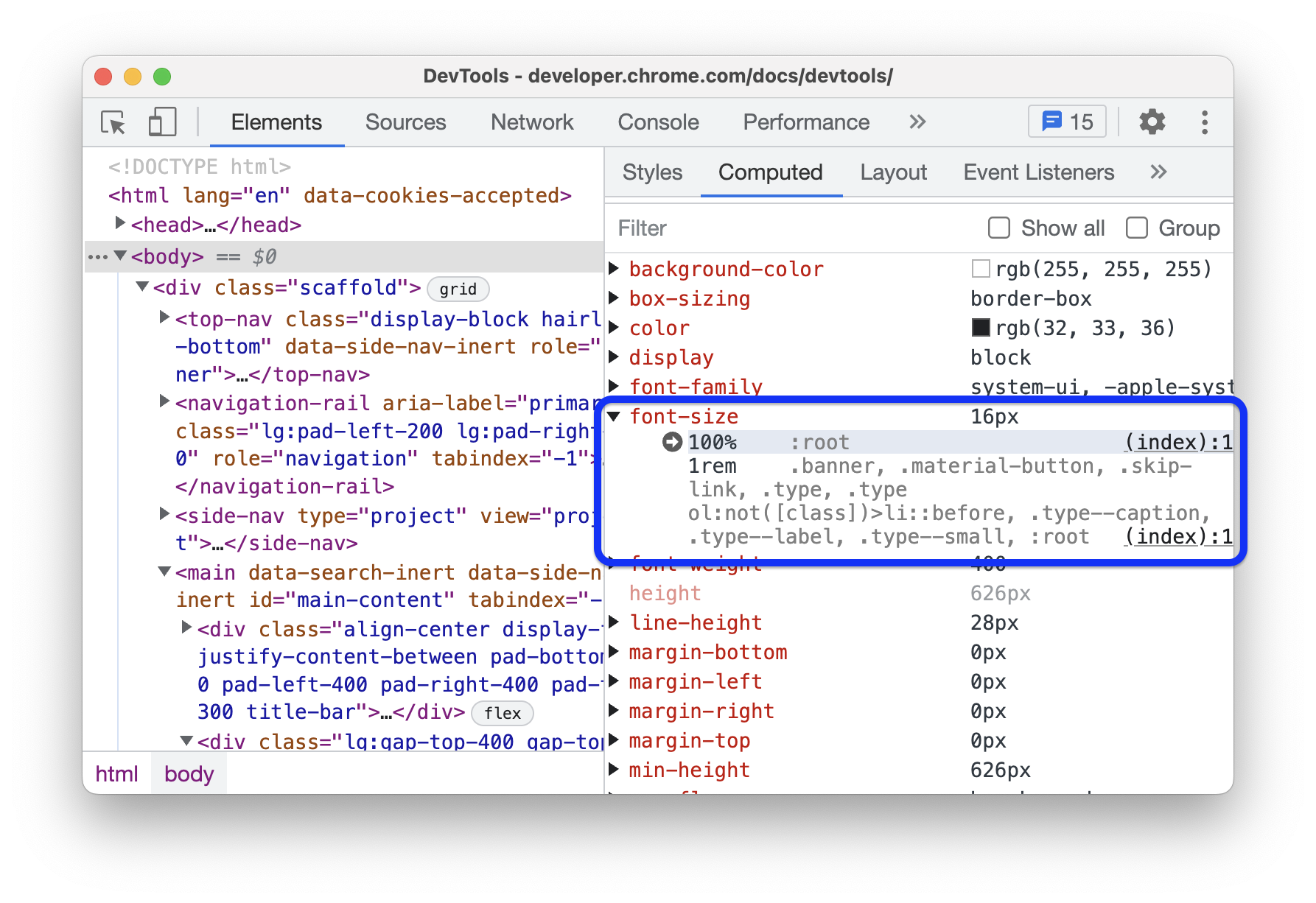 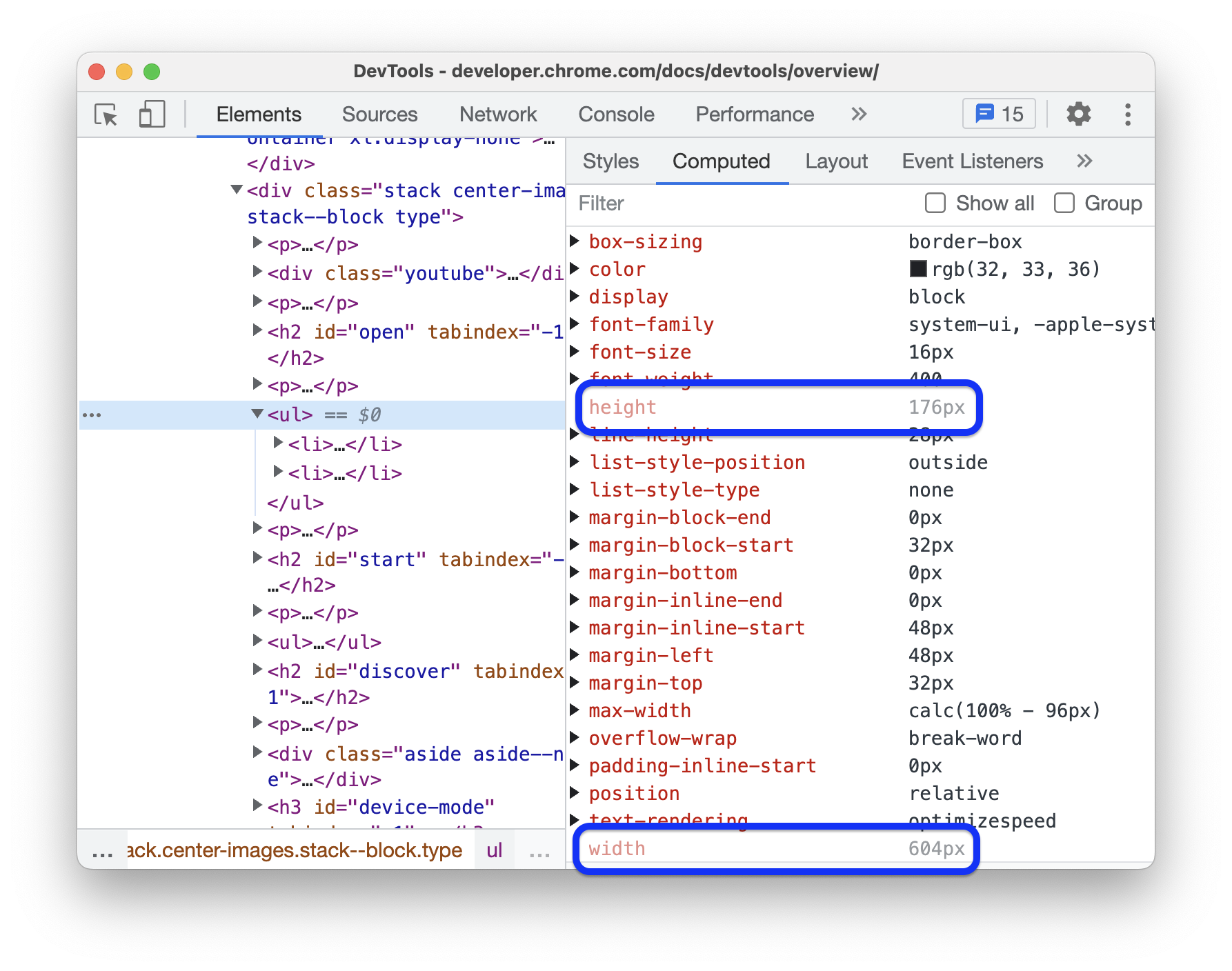 In this example, Chrome calculated the following for the <ul> element:

To make the Computed pane show all properties and their values, check

Show all. All properties include:

Overriding default inheritance doesn't affect the way the Computed pane displays the properties: pale or not. 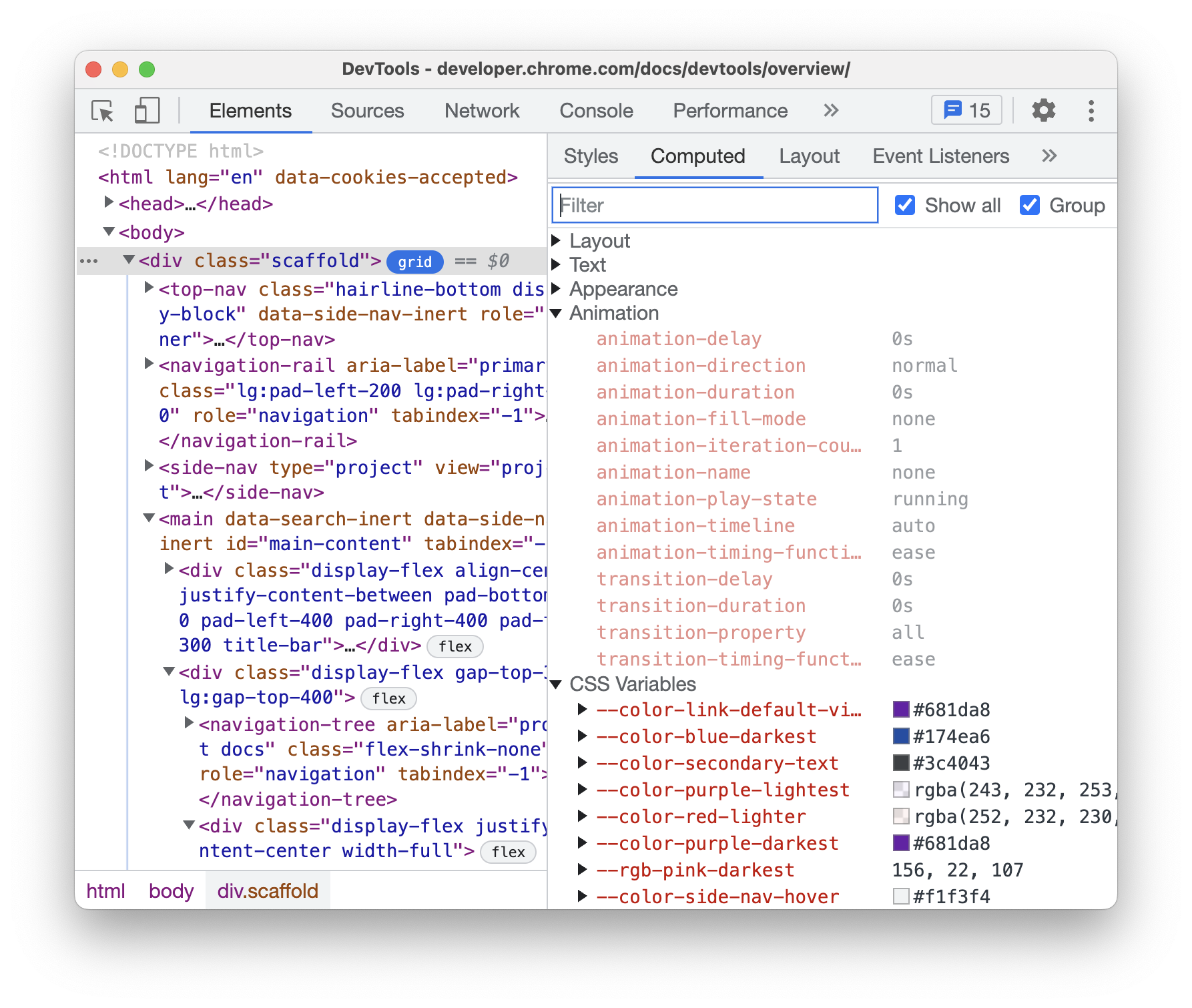 To investigate a specific property and its potential duplicates, type that property name in the Filter textbox. You can do this both in the Styles and Computed panes.